Each year the parish in Guatemala where I serve as a Maryknoll Sister takes up a collection for the diocese to help the poor. Rather than contribute money, our parishioners contribute their newly harvested corn. It’s their staff of life, their food for the coming year. In fact, the Mayan people of Mexico and Central America call themselves “People of Corn.” The corn is sold in the market and the proceeds go to help needy families, widows and orphans. Such generosity is not uncommon among the poor. Once, when I needed to go to the health center for first aid, a woman I passed asked where I was going. On my way back she handed me a bag of sweet rolls with one hand and pressed 30 quetzales into my hand with the other. Thirty quetzales is the equivalent of about $2.50 and in San Gaspar Chajul is a half-day’s wage.
Bernice Kita, M.M.

The bare concrete walls easily revealed cracks throughout. Tiny beams of light pierced openings in the tin roof. Steaming hot ugali (thick porridge) and fried dagaa (tiny dried fish) sat between us.
Serving with the Maryknoll Lay Missioners in Tanzania, my wife, Ashley, and I were invited to the home of a neighbor in Musoma, where we studied Swahili. We greeted all nine members of the family individually as is custom, and sat under the shade of a tree outside—surrounded by chickens, ducks and goats—chatting as best we could in Swahili. Awkward pauses abounded, but we continued the conversation by drawing pictures in the dirt with the children. Soon we were invited inside to eat. The family members stayed outside, eating nothing, while we ate food prepared especially for us. We were overwhelmed and humbled by their generosity. This family gave not from their surplus, but from their poverty.
Michael Leen, MKLM

One day in Hong Kong, a fellow called me up and asked if I would come to see his mother, who wanted to be baptized. I went and found that she was 96, nearly deaf and nearly blind. When I asked her why she decided at her age to seek baptism, she told me a fascinating story.
“I was the second of three wives of a wealthy Chinese business man,” she said. “He and the other wives have died. I have just this one son, the greatest son in the world. When I die, I want to go to the same heaven he goes to, not to the one where the other wives and their kids go. They were constantly fighting over my husband’s money and life was not pleasant at all. When can I be baptized?”
Our pastoral Sister taught her each week and I went a couple of times, too, but the woman couldn’t remember anything from one week to the next. I asked the Sister to try to teach her just the basics of the sacraments. After two months we decided she was as ready as she would ever be. She was almost radiant and couldn’t thank us enough as her son, his wife and son, and a couple of her friends joined her. She’s the oldest person I’ve baptized in 54 years as a priest, and perhaps one of the most inspiring.
Elmer Wurth, M.M.

After a long journey from the United States, I arrived early in the morning at the airport in Dar es Salaam only to find my flight to another area in Tanzania had been delayed for six hours. I decided to rest at a hostel about 30 minutes from the airport. As I pushed a cart with my luggage and guitar to find a taxi to the hostel, a man in his early 50s offered to help. I told him where I was going and he offered to drive me.
As he drove, we talked. I found out about his family and his work at a safari company. He asked what I was doing in Tanzania. I told him I am a missionary Sister doing ministry with orphans, HIV/AIDS and women’s groups.
Near the hostel, he handed me five $100 bills and said it was his contribution for my mission. Later, I sent him a text message thanking him again. He replied: “Thank you very much for being a genuine and committed ambassador of our Lord and Savior Jesus Christ. You are blessed for life.”
Genie Natividad, M.M. 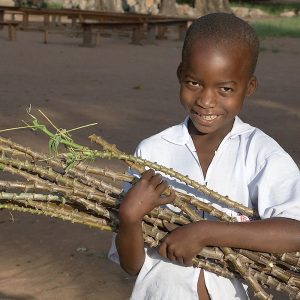 Missioner Tales March & April 2015 In Tanzania, where I serve as a Maryknoll lay missioner, it is not uncommon in the rainy...

Mar 1, 2015
Copyright 2020 Maryknoll Fathers and Brothers. All Right Reserved.
Back to top