While working in Hokkaido, Japan, in the 1970s, Maryknoll Father Richard Kardian printed flyers inviting the neighbors to come learn about Christ and the Catholic Church. Parishioners distributed the flyers to houses in the area. Only one person came, a young man named Taiji Katsuya, who happened to find a flyer that had been thrown away. Eventually he became a Christian and when he was baptized, he took the name of Bernard. Later, Bernard Taiji Katsuya entered the seminary and was ordained to the priesthood. On Oct. 14, 2013, I was privileged to attend his consecration as the newest bishop of the Diocese of Sapporo in Hokkaido.
Roberto Rodriguez, M.M.

My husband and I live near a market in Mwanza, Tanzania, where we serve as Maryknoll lay missioners, so we often see the same people every day. As is the custom, we greet each one individually every time we meet them. Although it’s nice to be greeted, it’s easy to get weary of the same conversations, day in and day out.
One day, I had a breakthrough in my understanding of these daily greetings. I was walking by an older woman who was selling charcoal and I stopped to chat. We went through the usual conversation and I went to walk away.
“Asante!” she yelled out. “Thank you!”
“Why?” I yelled back.
“Thank you for greeting me!” she called.
That simple response demonstrated to me the importance of relationships and community in Tanzania, which are built one conversation at a time.
Ashley Leen, MKLM

One day while serving as a missioner in El Salvador, I bought several large plastic washbasins at a market some miles from my house. To get home, I needed to take two buses and walk about four blocks. The buses were crowded and I couldn’t get a seat, so I needed to put the washbasins on my head. Walking home, I decided it was easier to continue to carry the washbasins on my head, like the Salvadoran women carry loads. On my walk, one of the security guards I knew yelled out to me: “Deborah, you look like a Salvadoran woman!” What a compliment! To truly begin to fit into a new culture, it is necessary to adapt to the circumstances and try new ways of doing things.
Deborah Northern, MKLM

Manuel, a faithful eucharistic minister and visitor of the sick in Guatemala, where I am in mission, had a persistent eye problem. He had gone to an eye doctor in the next town several times to relieve redness, tearing and pain. Over a year ago he borrowed 400 quetzales (about $50) for another trip to the eye doctor. I had him sign a receipt. When people borrow money from me, they rarely repay it although they insist they will.
Recently Manuel came to see me. Recalling his previous request, I thought, “He wants another loan.” Was I wrong! Manuel handed me three tightly crumpled 100 quetzal bills, and apologized for taking so long to repay. He said he was grateful for the loan and that his eye was better. He hoped to find work to be able to put aside a little at a time to pay off the remaining 100 quetzales. I was so embarrassed for my underestimation of Manuel. Remembering all those supporters who have contributed over the years to my mission so that people like Manuel can receive medical and other aid, I told him the rest of his debt was cancelled.
Bernice Kita, M.M. 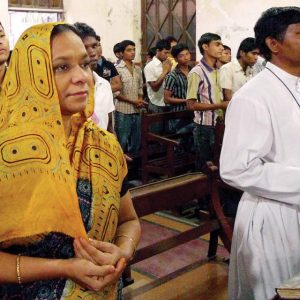 Missioner Tales May & June 2015 Each year the parish in Guatemala where I serve as a Maryknoll Sister takes up a collection...

May 1, 2015
Copyright 2020 Maryknoll Fathers and Brothers. All Right Reserved.
Back to top