Maryknoll Father works to create capitalism with a conscience

Constructing the Kingdom of God here on earth takes dedicated builders. “Most people are afraid to do this kind of work,” says Maryknoll Father Joseph La Mar of his ministry, promoting corporate social responsibility. “You just have to sit at the table and say what you have to say.” His work takes him to high-level board meetings of multinational corporations where he invokes the Gospel to voice ethical concerns in commerce.

As assistant chief financial officer for the Maryknoll Fathers and Brothers, for 23 years Father La Mar has represented the shared values of the Maryknoll Society and the Interfaith Center on Corporate Responsibility (ICCR). The ICCR is an alliance of 300 religious and institutional investors with stock ownership in major corporations. This gives them an investment portfolio worth over $100 billion and a collective voice in the boardrooms of major corporations. 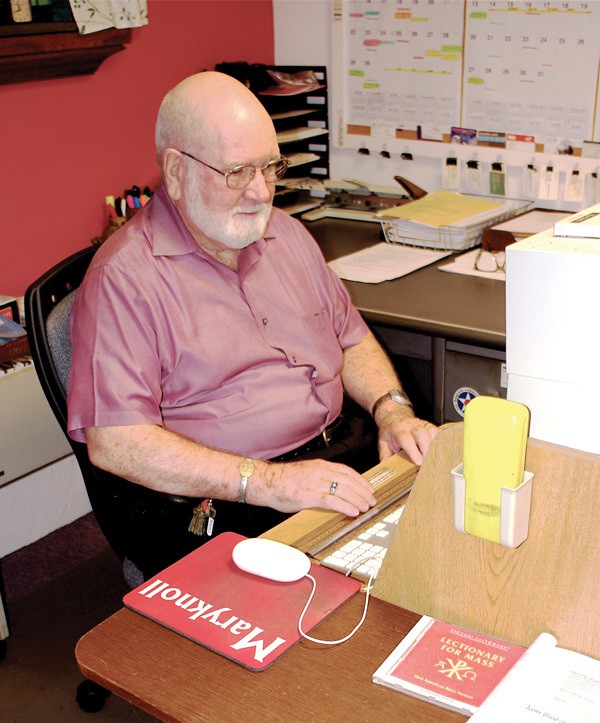 As shareholders, La Mar and his ICCR colleagues introduce “proxy resolutions”—petitions for shareholders to vote on—that advocate actions like: ensuring living wages, preserving the environment, protecting worker rights, eradicating child labor and human trafficking, and ending predatory lending and money laundering; or, as ICCR documents state, upholding “the principle of the common good and the integrity of creation.”

In 2015 the ICCR introduced 227 resolutions—almost one-third dealing with mitigating the effects of climate change. Chevron and Exxon both received the most proxy resolutions, including calling for disclosure of their hydraulic fracturing practices, or “fracking.” Bank of America, Boeing, Capital One, Comcast, Google, Lockheed Martin and Monsanto were among the companies receiving ICCR resolutions calling for disclosure of how much they spent on lobbying U.S. legislators.

“I call it atheistic capitalism, where there is no God but money,” says Father La Mar of the dominant globalized system of trade. His job, described as “creating capitalism with a conscience,” has led him to appear on CNN and CBS, to be quoted in The New York Times, The Wall Street Journal and The Washington Post, and to be heard on National Public Radio and local stations across the nation. His work has taken him overseas, but mostly he travels to Wall Street. 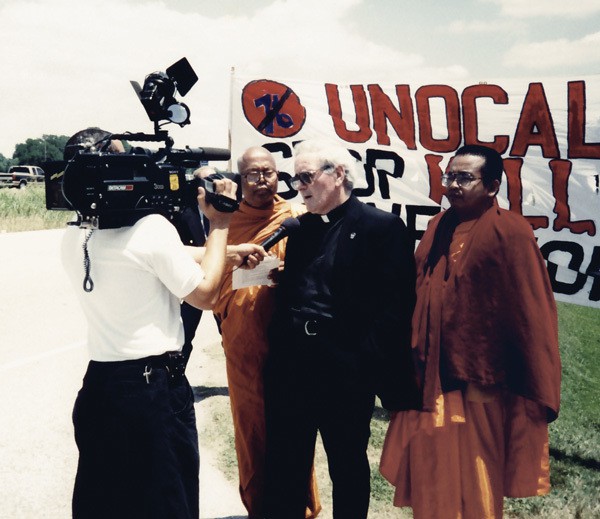 Father La Mar got media attention in the 1990s when he challenged Unocal not to build a pipeline in Burma, then a military dictatorship. (Maryknoll Mission Archives)

On one Monday in July, Father La Mar, 81, met with the executive directors of Citigroup for two hours, then Bank of America for two hours, to work on basic codes of ethical conduct for their employees. “We’ve been working on the banks for so long,” he says, on issues ranging from risk management to executive pay. Then he spent five hours strategizing with his colleagues at the ICCR on resolutions to further business ethics.

Along with proxy votes, Father La Mar says, the boardroom battles are advanced through patient persuasion in the hopes of achieving a transformation, or metanoia—a spiritual conversion of the heart. This is possible, he says, through personal encounters where one is brave enough to share truths that executives and shareholders might not hear otherwise.

One of Father La Mar’s battles took him 12 years, but he was able to convince Unocal, an oil extraction company, not to build an oil pipeline through Burma during the 1990s, when a military regime had overtaken the elected government. Though some form of democracy has returned to Burma, or Myanmar, Unocal was eventually bought out by Chevron and the oil pipeline was built. As a result, in just one 2015 resolution for Chevron, ICCR documents “egregious human rights abuses by Burmese troops employed to secure the pipeline area, including forcible relocation of villagers and use of forced labor.” 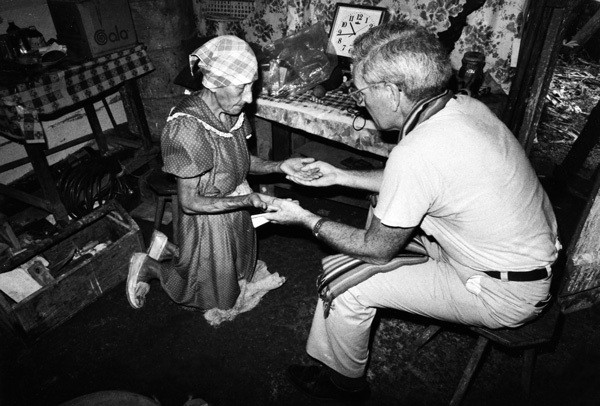 As a missioner serving indigenous people in Guatemala, Father La Mar was inspired by their faith in the face of death and destruction. (Maryknoll Mission Archives)

It takes a particular kind of steel to be the voice of the voiceless. But when Father La Mar speaks, people tend to listen. He once told a business owner making plans to pack up his sweatshop in Guatemala and move it to Vietnam or China, where worker protections are even less restrictive: “Do you think there’s somewhere in this world that we can’t find you? We’re not bound by territory here; you’ve got to make things right.” La Mar, a U.S. Air Force pilot for 20 years, spent a decade airlifting the bodies of dead soldiers during the Vietnam War. But he doesn’t think it’s his military background or the priestly collar he wears in the boardroom that cause people to listen. He believes it’s his experiences as a missioner, which began when he joined the Maryknoll Society at the age of 39 in 1973.

His first overseas mission assignment took him to the jungles of Guatemala to work with the Mayans from 1983 to 1989, when the genocidal expulsion of indigenous citizens by their military cost 250,000 lives. “It didn’t take much to get you killed there,” says Father La Mar, who escaped death on more than one occasion during those years. In the Petén, the lush northern expanse that borders Mexico, he witnessed as the headless body count of indigenous from his own parish began to rise, and saw the Guatemalan military pushing his parishioners from their fertile farmlands, where commercial tobacco agribusinesses later moved in.

“I started seeing the real effects that U.S. government policies have on other cultures,” he says. He cites the North American and the Central American Free Trade Agreements (NAFTA and CAFTA, respectively), which brought a surge of maquiladoras—manufacturing plants—that were supposed to raise the standard of living for locals by providing needed jobs. Instead, La Mar investigated the ongoing abuse of maquiladora workers in Guatemala who were often paid “much less than a living wage,” he says. Too often when the government of a developing country convinces multinational corporations to invest there by guaranteeing “no labor strife,” he says, “that translates into sending in the military to torture and ultimately kill people.” 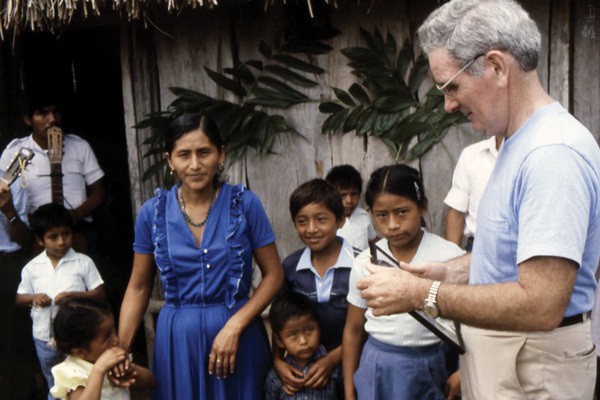 As he fights injustice today, Father La Mar recalls Guatemalan parishioners who were victims of unjust structures some 30 years ago. (Maryknoll Mission Archives)

This, he explains, is why activists tried to quell the U.S.-Colombia trade deal, approved in 2006 despite Colombia’s human rights record. Today, Jesuit Father Javier Giraldo writes from Colombia of “the permanent genocide” of communities that dare to resist the “latest megaproject.”

This is also why the Maryknoll Office for Global Concerns and other social justice advocates are struggling against the Trans Pacific Partnership (TPP), a global trade deal that would lower barriers to globalization and allow corporations the right to sue sovereign nations for environmental regulations that infringe on potential profits.

Father La Mar points to the work of Pope Francis, who has been steadily chipping away at the veil of ignorance surrounding the negative consequences of commercial globalization, articulated in his ecological encyclical Laudato Si’. The pope challenges us to “construct a humane alternative to a globalization which excludes.”

Like Pope Francis, Father La Mar counts on the next generation to continue building God’s Kingdom on earth by being the voice of the voiceless.
Despite the odds, Father La Mar remains hopeful. “Of course, we’ll win in the long run,” he says. “It’s Gospel teaching!”

[…] To read the full article on Father La Mar’s work in English: https://maryknollmagazine.org/2016/01/constructing-the-kingdom/ […]

Dear Msgr. Lopez: We are very happy you liked the article on nonviolence. Please feel free to share this article and any others in the future as you wish. 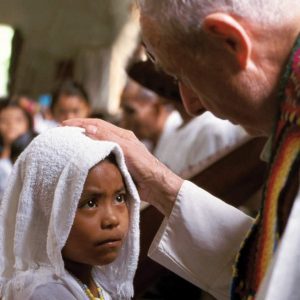 Missioner Tales, November & December 2015 I was deeply touched by the visit of three children—María, Enderson and Domingo—to...

Nov 1, 2015
Copyright 2020 Maryknoll Fathers and Brothers. All Right Reserved.
Back to top