Nora Ruiz was living out her call to be a missionary disciple even before Pope Francis issued that call to all Christians in his 2013 apostolic exhortation The Joy of the Gospel. She is dedicated to making young people aware of their mission vocation.

When high schoolers in St. Brigid’s parish in San Antonio, where she is youth minister, told her they wanted to form a mission group, she embraced the challenge of helping them. She sought Maryknoll resources to begin their theological formation.

She led them to test their call in their parish, repairing the walkway through the outdoor Stations of the Cross. “They need to grasp that God’s mission is love, and that all they do in love, no matter how seemingly insignificant, is a sharing of God’s mission,” she says.

She next facilitated their joining a citywide effort to provide Thanksgiving dinner for residents who might otherwise be alone. Leaving their own family gatherings to help others was a big step for the youth, she says.

Determined to take them beyond their neighborhood, Nora contacted me. I proposed we explore together the needs of people two hours southwest of San Antonio, recently devastated by floods.

Nora experienced the importance of local partnerships in mission, discerned service options and then organized a weeklong mission trip for her youth group to Eagle Pass, where I accompanied them. While the youth repaired a flood-damaged house, we taught them to consider life on the U.S.-Mexico border through the lens of Catholic Social Teaching.

Nora was now ready to take the group on her own to another border city four hours south of us, McAllen, Texas. There the youth worked for a week with children in summer programs sponsored by Arise, a grassroots organization that empowers poor women and their children.

“Our youth experienced how the poor can be agents of their own transformation with the Church’s assistance,” Nora reported.

Soon the youth-turned-young-adults wanted to experience mission outside the United States, and Nora again contacted me. “I don’t recommend you take them someplace you haven’t personally visited,” I told her and invited her to join me during Christmas vacation in the Salvadoran village of Ellacuria, where I lived from 2000 to 2006. Nora jumped at the chance.

The Salvadoran youth I had been mentoring through their university studies via email and Facebook welcomed us. We spent a memorable Christmas celebrating with spiritual traditions, including the posadas (processions re-enacting the journey of Mary and Joseph to Bethlehem). Nora listened to testimonies of the elders who lived through the decade-long civil war and their memories of martyred Archbishop Oscar Romero.

On the flight home, I asked Nora how she thought her young adult group might be of service to the village of Ellacuria. “I realize they need to visit first,” she said, “and experience that mission is first and foremost about personal encounter. Any service project would come after that.”

In addition, older members of St. Brigid’s have joined the youth in raising funds for a new English class in Ellacuria village, where the youth are getting to know their U.S. counterparts through social media. Nora’s mission has multiplied!

All Shall Be Well 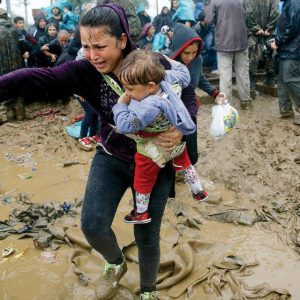 Jesus is clear about how we are to respond to newcomers in need when he says, “I was a stranger and you welcomed me”...