Jesus is clear about how we are to respond to newcomers in need when he says, “I was a stranger and you welcomed me” (Matthew 25:35).

Today, in dozens of countries around the world, war, threats of violence and entrenched poverty push record numbers of people—close to 60 million, according to the United Nations—to seek safer homes.

The global migration crisis is one of the worst humanitarian disasters since the 1940s, according to the Integrated Regional Information Networks (IRIN), an independent news agency, formerly connected with the United Nations, that reports on humanitarian stories worldwide.

Pope Francis named the “globalization of indifference” as a part of this crisis. In 2013, more than 300 Eritrean and Somali refugees drowned one-half mile from the coast of Italy. In a homily during a Mass for the victims, Francis said, “These brothers and sisters of ours were trying to escape difficult situations to find some serenity and peace; they were looking for a better place for themselves and their families, but instead they found death. How often do such people fail to find understanding, fail to find acceptance, fail to find solidarity. And their cry rises up to God!”

In 2014, tens of thousands of Central American migrants, including unaccompanied children from El Salvador, Guatemala and Honduras, crossed the Rio Grande and turned themselves in to the U.S. Border Patrol. Buses carrying some of these women and children to federal facilities in California and Arizona were blocked by protestors with signs that read “illegals out.”

“We must not be taken aback by their numbers,” Pope Francis said of migrants in his speech to the U.S. Congress in September, “but rather view them as persons, seeing their faces and listening to their stories, trying to respond as best we can to their situation.”

Syria is now the world’s biggest source of refugees. In the past five years, more than 4 million people have fled Syria to escape civil war and ISIS, which in November broadened its terrorist reach in attacks in Beirut and Paris. These attacks prompted some U.S. politicians to call for denying entry to Syrian refugees or limiting it to only Christians. In response, the Maryknoll Office for Global Concerns reiterated the message it sent to Congress in October 2015 along with more than 400 religious leaders, stating: “Vulnerable individuals from a host of religions, ethnicities and backgrounds have been and should continue to be resettled in the United States.”

The United States has resettled about 1,800 Syrian refugees since the start of the war in 2011, and President Obama has committed to accepting 10,000 more in 2016.

“Faced with the tragedy of tens of thousands of refugees who are fleeing death by war and by hunger, and who are on a path toward a hope for life, the Gospel calls us to be neighbors to the smallest and most abandoned, to give them concrete hope,” Pope Francis said when he called on Europe’s churches to take in refugees.

We are all called to respond not only as Christians but also as members of the human family.

Share with your parish
resources on a wide range of topics related to immigration, prepared by the Justice for Immigrants Campaign.

Learn
ways to help by reading “10 Ways to Welcome the Children at Our Border” published by CLINIC.

Featured Image: A Syrian refugee woman cries as she carries a baby through the mud to cross the border from Greece into Macedonia in September. (CNS/Y. Behrakis, Reuters) 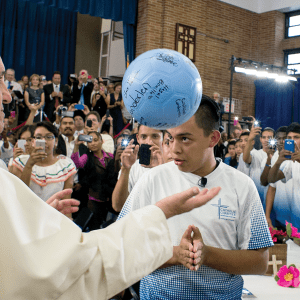 HUMBLING INSPIRATION I never fail to be inspired by reading Maryknoll magazine. The lives of the missionaries and those...