" /> Healing The Hands That Feed Us | Maryknoll Magazine

Healing The Hands That Feed Us

She remembers one black grandmother who, despite oral cancer, wouldn’t keep her appointment to see a specialist if it meant missing work in the fields. “She said to me, ‘Honey, you don’t understand. I have 11 grandchildren in Florida. If I don’t pick, they don’t eat,’ ” Sister Englerth recalls.

Over the years, she says, her commitment to migrant farmers deepened as she recognized the irony that many of these farmers who provide fresh food for our tables live in extreme poverty and food insecurity themselves.

As director of migrant health at Keystone Health, a multi-faceted medical center serving the poor, Sister Englerth and her team, under the direction of the program’s medical director, Dr. Jason Garcia, treat migrant farmers for medical conditions resulting from work that puts them at risk to pesticide exposure, muscle strain, lacerations, exhaustion, and overexposure to the sun, irritants and allergens. She and her team of physician assistants, nurse practitioners and nurses conduct health screenings, monitoring blood pressure, glucose levels and chronic ailments that could be fatal if left unchecked. 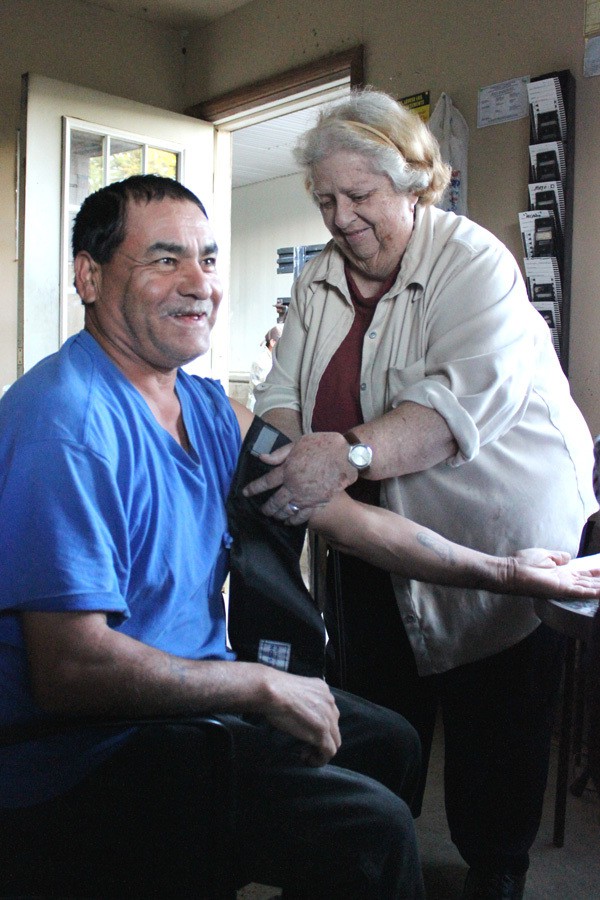 It was in the 1970s while serving in mission in the Andes Mountains of Peru that Sister Englerth felt called to be a health provider. Working among Aymara indigent communities as part of a pastoral team, she saw the dire need for disease prevention and treatment in remote areas with no access to medical care. Enrolling in St. Louis University, she earned a degree as a physician assistant and returned to Peru to train health workers.

Called home to care for her ill mother in 1985, Sister Englerth became aware of the medical needs of migrant farmers right in her home state. When she learned that a woman named Joanne Cochran and a local doctor, Edward Zuroweste, were running a small clinic for migrant farmworkers in Chambersburg, Pa., she called them and said, “I speak fluent Spanish and want to know if I can be of help.”

For a year Sister Englerth worked at the clinic, providing health care not just to migrant farmers but also to other poor and uninsured patients. She returned to Peru in 1986, the year that Cochran secured a federal grant to formally establish the Keystone Rural Community Health Center in Chambersburg, providing health care to some 500 patients. Today the Keystone migrant health network has grown to a large workforce, serving migrant and seasonal farmworkers and their families in five sites and mobile health programs in 36 of the 67 counties of Pennsylvania.

Sister Englerth, who worked as state program director for Keystone from 1998 to 2003, served for five years training health promoters in Guatemala and then returned to work at Keystone. “I actually stepped back into the same job as when I left!” she says.

“Keystone has developed many wonderful and lasting partnerships over the years because of Mary,” says Joanne Cochran, president and CEO of the Keystone Rural Community Health Center. Though Sister Englerth has had several eye surgeries for glaucoma, nothing stops her, says Cochran. “Mary has been clinical director, advocate for the farmworkers and their families, cheerleader and educator for staff, occasional cleaning lady, and even the bank for many of the migrant families who had no money for medication,” says Cochran. 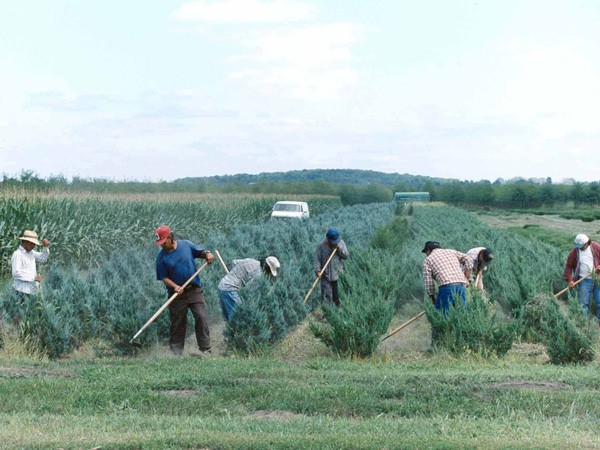 Laboring in the fields puts farmworkers at risk to muscle strain, overexposure to the sun and other health hazards. (NCFH/A. Pogue/U.S.)

While Sister Englerth works primarily out of the Keystone Health clinic in Adams County, Pa., three nights a week she drives out to visit one of the 82 migrant camps in Adams County—or beyond. “The mailman has nothing over on her,” says Cochran. “She will drive 100 miles for a group of migrants who need care.”

Sister Englerth says she likes visiting the camps because it gives her a chance to talk with the women, who are often just as grateful to have someone speak with them and discuss their problems in their own language as they are to receive the medical aid they need. She teaches the women nutrition, pre-natal care and the importance of disease prevention, much as she did in Guatemala and Peru. “The gratitude in people’s eyes for the little bit we can do … it’s reciprocal, it really is,” says Sister Englerth.

Through Keystone, she also conducts health education for youth in the migrant camps. During the summers, in the middle of harvest season, she and her team of physician assistants receive Pennsylvania students from several universities who come to do a clinical rotation. “It shows them the real disparities of health care in the United States,” she says. Though training them is a lot of work, she says she does it “because hopefully they will see and not forget…our poor in our country.”

Sister Englerth has won many awards for her work, but she says, “It’s awkward getting recognition for doing work you love doing.” Perhaps the highest honor, in her eyes, comes from the farmworkers themselves. She was doing health screens on farmworkers in Bedford County when one of them said, “We know why you come out to see us here in the camp: you are one of us.”

Photos of migrant farmworkers in the fields by Alan Pogue, courtesy of National Center for Farmworker Health, Inc., www.ncfh.org 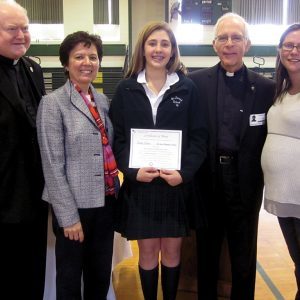