GO FOR IT!
I was a seminarian and a priest in the diocese of Syracuse, N.Y., with Father Michael Bassano, and to see him in the pages of MARYKNOLL magazine is always a delight. He is the same joyous, faith-filled person I first knew 40 years ago. His joy-filled, creative and love-giving smile that those of us in this diocese knew all those years ago now edifies all who know him in these pages. All we can say is: “Go for it, Mike. You bring us all into that larger world that longs for your great gifts and light!”
Dave Pasinski
Fayetteville, New York

WONDERFUL GIFT
I enjoyed Father Jeremiah Burr’s story in the Missioner Tales section of the March/April 2016 issue of MARYKNOLL magazine about the little boy who stole a Communion host in the Philippines. My newest grandson has a Russian mother, and in the Eastern Rite Church when young children are baptized, they also are confirmed and can receive their First Communion. The message I received from Father Burr’s tale is the little boy was sharing in the wonderful gift that Christ gave us at the Last Supper.
Peter Winkler
Schroon Lake, New York

ALL OF YOU
In the Missioner Tales section of the March/April 2016 issue of MARYKNOLL, Father Jeremiah Burr relates how a child of 3 or 4 years outfoxed him and snatched a Communion host from the ciborium and ate it before he could be stopped. Father Burr believed that the child was actually seeking a blessing, which caused Father Burr to drop his guard. This letter raises several interesting points.

First, a blessing is no substitute for receiving the Body of Christ, whether the communicant’s arms are crossed over his chest or not. The practice of publicly declaring oneself unfit is degrading to the person wishing to receive Communion. We should not say, “Lord, I am not worthy,” but rather, “Lord, I am now worthy.” That was purchased for us by the crucifixion and death of Jesus.

Secondly, the child receiving Communion does not have to be able to recite the standard prayers or Baltimore Catechism, but only know he is receiving Christ’s Body and not a piece of bread. Many adults who question the real presence of Christ in the Eucharist receive Communion regularly and devoutly, without anyone questioning their fitness to receive him. Any child wishing to receive Communion should be allowed to do so, regardless of age. Who can be more innocent than a very young child?

There should be no human-made criteria to test that fitness; merely presenting oneself at the reception should be sufficient. Obstacles such as fasting and being in the state of grace ignore the fact that the first reception of Communion occurred during a Passover supper, and that sanctifying grace did not exist before the institution of the Eucharist and the Crucifixion. To restrict who may and may not receive Communion is to ignore our Savior’s mandate, “Take this ALL of you and eat/drink of it.”
John Kearney
Hayward, California

FELLOW FALLEN HERO
I am a longtime donor to Maryknoll and thus receive your magazine. I confess I don’t always get a chance to read the complete issue, but luckily was able to read the January/February 2016 one that included the “Mercy in Battle” article about Father Vincent Capodanno. I knew the name was familiar and realized upon reading the article that my friend and fellow retired Navy nurse Shirley Peters had mentioned it. Her brother Sgt. Lawrence Peters was a Marine in the 3rd Battalion and was converted to Catholicism by Father Capodanno. Larry was killed the same day in the same battle as Father Capodanno and was also posthumously awarded the Congressional Medal of Honor. You can read his citation on the website at www.cmohs.org.
Patricia M. White
Orlando, Florida

STOP IMMIGRATION
Your January/February 2016 issue of MARYKNOLL presents two different approaches to resolve two apparently different global problems, or are they the same? The solution proposed to address the immigration issue is to accept the status quo and burden the faithful with the cost of this great tragedy, while the solution to corporate greed and abuse is to confront it through the work of Father Joseph La Mar and the Interfaith Center on Corporate Responsibility. This is the approach called for in the Bible, to go forth and preach the Gospel.

Your approach to immigration appears to condone the bad policies and behavior of nation after nation and accept refugees with open arms. But don’t we in the United States advocate trade treaties that result in the Central American countries invoking harsh laws and treatments on their people to comply with and promote trade globalization? Just as Christ challenged the Pharisees, and was crucified for it, shouldn’t the Church address the root cause of immigration and challenge governmental bad behavior rather than place this refugee burden on the faithful?

As I read between the lines, you suggest that immigration to the United States from Central America is self-inflicted by our trade agreements, which force many people to migrate to the States to seek jobs and safety. Please devote an article to better explain this, so we know what action we should take to release us and the immigrants from this horrendous burden.
Jim Altman
Seattle, Washington 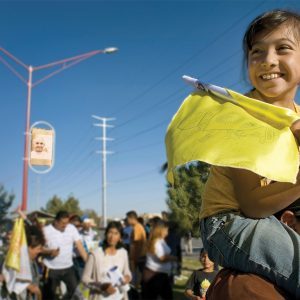 Today's Good News, May / June 2016 || It was the last day of Pope Francis’ recent visit to Mexico when he celebrated...

May 1, 2016
Copyright 2020 Maryknoll Fathers and Brothers. All Right Reserved.
Back to top