CHAINED LIKE ANIMALS
The story and pictures of the mentally ill men in Cambodia in the July/August issue of Maryknoll magazine were disturbing. Although Cambodia may be an underdeveloped country, to see photos of men chained to wooden posts like wild animals in the year 2016 was incredible. In the United States, animals receive better care and treatment than those forgotten Cambodian people.
That the Cambodian culture looks the other way concerning the mentally ill is inexcusable. To blame the mental illness on events that occurred in Cambodia almost 50 years ago is also a weak excuse to condone the lack of proper treatment. Perhaps Maryknoll can spearhead a new campaign with the Cambodian government and the United Nations to provide medical treatment including drugs to curb violent behavior and housing for Cambodian’s mentally ill. Congrats to Maryknoll for their work in Cambodia and to Maryknoll magazine for exposing this human travesty. Remove the Chains!
Joseph P. Nolan
Waterbury, Connecticut

DISRESPECTFUL
In the July/August Maryknoll magazine the article titled “Chained in Cambodia” is disrespectful to the mentally ill patients whose pictures and names are manifest in the article and whose problems with toileting and individual mental health problems are exposed.
Writing about the problems of the mentally ill in the Southeast Asian nation is acceptable; however, it is not acceptable to take pictures of the mentally ill or to reveal their names and individual symptoms and pictorially reveal their chained situation.
Adrienne Trinchero
Challis, Idaho

Editor’s note: Thank you for your concern for the dignity of the mentally ill people pictured in our article about the work of Father Kevin Conroy to help them receive the medical treatment they need, with the hope that they will eventually be unshackled. It was not our intension to offense anyone, but we felt use of the photos was essential to show the situation graphically. Please rest assured that Father Conroy, who has a doctorate in clinical counseling, is extremely sensitive for the feelings and wellbeing of these mentally ill and is working tirelessly to improve their condition. All the patients pictured were aware that they would be featured in an article with the purpose of raising awareness of their situation. Some patients’ names were used with their permission, while in other cases they preferred not to be identified in the photos.

NURTURING TALENT
I’m an avid runner and indeed blessed to have the ability to do so in 5– and 10–kilometer events. A feeling of freedom envelopes me while participating in locally organized races, and my heart soars while on the course. It’s a gift from God. While serving in Kenya, Maryknoll Father Richard Quinn saw potential in Kenyan runner Edward Cheserek, who was featured in the March/April 2016 Maryknoll magazine. Father Quinn helped Cheserek, currently a star University of Oregon runner, to embrace his “life skills” potential, and Cheserek’s accomplishments at NCAA meets are breathless in scope and effort, to say the least. In the past I wrote a column for another publication about East African runners that reflected on their distance skills, which are world class and leave me to think of the speed and grace of gazelles. Good luck to this future Olympic hopeful!
Mark A. Sleboda
Redford Township, Michigan

IMMIGRANT ANEW
I am sure that when Pope Francis says he knows about what it is like to be an immigrant, he is referring to the fact that his parents were immigrants from Italy to Argentina. But Pope Francis is an immigrant too—from Argentina to Vatican City!
Thomas Diemer
Kenner, Louisiana

ALWAYS MARYKNOLL
In the 1940s, my father, Raymond Hulsair, worked for New York Telephone Company out of the Ossining garage. He worked at both Maryknoll Fathers and Brothers and the Maryknoll Sisters. My mother was Catholic and my father wasn’t, but he always made sure that the family got to Mass. My dad eventually converted to Catholicism and he and I were confirmed together in May of 1949. He was devoted and attended Mass regularly. Unfortunately, he passed away at the age of 46 in December of that year. I was 13.
Maryknoll magazine was always in our home. I believe that he saw the goodness in the priests and Brothers and the Sisters at Maryknoll when he worked there and in the Sisters at St. Agnes Hospital in White Plains when he was hospitalized and decided that he wanted to become a Catholic. Maryknoll has been and will always be in my life.
Eleanor Leidig
Kingston, New York

WELCOME CONTRAST
Thank you for the story on Nepal. It was such a welcome contrast to what is in our newspapers every day. Please continue to pray for the repose of the soul of my husband, Charles.
Phyllis Council
Walnut Creek, California

AGENDA DRIVEN
Kudos to Ron Sagnella for his memo on human behavior as the cause of climate change in the March/April issue of Maryknoll. I fully agree that this is an “agenda driven” science where conclusions are cloaked in ideological beliefs rather than fact-driven science that may well refute desired results. Like him, I’m not denying global warming, but I question the measure of man’s impact versus Mother Nature’s and the arrogance surrounding it.
As a career-long agriculture professional, I’ve repeatedly witnessed a similar phenomenon with agricultural research: pre-determine the desired outcome then design the research to validate that conclusion. Mr. Sagnella addressed how the climate change movement has conflated pollution with man-made global warming. His argument is that pollution is a man-made problem and can be solved with appropriate actions and behavior modification. Climate change is quite a different issue that our behavior likely cannot and will not solve.
Mike Foley
Sauk Centre, Minnesota 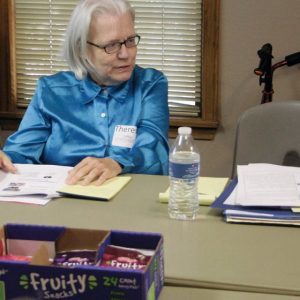 From the time she was a young girl in St. James Parish in Dallas, Texas, Therese Caffey wanted to be a missionary. || “When...