" /> Pardon and Mercy Among The Aymara | Maryknoll Magazine

Pardon and Mercy Among The Aymara

The Aymara people in the Andean highlands of South America are not particularly well known to outsiders for their mercy, and some observers have even painted them as rather vengeful. However, during my many years of working among the Aymara people in Peru and Bolivia, I never found them to be anything but merciful.

When I first celebrated Mass with them, I wondered why soon after Mass began some people would walk out of church. After a while of asking questions, I discovered what was happening.

The Aymara were taking Jesus’ words in Matthew’s Gospel literally,

This attitude of mercy and reconciliation was not limited to Mass. The Aymara have many rituals and prayer ceremonies that are performed at home, in fields or on mountaintops. Each of these ceremonies begins with a calling of all creation and all the powers of heaven and earth to accompany them in their prayer. That invocation is followed by a “pardon ceremony” in which all those who are present are called to ask for and to give pardon to all others, especially to those who have particularly offended them.  In the case of a major falling out, the feuding parties will leave the ceremony and reconcile themselves to one another just as they do at the Mass.

I witnessed this in a dramatic way when I was called to give the “Last Rites” to a young man whom I’ll call Pedro. He had broken his leg and was not expected to recover. But I needed to figure out why a young man who had only broken his leg would be expected to die. Much to their surprise, I substituted the Aymara healing ritual for the Catholic Sacrament of the Sick. I took the incense pot, which is used to call all of creation, and handed it to the local yatiri, an Aymara prayer leader, who accompanied me. He called on the fields, the crops, the medical clinic, school buildings and even the new road to accompany us in our prayers. We were now in a sacred space.

After I asked some discreet questions the situation became clear. Pedro, who did not own any land, earned his living by working other people’s fields and doing odd jobs. By breaking his leg, he could no longer do any of that. Instead of being a productive member of his community, he had become a burden. Since for the Aymara, balance and harmony in the universe are absolute necessities, Pedro´s inability to contribute to community life and duties could bring nothing but disaster. He no longer had a right or the will to live. So I was called to give the “Last Rites.”

Instead of giving Pedro Holy Communion and anointing him, I continued with the Aymara rite and we began the “pardon ceremony.” And there was a lot of pardoning to be done. They asked me to go home while the pardon ceremony continued. It took three days.

Pedro had to ask pardon for getting himself into that predicament and his family and community had to pardon him for not being able to fulfill his responsibilities. The community and his family had to ask Pedro for pardon for wanting to deny him the help he needed and he had to pardon them for rejecting him in his time of need. Everyone pardoned everyone else, and everyone was pardoned. They all had to ask God to pardon them for withholding mercy and forgiveness and for allowing the harmony and balance of the home, the community and the world to become distorted. It was a big job.

The healing took place; all that was lacking was for Pedro´s leg to get better.

Eventually, I was called back to the home, not to administer the “Last rites” but to celebrate the healing, reconciliation and mercy of Pedro and this Aymara family and community.

Francis McGourn, M.M.
Father Francis McGourn, from Philadelphia, Pennsylvania, served in Peru and Bolivia and was a former vicar general of the Maryknoll Fathers and Brothers.

Ripples in The Water 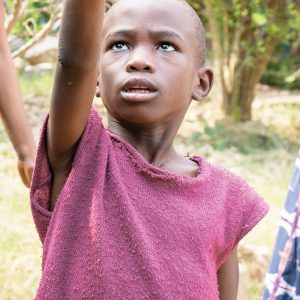 Reading another mother’s Mercy Moment in the May/June MARYKNOLL magazine about the compassion she experienced when her son was injured...