I first learned of the concept of accompaniment, of “walking with the people,” from the Maryknoll Sisters. This, I thought, is the ministry to which I am being called here in Nicaragua.

Initially, my walk was with the farmworkers of the state coffee farm of La Fundadora in the magnificent mountains of Matagalpa. Then I began to accompany urban women who were developing a service for their pregnant sisters from the countryside. Rural women with high-risk pregnancies needed to give birth in the regional hospital in Matagalpa rather than at home in their communities. Thus we developed the Casa Materna, or Maternity House. The Casa provides food, shelter, medical care, education and transportation to and from the hospital and follow-up for mothers in their home communities. Now, as I walk each morning with the pregnant mothers of the Casa, I still see my main ministry as that of accompaniment. It’s not so much the “doing” as it is the “being with” and listening that is important.
Catherine Madden, Maryknoll Affiliate

At the United Nations camp for internally displaced people in Malakal, South Sudan, where I serve people whose lives have been shattered by the county’s three-year-old civil war, we had a processional cross that we used every Sunday for our liturgical celebrations. In February the cross disappeared during an outbreak of fighting in the camp between different ethnic groups. We believed it had burned along with so many of the tents where the people were living. A few days later, though, one of the women of our camp’s Catholic community saw children playing with it.

She asked the children to give it to her and noticed the cross was badly burnt and Jesus’ left arm was broken off. She returned the cross to the church and we fastened it to a pole to be used for our Easter celebration. Even though the arm of Jesus was gone, I told the people that we are now the arms and hands of Jesus to reach out to one another in bringing peace to South Sudan.

The cross has become for us a crucifix of hope. Even though the people suffer, their resilience and vibrant faith are signs that God is with us, ensuring a better time to come in their lives.
Michael Bassano, M.M.

A supply ship had not come for a very long time to Likiep on the Marshall Islands where I served in mission, and our plans for Christmas treats were fading. Still, everyone decided they would chip in whatever they had so we could have a party anyway. What about Christmas cookies? No one had enough flour to spare, but in a modern-day version of the loaves and fishes, we collected a quarter of a cup of flour here and a quarter cup there and got enough for the simple dough. A wine bottle from church made a perfect rolling pin. There was a cookie for all on Christmas day!
Janet Hockman, M.M.

I was tired after working all afternoon in the sun at a health fair on the periphery of São Paulo, Brazil, where I serve as a Maryknoll lay missioner. I dreaded the two-hour walk/train/bus trip back to the city center where I live.

Entering the metro train feeling hot, rumpled and exhausted, I spotted one open seat next to a middle-aged Brazilian woman, who looked as if she had just finished her shopping for the day and was headed home too. As I sat down, I greeted her in my U.S. accent. She smiled and returned the courtesy.

Then my Brazilian seatmate reached into her shopping bag, pulled out a small bottle of Coke, unwrapped a straw, placed it in the bottle and handed me the drink. My expression must have been incredulous. She smiled as I took the bottle and drank.

We chatted for a while in my broken Portuguese. Then I handed her the half-finished bottle and she drank too.

Brazilians are known for their closeness, even with strangers, and this was a delicious example. As a new missioner in this crowded city, I am adjusting to much less personal space. That train ride and my new acquaintance may have helped shrink the personal bubble around me.
Jim Kott, MKLM

The Balancing Act of Feeding The World 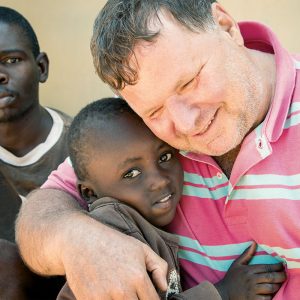