" /> A Lifetime of Healing | Maryknoll Magazine

A Lifetime of Healing

Neither war nor disease prevents a Maryknoll Sister from soothing lives on three continents.

Maryknoll Sister Joan Sauvigne was in South Sudan only a few days when Judith, a young woman who worked in the make-shift clinic there, told the nurse-missioner of an old man named Joseph who lay dying alone in his mud hut. Off went Sister Joan with Judith to see what they could do to make the man more comfortable. Not yet knowing the local language, Sister Joan had only the language of love to communicate with Joseph as she set out each day to tend to his medical needs and feed him. He died a few weeks later and then, with the help of Judith and the parish priest, she saw to his burial.

Such caring is typical of this missioner, who once said of herself, “I love nature, country places, animals and birds, and, of course, people!” As congenial as she is, she will also doggedly fight for the rights of oppressed people and will always pick up some creepy crawly critter and put it outdoors rather than kill it.

I began working with Sister Joan in 1993, when she joined our team of Maryknoll Sisters who were returning to South Sudan after being expelled from the country the year before during Sudan’s civil war. Sister Joan had already served in South Korea for 31 years following the Korean Conflict. She nursed those most in need, from refugees fleeing North Korea to patients with Hansen’s disease.

Leaving South Korea in 1984 to assist her mother, who was recovering from a stroke, Sister Joan learned to drive so she could be with her mother in Williston Park, Long Island, each morning and then travel over an hour to work at the Maryknoll Sisters Nursing Home in Ossining by 5 p.m. When her mother died in 1993, Sister Joan was asked her future plans. “I want to go where I can nurse and work with and serve the very poor,” she said. 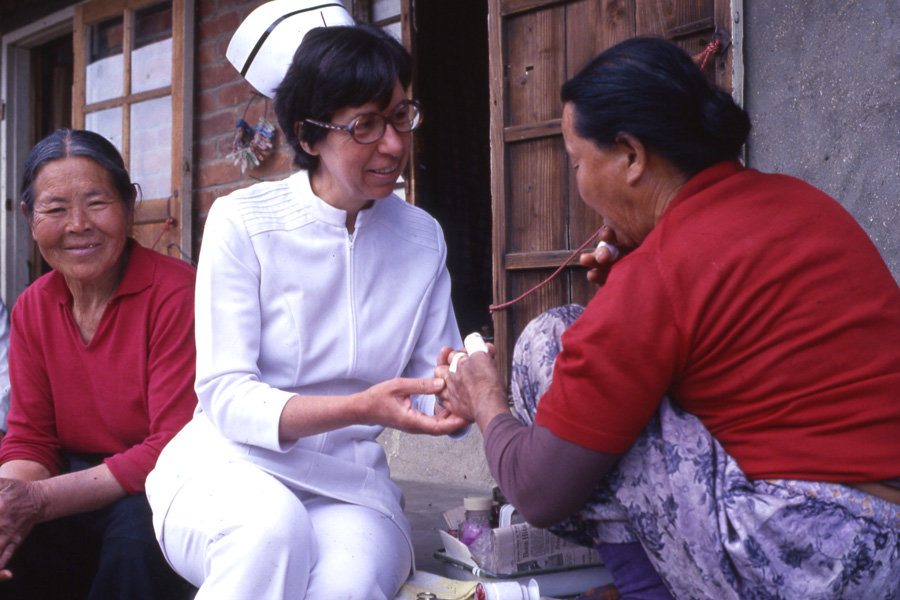 So at age 67, she set out for an entirely new mission, in war-torn South Sudan. This native New Yorker took to the African culture like a duck to water.

During the next 15 years, she worked with our Maryknoll team in three different places, first in Loa, where after only seven months among the Madi ethnic group we had to pack our Land Cruiser on a minute’s notice and evacuate before the fighting forces reached us. Bishop Paride Taban of the Torit Diocese then assigned us to Chukudum among the Didinga people, whose clinic had been bombed out in the war.

With Maryknoll Sister Marilyn Norris, also a nurse, Sister Joan set up a temporary clinic. “The room we were using had no windows,” Sister Joan recalls. “It was crowded, with us, three aides, two translators and 12 patients who lined the sides of the room. The first six months were a tremendous struggle to train personnel.” Fortunately, she says, the damaged clinic was repaired within a few months and the Sisters began treating 200 to 250 patients a day.

Bombing by planes from the Sudanese government was not unusual in our area, but in April 1999, when the fighting intensified, we were forced to evacuate again. The question uppermost in our minds was, “Where is the Lord sending us this time?” We still wanted to serve our beloved Sudanese sisters and brothers.

Our mission turned out to be in a far-off place called Nanyangachor, on the border between Ethiopia and Kenya, among the nomadic Toposa people, who had no access to medical help or education.  At the request of Bishop Taban and the St. Patrick Missionary Society of Ireland serving there, Sisters Marilyn and Joan and Maryknoll Lay Missioner Dr. Susan Nagele set up a rustic clinic in two tents and a twig hut, while I worked with several Kenyan teachers to start a grade school. 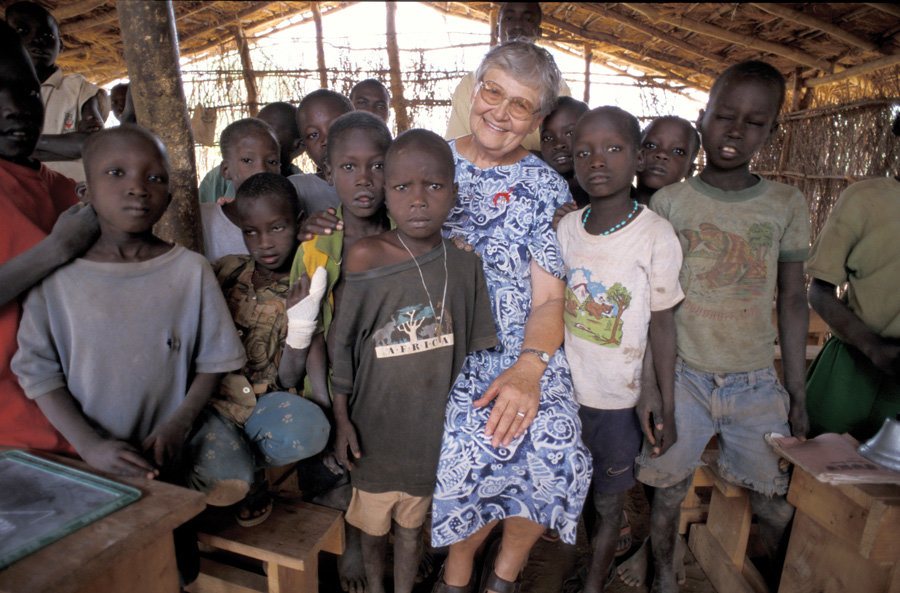 Sister Mary Ellen Manz is happy to be surrounded by students in the grade school she helped start for Toposa children in the village of Nanyangachor. (S.Sprague/S. Sudan)

Every nail, bag of cement and item for building had to be carried in from Kenya, with only a track for vehicles to get there, crossing swamps and riverbeds for about 150 miles. The trip took 12 hours on a dry day. In the rainy season it could take weeks.

Sister Joan made that journey many times during the eight years we were there, taking patients for more medical help than her isolated health center could provide. On one occasion she made the hazardous journey to the Red Cross field hospital in Kenya with a woman in labor.

“We were stuck in deep mud for two days,” the missioner says,  “and when I tried to get out of the car, my shoes were sucked right off my feet!” When they finally reached the hospital, she adds, the woman chose to give birth under a tree. “She was too afraid to lay on a bed,” says Sister Joan, explaining that beds were unknown to the Toposa people.

Over the years several injured orphans near death were brought to the clinic. Sister Joan nursed them back to health and then saw to it that they came to school. During school vacations she made the health center their home.

By the end of 2007, Kenyan Franciscan Sisters came to take over the works we had begun. It was time to move on and see what God had in store for us next.

For Sister Joan, it was bringing her healing gifts to the Maryknoll Sisters Center in New York. She can now be found at 7:30 every morning on our Home Care Unit. She isn’t nursing anymore, but as a member of the pastoral team, she reaches out to her Sisters most in need of love and friendship. She also looks after five cockatiels, two parakeets, a blue bird and two cats. In her 90th year, she admits that it’s time for more prayer and an afternoon siesta.

Featured Image: Toposa children in Nanyangachor smile as they get their picture taken for the first time.(S.Sprague/S. Sudan)

Power from the Margins

In 2000,my mum and I came to nanyangacor from loyoro about 100 miles from nanyangacor. this was just because i had kala azar and there was no nearby health centre.we managed to foot upto nanyangacor despite the fact that i was at the deadliest stage of my sickness.
the first day i was surprised to see a white lady for the first time,that was dr. susan nagele. i was brought infront of her wooden table.my blood specimen was taken and it had to be taken to kenya for laboratory. in a week’s time,the results was that i was a kalazar victim.i was treated for one and half months with susan becoming my close friend. she could give me clothes to put on because i had none.by that time i was just 10 years of age.my treatment was successful and later dr susan advised my mum to let me join the nearby school.i joined the pre unit of Good Shepherd primary school.
in school it was a new environment for me.some months later that year, sr mary ellen was our new teacher. i remember when she used to bring her piano in class and teach us how to sing do, reh,mi, fa,so,la, ti,doh in the music lesson.dr susan was responsible for my school needs.
sr joan and sr marilyn were taking care of the sick at the clinic.
during the holidays, i had a friend called marty roers and the guy likes planting trees. so we used to plant trees with him together with some of our student colleagues. marty used to give us some petty cash for our services.
2003 was not a good year for me because dr susan and marty roers had left. nobody had to pay for my school fees and no money to buy clothes and slippers.
luckily, there was a guy who used to be a nurse at the clinic and his name was lino osango. it is this guy that introduced me to sr joan because he knew sr joan can help poor and needy school children. by the time i was introduced she had a responsibility of six orphaned children and children from the poor background.she was responsible for me until 2007 when i finished my primary level. in december 2007 ,i took permission from her to go and visit my mum after 7 years of absence.i took permission because during holidays i used to help in the clinic.in january 2008 when i came back from holidays, i learnt that
Sr joan and sr mary ellen have gone to the states and they will never come back again. i was left in suspense.there was no even bye-bye and had to give them thanks esp sr joan for all the help she had bestowed unto me.i thank all the maryknoll community for the work,mercy and commitment they showed to our people during their time here in sudan. and i wish the maryknoll missionaries could come and deliver help to our people here in toposa land.
the bitter truth is that i would wish to meet face to face with Sr joan , sr mary ellen and marty roers only that i live to see their faces and hear their voices from the past memory. 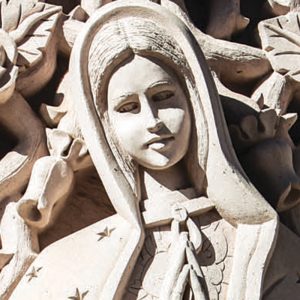 Power from the Margins