QUALITY OF MERCY
Thanks for sharing Brother Beeching’s touching story about one of his students, Malai, in his article, “We are never among strangers” (in the November/December 2016 issue). The compassion and wisdom provided by the Buddhist nun was remarkable and indelible.It’s unfortunate that when Malai became a Catholic, her (apparently pre-Vatican II) pastor told her to never again go inside a Buddhist temple because it might make others think she wasn’t a sincere Christian. Since Malai felt obligated to obey that instruction, the nun’s consoling insight was that others were thereby allowed to perform an act of compassion towards her mother. How true, and, as the nun remarked, “Is that not beautiful?”

One can easily say that it would have been more logical and merciful for the daughter to have accompanied and stayed with her mother in the temple. But as Shakespeare said, “The quality of mercy is not strained.”
Peter Murray
Brookfield, Wisconsin

WHAT’S NEXT?
Despite irrefutable proof from scientists representing 193 countries that global warming is indeed a threat to world stability, a few American naysayers maintain that all of this is “leftist thinking.” In your November/December 2016 issue of Maryknoll, one poor soul even goes so far as to attack Pope Francis for his views on not only global warming but also immigration. This same writer then decries your magazine as not taking “a more balanced approach.” What next? Will this same writer next attack Jesus for his inclusiveness? Perhaps we should all reflect on Christ’s message that “whatever you did for one of these least brothers of mine, you did for me.”
Michael Mouat
Santa Rosa, California

STORY SUGGESTION
I enjoyed the January/February 2017 issue of Maryknoll magazine. Two highlights included the story of Thomas Merton on abolishing war and the story of missionary Father Gerard Hammond, who has been able to get into North Korea to bring medical supplies for combating tuberculosis.

Perhaps a future issue could review the apostolate of Father Brendan O’Connell in Taiwan, a senior missioner like Father Hammond, who has spent his life working with the developmentally disabled.
Joseph P. Nolan
Waterbury, Connecticut

The other quote was from a Bollywood movie: “One is not diminished by seeking pardon. He who forgives has a big heart.”
Irvin T. Diemer II
Kenner, Louisiana

WILLING TO HELP
Just a note to tell you how much I have enjoyed your magazine for many years. I am 91 years old, and I still want to help with your missionary efforts.
Eileen Strickland
Seattle, Washington

DEAR PATRONESS
Thank you for your wonderful article and photos about “Mayan Catholicism in Los Angeles” in your November/December 2016 issue.

I fell in love with the lives of the saints early on, growing up in my “solid Catholic” family—lucky me! And I’ve loved your magazine ever since my fifth-grade teacher, Sister Roberta Maria, brought several copies of The Field Afar into our classroom about 1943–1944.

So I am so happy to read such good news of the Mayan community in Los Angeles, but was so puzzled and disappointed when I came to the end on page 53, because nothing was written about Santa Eulalia herself and why she is their dear patroness and namesake, especially as she is now a part of our American Catholic life, as this community is.
I hope you are already planning such a follow-up article, as I am sure there are many other readers who would like to know about her.
Dorothy A. Bruck
Portland, Oregon

JUST WAR SOPHISTRY
I found myself agreeing with all six bullet points (please pardon the expression) in the article “Recommitting to Gospel Nonviolence,” except for the first half of the fifth one. St. Augustine’s “just war theory” is excellent, and definitely still should be taught. The problem isn’t with the theory; it is instead with the sophistries our country and others use, bending its criteria well past the breaking point attempting to justify wasting lives and money fighting wars that clearly flunk.

Working for peace in the ways the article recommends are all good, but we have to recognize that not everyone in the world desires peace, and so be prepared for the possibility that the peace process may break down or never get off the ground in the first place. We need our modern St. Francis of Assisi-type people to speak first, but unfortunately sometimes we’re still going to need a Don John of Austria or a Winston Churchill, along with sufficient weaponry to defend ourselves.
Mary Hickey
Kirkersville, Ohio 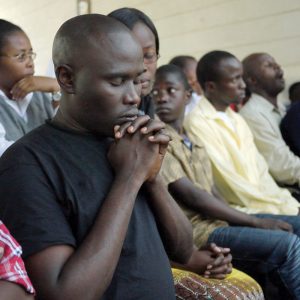 Missioner Tales, January & February, 2017 Part of the reality of being in mission in Mwanza, Tanzania, is the need...