Nonviolence as a style of politics

Every day, we hear about war, terrorism and social violence, issues that affect us and our brothers and sisters around the world. The problems can seem so complex that they leave us wondering, “What can I possibly do?”

In his message for the 50th World Day of Peace, celebrated on January 1, Pope Francis gives direction. He urges us to overcome inertia by replacing cautiousness with courage and cynicism with hope and asks us as Catholics to focus this year on Christian nonviolence as a style of politics for peace.

“To be true followers of Jesus today includes embracing his teaching about nonviolence,” Pope Francis says in his message, appropriately entitled “Nonviolence: A Style of Politics for Peace.” He tells us, “The eight Beatitudes provide a portrait of the person we could describe as blessed, good and authentic” and adds, “This is also a program and a challenge for political and religious leaders, the heads of international institutions, and business and media executives: to apply the Beatitudes in the exercise of their respective responsibilities.”

Pope Francis reminds us that “Jesus himself lived in violent times” and “marked out the path of nonviolence” when he taught his disciples to love their enemies and to turn the other cheek.

In his message, the Holy Father highlights great peacemakers, including Mahatma Gandhi and Khan Abdul Ghaffar Khan in India, Dr. Martin Luther King Jr. in the United States, Leymah Gbowee in Liberia, as well as Saints Francis of Assisi, Mother Teresa of Calcutta and Thérèse of Lisieux to illustrate that nonviolence is more powerful than violence.

Pope Francis pledges “the assistance of the Church in every effort to build peace through active and creative nonviolence.” One way he plans to fulfill this pledge is through the work of the new Dicastery for Promoting Integral Human Development, which opened at the Vatican on Jan. 1. This new office, says the pope, is designed to help the Church promote in a more effective way “the inestimable goods of justice, peace and the care of creation and concern for migrants, those in need, the sick, the excluded and marginalized, the imprisoned and the unemployed, as well as victims of armed conflict, natural disasters, and all forms of slavery and torture.”

Featured image:Giving the peace sign, a boy returns to his village near Mosul, Iraq, after it was liberated from Islamic State militants last fall.
(CNS/Thaier Al-Sudaini, Reuters)

Flags for Peace and Justice

Dear Susan–
I enjoyed reading your article on Nonviolence. Can I share your article with the Knights and Ladies of the Holy Sepulchre for their Lenten reading this week? I try to send them an article for their spiritual reflection each week during Lent.

Please let me know if I have your permission. It will go out by e-mail.

Thanks and God bless. Msgr. Lopez. Vicar General of the Diocese of San Bernardino in California.

Monsignor Lopez,
Thank you for your kind message. Yes, you have my permission to share the article from Maryknoll Magazine. Feel free to let people know that they may contact me at sgunn@maryknoll.org if they have would like any more information. Peace and blessings on you and your ministry. 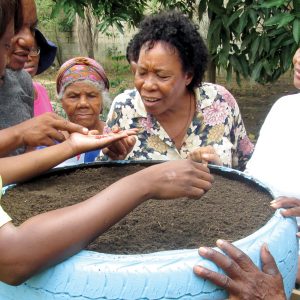 Seeds of peace planted in a dangerous slum bring forth an oasis || In the midst of Cité Soleil—the worst slum in Haiti—gardens...

Mar 1, 2017
Copyright 2020 Maryknoll Fathers and Brothers. All Right Reserved.
Back to top