" /> One child at a time | Maryknoll Magazine

Little Sister of St. Francis becomes a mother to street boys in Kenya and a Maryknoll partner in mission

Sister Catherine Wanza Mui, a Little Sister of St. Francis, says she always loved serving those most in need in her native Kenya. After professing her first vows in 1994, she worked at a home for babies, coordinated programs for destitute children with disabilities and initiated parish programs to empower women and assist orphaned children. Now the Maryknoll Society is proud to call her our partner in mission as she continues a work dear to our heart.

In January 2009, Sister Catherine was sent to Nairobi to oversee the Ukweli Home of Hope, a program initiated by the late Maryknoll Brother Peter Agnone in 1995 in response to the increasing number of “street boys” living on the highways and byways of Kenya’s capital.

Sister Catherine says in Kenya an estimated 250,000 to 300,000 children live on the streets, with 60,000 in Nairobi alone. The majority of these children are male, urban migrants between the ages of 6 and 15, most with very little education and no source of income and coming from single-parent families. To survive, these children scavenge for food, sell scraps, beg, steal and work at menial jobs when available.

But Ukweli Home of Hope has given new life to many of these children. “We have managed to rehabilitate, formally educate and reunite 169 boys with their families,” Sister Catherine proudly reports. “Currently we are supporting 93 boys for their education in various local schools.” The rehabilitation process, she adds, consists in fostering behavioral changes and weaning the boys away from drugs and glue-sniffing through individualized mentoring and counseling.

The all-important goal for Sister Catherine’s team is to provide a family-like atmosphere for these boys. “Despite the negative society attitudes towards them, boys at the center perform very well in education and in the formation of good character, sometimes better than some of the children from well-established families,” says Sister Catherine.

Ukweli’s ultimate goal, she explains, is to reunite the boys with their birth families, either while the boys are studying in schools or as soon as possible afterwards.
Ukweli Home of Hope is temporarily situated on the compound of the Little Sisters of St. Francis in Nairobi. However, generous benefactors have purchased a large plot of land nearby, where construction has already begun on a permanent rehabilitation center that will accommodate more boys than the current center can hold and provide sufficient space for a very large garden. A small drinking-water bottling plant has been constructed there, and the water sold will help ensure at least partial self-sufficiency for the home. Other income-generating projects to assist in sustaining the new center will include a poultry market, fishery and piggery.

Sister Catherine appreciates the assistance Ukweli has received from the Maryknoll Society. “I have really enjoyed working with the Maryknoll Fathers and Brothers, who are committed to and supportive of our project,” she says. “Their value of quality education for these boys has also been my desire as a woman religious in service to humanity.”

A significant guiding principle for 12-step recovery groups such as Alcoholics Anonymous and drug rehabilitation programs is to live “one day at a time.” In her ministry to street children, Sister Catherine proclaims God’s love by promoting recovery “one child and one family at a time.”

Featured image: Sister Catherine Wanza Mui is happily surrounded by boys she is helping to find a brighter future at Ukweli Home of Hope in Nairobi, Kenya.
(C. Wanza Mui/Kenya)

Robert Jalbert, M.M.
Father Robert A. Jalbert served four years in the U.S. Air Force as a Russian linguist in Italy and Turkey before earning a B.A. in English Literature from Holy Apostles Seminary College in Cromwell, Connecticut. He entered the Maryknoll novitiate in Hingham, Massachusetts in 1973, and after training in Tanzania earned his M.Div. in Theology from Maryknoll School of Theology, New York, where he was ordained in 1979.

Love this story – she is so innovative!!!! 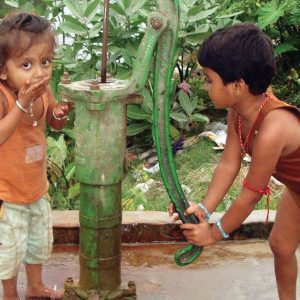 || QUALITY OF MERCY Thanks for sharing Brother Beeching’s touching story about one of his students, Malai,...