Pentecost, arguably the most significant event in the Christian calendar, seems, paradoxically, almost overlooked. No cards. No trees. No colored eggs. But it overflows with more gifts than Christmas and burns with divine fire rather than electric lights!

After Jesus’ death on the cross, his apostles were ashamed, frightened and disheartened. Following his resurrection and subsequent appearances, they were overjoyed and still incredulous. But after his ascension, they felt orphaned a second time. So no matter what they believed—or what they saw—they lacked the conviction and courage to act on their beliefs.

Fifty days after Passover the apostles, being faithful Jews, were gathered in Jerusalem for the feast of Weeks. This feast commemorates the giving of the Law to Moses on Mount Sinai during the Israelites’ exodus from Egypt.

The apostles knew the Law. They knew the prophecies, especially those that referred to Jesus. They firmly believed he had risen from the dead. But knowing and believing is one thing; living and doing are very different.

And so, they gathered in faith—and in fear. But this time something wonderful happened. Luke tells us in the Acts of the Apostles (2:1–13) that the house in which the disciples were meeting began to shake as if by a mighty wind. Tongues of fire came to rest over each of them. Filled with nothing less than the very Spirit of God, they burst out into the crowded streets of Jerusalem and began to preach a very radical—and dangerous—message: Jesus, the Crucified, is the Messiah, and is risen from the dead.

Luke describes how suddenly the apostles began speaking in different languages, so that people from all over the world could understand them. You might say this was a two-part miracle: the apostles speaking and the people understanding.

Had it not been for Pentecost, we might never have heard of Jesus, his teaching, his salvific death and his glorious resurrection. The Holy Spirit empowered the timid apostles to proclaim the message publicly and boldly, despite the risks. And here’s the even greater mystery: Pentecost continues today!

We commemorate Christmas; we celebrate Easter; but we participate in Pentecost.

God continues to pour that same spirit on people of faith and good will. Surely the same Holy Spirit that transformed Archbishop Oscar Romero into a champion of the oppressed also empowered Malala Yousafzai to bravely call for the education of Muslim girls, even as her courage exposed the cowardice of her would-be assassins. And the Dalai Lama reacts to repeated threats and insults with humor, wisdom and prayers for peace.

We have been blessed with countless witnesses to the Reign of God in our lifetime: Mother Teresa, Rosa Parks, Dorothy Day and Julius Nyerere, who lived as champions of the poor; and Sister Dorothy Stang and Father Stanley Rother, who died defending the poor in Brazil and Guatemala, respectively. Yet these are only the more famous witnesses. Our faith communities are teeming with Spirit-filled people who speak truth to power.

The point of Pentecost is that God continues to pour out the Holy Spirit on people, no less today than 2,000 years ago. We know the commandments. The Lord told us to love our enemies and to treat all people as our brothers and sisters. We know what God requires of us, but on our own, we lack the courage to act on our beliefs.

The good news: Jesus did not leave us alone. He sent the Holy Spirit to empower us to actually live the Gospel in our time. The Reign of God is at hand!

Checking in on 'NONES’ 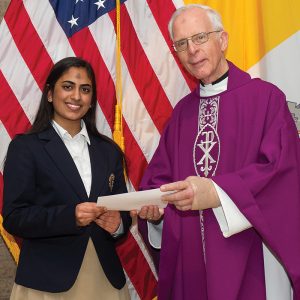 Referencing Pope Francis’ encyclical Laudato Si’ in which he calls on all people to respect the earth and stop exploiting...