Maryknoll Father John Felago relates that when he was working as a missionary in Egypt, the Maryknoll Fathers and Brothers in Cairo had a local Muslim woman prepare their meals. Her name was Nigets. She prepared food for two days’ eating. One day Nigets called Father Felago to come into the kitchen to taste the food she was preparing. She had never done that before, since she always tasted the food as she cooked. So Father Felago asked why she was inviting him for a taste today. Nigets answered that every year for nine days before the feast day of the Assumption of the Blessed Virgin Mary she fasts in celebration of Mary. Many Christians do not know that the Blessed Virgin is mentioned in the Quran and is venerated by Muslims.
Roberto Rodriguez, M.M.

Seven of us North Americans were visiting several homes in the small village of Arcatao in north-central El Salvador, very near the Honduran border. One of our hostesses, Evangelina, was a petite elderly woman with silver hair tied neatly back. I remember that she had an unusually beautiful and smooth complexion.
Evangelina had prepared a local favorite dish just for us, although I cannot remember its name. We had been warned about eating anything that was not pre-packaged or that we didn’t know how it was prepared.
But here we were, visitors, being shown incredible hospitality. How could we refuse? This poor woman, whose simple house was little more than a shack, had taken the time and expense to prepare a treat for us. It was a sweet-tasting concoction, likely made with rice and milk. I got an extra big portion and was not sure I was going to be able to eat it all. But I did. It was delicious.
Evangelina made us all feel very special. She not only showed us a great example of hospitality, but also how to make others feel more important than ourselves, which is a good definition of humility.
Deacon Larry Hart

As I was walking through the neighborhood of Mabatini in the city of Mwanza, Tanzania, where I serve as a Maryknoll lay missioner, I noticed a young woman bent low to the ground. Intrigued as to what she was doing, I slowed down and walked closer to get a better look. She was looking at a text message on her phone and copying a phone number in the message by writing it in the dirt.
In the United States, we might simply pull a piece of paper and pen out of our purse or pocket in order to do the same thing. I reflected on how that small difference, using dirt versus a pen and paper, highlights the economic difference between us.
I also was reminded of Jesus and how he wrote in the dirt to convey a message. I thought of how similar the Tanzanians are to Jesus in their resourcefulness!
Ashley Leen, MKLM

Shortly after returning to the United States from Hong Kong, I was assigned to work in Chinatown in Chicago. Having served in mission in Hong Kong for years, I had learned to speak Cantonese Chinese, so I was asked to help new Chinese immigrants with translations for everything from finding a job, getting housing, choosing schools and buying groceries, to mention just a few of the opportunities I had to use my language skill.
One day, after I had taken a group of Chinese women and children to the hospital and helped to translate the medical terminology from English to Chinese and vice versa, one of the women I was helping commented on my service. “Ngaai Sau Neui (Sister MaryLou), you are like a blind person’s walking stick,” she said. “You lead us to places we do not know; we see signs but we cannot read them; we hear a spoken language but cannot understand it; and you help us walk, talk, see and hear.”
MaryLou A. Rajdl, M.M. 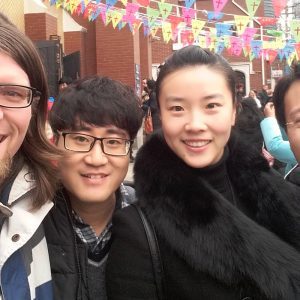 Young Maryknoll priest’s world expands during his time in China || Mission is an adventure with God into a new world....