A Rumor of Angels

One of my early childhood memories is waking up at night and looking from my bed into our kitchen. There I clearly saw golden beings of light, wearing translucent robes and helmets. Their faces were stern but kind. They filled the room and stretched from floor to ceiling. They did not so much walk or float as glide. And they could pass through one another! After watching mouth agape for a while, I did what any 6-year-old would do. I screamed.

My mother came running. I described what I had seen and she reassured me, “Those were angels.” I asked about them but was unconvinced by her description. What I saw had no wings or haloes, played no harps and sang no hosannas.

I guess I was dreaming, but that experience opened me up to the possibility of angels. Growing up in the 1960s, I found people too preoccupied with social unrest in this world to think about other worlds. The Peace Corps sent me to Korea, on the brink of political upheaval and great economic development. I went to visit Maryknoll Father Ben Zweber on Deok Cheok Island in the Yellow Sea, four hours by boat off the coast of Incheon.

It was lunar new year, and the fishermen had festooned the masts of their ships with red, blue, yellow, white and green flags. At the top of each mast were bamboo branches. Father Ben explained the colors were from shamanism, a belief system predating all religions. In shamanism, nothing is worse than dying at sea, where one’s soul can never be at peace. The bamboo was supposed to connect earth, sea and sky to protect the fishermen and save their souls.

A few days later a terrible storm arose and one of the ships sank, miles from home, drowning all five men aboard. The village shaman went to where the ship was believed to have sunk and, again using bamboo, attempted to “catch” the lost souls to bring them home. But something unexpected happened. One week later, the bodies of the only two Catholics aboard washed ashore—right in front of their homes. They received a proper burial; their souls could rest. Shortly thereafter the entire village converted to Catholicism.

There were other such experiences and “coincidences” during my 12-year stay in Korea, and even highly educated people expressed a reverence for the spirit world. Thanks to the Charismatic Renewal, I felt comfortable speaking with people about spirits and angels. When I returned to the States, I found a curious transformation had taken place. Opinion surveys found more Americans believed in angels than in God!

The word “angel” means messenger. Angels play important roles not only in Christianity, Judaism and Islam, but also in Baha’i, Zoroastrianism and Sikhism.

In the Catholic Church we celebrate the feasts of the archangels Michael, Gabriel and Raphael on September 29 and Guardian Angels on October 2. Scripture scholars tell us angels in the Bible serve as a buffer between God and us. In the book of Genesis (18:1–15) Abraham and Sarah offer hospitality to three visitors, who go from speaking for God, to God speaking directly through them. The Orthodox Church captures this encounter in their sublime icon of the Holy Trinity as three angelic visitors! At Mass, we enter into the most sacred moment repeating the words of Isaiah 6:3 and his angelic vision in the Temple: “Holy, holy, holy, Lord God of hosts, heaven and earth are full of your glory.” The most popular prayer of Catholics, the Hail Mary, begins with the greeting of the archangel Gabriel in Luke 1:28, “Hail, full of grace, the Lord is with you!”

Angels offer common ground when we share our faith experiences with people of other religions, as well as with people who find them less intimidating than a deity. Angels offer a corrective to an over-intellectualized understanding of faith. They stretch the limits of human imagination and on one occasion, they filled a child’s kitchen—and memories— with a vision of celestial beings.

Maryknoll brother candidate learns to be a missioner in Bolivia 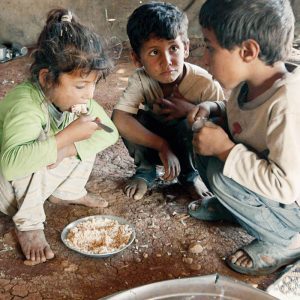 The U.N.’s Zero Hunger Challenge seeks to vanish hunger from the planet || "Change the future of migration. Invest...

Sep 1, 2017
Copyright 2020 Maryknoll Fathers and Brothers. All Right Reserved.
Back to top