Six months after Leen Ali-Dib and her refugee family resettled in Pelham outside of New York City, they went to a local park to enjoy the July 4 fireworks. What should have been an evening of pyrotechnical entertainment turned into a nightmarish flashback to their hometown of Damascus, Syria.

“We were sitting on the grass, and when the bombs started to go up, we were all afraid because the sound was so strong and that sound reminded us of the bombs in Syria,” explains 13-year-old Leen, who acts as impromptu interpreter for her parents and three siblings.

It wasn’t the first time her family members have been startled by sounds reminding them of the six-year-old civil war in their homeland. “Sometimes when we walk down the street near the train station and hear the train sound, my mother imagines it is the plane and the bomb, but after a while she realizes, ‘I’m in America, not Syria,’ ” Leen says. 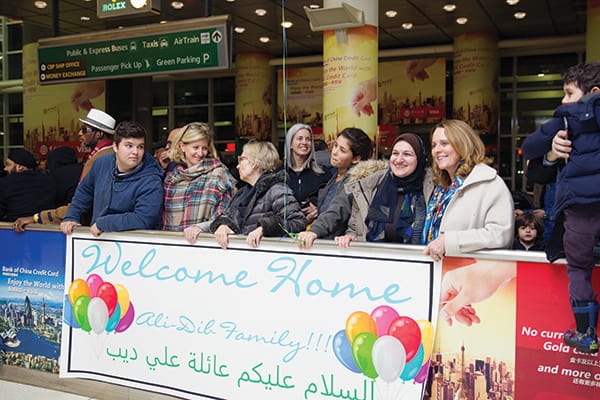 Members of Hearts and Homes for Refugees from Pelham, N.Y. wait to greet a Syrian refugee family that arrived in the United States in January. (D. Comfort/U.S.)

The family of Suzan and Bahaa Ali-Dib fled Damascus early in the conflict after a bomb fell on the house next door, knocking their home askew, shattering windows and trapping them and their children inside as out-of-kilter doors jammed. Previously, Bahaa had been imprisoned and tortured for refusing to help the Syrian regime, he says.

Their five-year odyssey from Damascus, where Bahaa was a spice merchant, took them to Lebanon, Egypt, Turkey and finally Westchester County, N.Y. The family with four children ages 2 to 13 was resettled there last January through the efforts of a local community group in Pelham and with the help of personal donations from some Maryknoll priests and brothers.

Maryknoll Father Francis Breen says individual members of the Maryknoll Fathers and Brothers became involved with refugee resettlement following Pope Francis’ call in 2015 for Catholics to respond to the plight of refugees streaming out of the Middle East and northern Africa. In April 2016, Father Breen and some other Maryknoll priests and sisters attended a forum in White Plains on the Syrian refugee crisis.

“This was shortly after we saw those horrific images, especially of a boy lying dead there on the beach in Greece who had crossed the Mediterranean,” Father Breen says.

Afterward, priests and brothers living in the Maryknoll center in Ossining, N.Y., held a house meeting to discuss how to respond. The missioners, many of them elderly, did not feel they could host a refugee family, but they did what they have asked others to do so often to support mission work. They dug into their own pockets and drew on personal and family resources to help their Westchester neighbors welcome those fleeing war and violence. 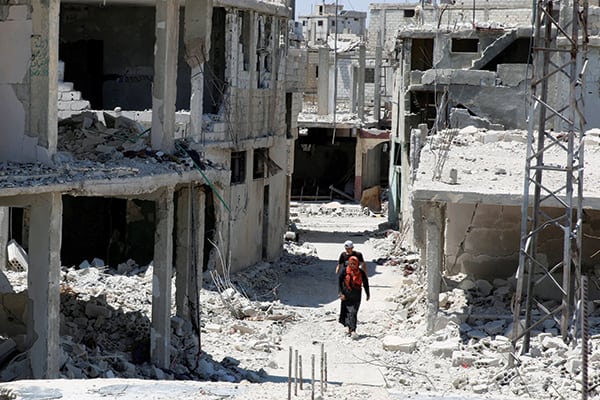 A woman and a man walk by the rubble of a bombed-out section of Deraa, Syria. (CNS/Alaa al Faqir, Reuters)

“These were individual donations from Maryknoll priests and brothers,” Father Breen says, noting that none of the funds came from the Maryknoll Fathers and Brothers as an organization.

Initially, the priests and brothers donated $16,000 to resettle refugees in nearby Stamford, Conn., another Syrian family whose 17-year-old daughter was paralyzed from the waist down after she was shot when she was 12 years old.

Then, last December, the Maryknollers donated $10,000 to the newly established Hearts and Homes for Refugees, a Pelham-based group that was the first in Westchester to open its doors to a Syrian family: the Ali-Dibs.

“We were very grateful for the support and it was especially good because it came early on and gave us the ability to carry on knowing we could support the family,” says Kathie O’Callaghan, founder and president of Hearts and Homes for Refugees. The group was the first local resettlement agency formed in Westchester and, working with Catholic Charities of the New York Archdiocese, agreed to resettle a family. “It was something we could do locally,” she says.

While it usually takes three to six months of preparation for a family, the Pelham group had only three weeks’ notice that the Ali-Dibs were coming. Thus, O’Callaghan says, the timeliness of the donation from the Maryknollers was crucial.

Kelly Agnew-Barajas, director of refugee resettlement for Catholic Charities Community Services of the New York Archdiocese, says the interfaith and civic groups it works with in Westchester have sprung up in response to the refugee crisis of the last couple of years.

Catholic Charities was able to resettle about 15 people in the past year in Westchester before most resettlements were put on hold during the 120-day U.S. ban on refugees from Iran, Libya, Syria, Somalia, Sudan and Yemen, Agnew-Barajas says. In the meantime, she and O’Callaghan say, groups in another dozen communities are preparing to resettle refugees after the ban.

The United States admitted about 80,000 refugees from around the world in 2016, up from 75,000 the year before, but that number could be reduced next year to 50,000, which is what President Donald Trump has said he would permit, Agnew-Barajas says. Despite the current political debate about refugees, the program has traditionally had bipartisan support, she says.

“It was always considered for what it was: a humanitarian program helping people who had been persecuted and needed to be rescued,” she says. “Refugees are really an asset to the community. They really want to come and work and give back. They’re very grateful for the opportunity of what the United States has given them.”

A 2016 Pew Research Center analysis of the world refugee crisis noted, however, that U.S. public opinion over the years has “consistently opposed admitting large numbers of foreigners fleeing war and oppression, regardless of official government policy.”

The U.N. Refugee Agency reports there are 22.5 million refugees worldwide. More than 4.5 million of these are from Syria.

Father Breen, who, like many other Maryknollers, has seen firsthand the plight of people in refugee camps during his years as a missioner in Africa, emphasizes that refugees are vetted rigorously before getting approval to enter the United States.

“The group we have least to fear is refugees,” he says.

Meanwhile, Father Breen says that funds from individual Maryknoll priests and brothers were also used to help settle a family of five people from the Democratic Republic of the Congo, which is not on the ban, in Poughkeepsie, N.Y., just north of Westchester County. He has made commitments to help five or six other communities in the county, including Ossining, where Maryknoll is located.

While the amount of the donations from his fellow Maryknollers surpassed his expectations, Father Breen wasn’t surprised at their generosity.

Featured Image: The Ali-Dib family arrived as refugees from Syria after they fled bombing that damaged their home. From left are Leen, 13, Limar, 6, mother Suzan holding Basm, 2, son Tarek, 12, in back, and father Bahaa.
(L. Monahan/U.S.) 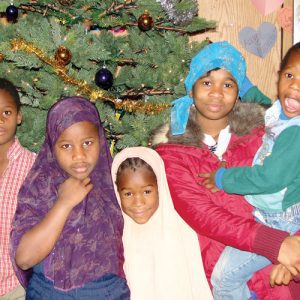 A former refugee from Somalia living in Vermont strives to give back to the country that welcomed her family. || Madina...