From The Editor / May 1, 2018
ShareTweet it!LinkedinEmailPrint

Reading the winning essays in this year’s Maryknoll Student Essay Contest fills me with optimism. Students were asked to write on Pope Francis’ call “to take a clear stand for creative and active nonviolence.”

The depth of their feelings and the diversity of the award winners bodes well for the future. Of the six prizes that we awarded, half went to students who are not Catholic. One is Jewish, another Muslim and a third is a member of the Bruderhof Christian community.

We didn’t plan this diversity in winners, but it seems fitting. So much violence has its origins in exclusivity. Wars, terrorism and mass killings are often motivated by self-righteous hatred of the other, of anyone who is different from the aggressors. These students clearly understand this and express it eloquently. I invite you to read their words of wisdom. We publish the first-place essays in the print edition of this issue of Maryknoll magazine, and all six essays are online at maryknollsociety.org/winners.

As eighth-grader and a first-place winner Riva Maendel wrote, “Even though our efforts might seem small … every little block of peace will help build the foundation for future generations.” 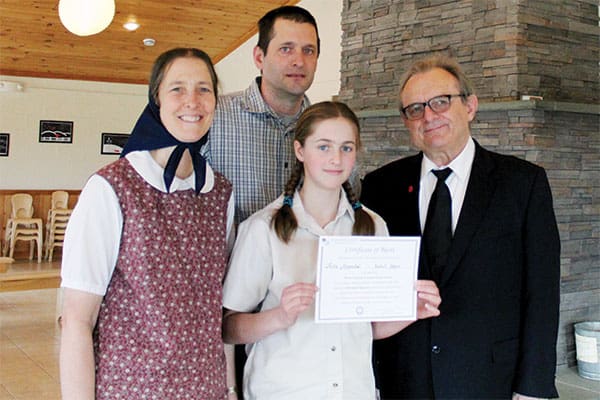 As Susan and Jeremy Maendel proudly look on, their daughter Riva Maendel, an eighth-grader at the Bruderhof community’s Fox Hill School in Walden, N.Y., accepts her first-place $1,000 award from Maryknoll Brother John Blazo (right). (A. Marsolek/U.S.)

On Wotje island in the Marshall Islands, we Maryknoll sisters were planning to head back to the main atoll of Majuro, but the plane...