My name is Richard Robert Odokonyero. I am a Ugandan member of the Acholi tribe. I am also proud to say I am a partner with the Maryknoll Society in God’s mission of mercy.

I drive Maryknoll Father John Barth to visit the refugees in the Palabek Refugee Settlement in Lamwo in northern Uganda. It is 79 kilometers (49 miles) from Kitgum District, where I live. It is necessary here for foreigners to have a driver who knows the area. The roads are very bad and hard to travel alone. When Father John arrived in Kitgum in 2017, a parish priest, Father Anthony, asked me if I would drive Father John to the camp that is hosting people who fled civil war in South Sudan.

I am not new to this kind of situation. In 2002, when I was 12 years old, our people in northern Uganda were internally displaced during civil war. We became refugees in our own country. So I feel the pain of losing everything to go to a foreign place. Also the people Father John visits are mostly from the Acholi tribe, so we share a similar language and culture, which makes communication easy.

Father John and I started visiting the camp mostly on Sundays for prayers with the refugees. I got to meet some of the other priests who work there, like Father Lazur Arasu from India. I was impressed by the priests’ kindness to the people and by the people’s faith. They would pray and sing with joy even when the sun was beating down on them. Father John has put up two buildings where the people can pray now. 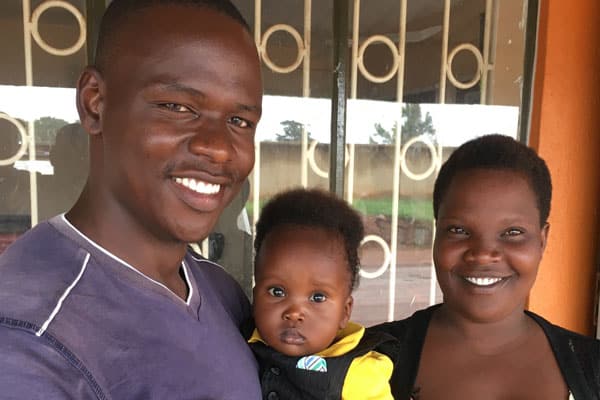 Richard Odokonyero, a driver Maryknoll Father John Barth, is a Ugandan partner in mission with Maryknoll. Here he poses with his wife and son. (Courtesy of J. Barth/Uganda)

Other changes have taken place this year. Maryknoll sent Father John a Toyota Land Cruiser that can go through the muddy roads. Now we don’t get stuck as much as we used to.

We also go to the camp on weekdays with two medical doctors from the Kitgum government hospital and look for people with eye problems. After the doctors make the diagnosis, those with correctable vision problems such as cataracts are given a date for surgery at Gulu Referral Hospital, the only hospital with a good eye clinic and experienced eye specialists in northern Uganda. It is a three-hour drive from Lamwo. I help drive the patients there. We normally take five patients and five caretakers at a time.

So far, many have gained back their eyesight. One of them is 70-year-old Acuru Galdino, who was blind because of cataracts in both eyes. He was supposed to be taking care of his 5-year-old grandson, Simon, whose parents were killed in the war in South Sudan. But Mr. Galdino couldn’t do anything without Simon, who led him around with a broom handle.

By the grace of God, I can testify that since his eye operation, Mr. Galdino can see! He is so happy, and his grandson is now able to attend the simple school in the camp.

Stories like this have been made possible through cooperation with the Lutheran World Federation that helps Father John with the necessary paperwork, such as getting travel permits for the refugees to go to Gulu. Sometimes the federation lends Father John a vehicle to accommodate all the patients we can’t fit in ours.

Father John tells me I am a vital part of his team. I feel blessed. Doing this work has increased my faith and love for God’s work, and I thank the Maryknoll Society and Father John for giving me this opportunity.

A U.N. framework for migration 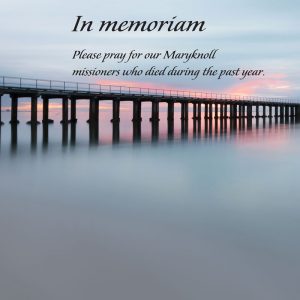 Please pray for our Maryknoll missioners who died during the past year. Sister Elizabeth Burns Father Bernard P. Byrne Father...

Nov 1, 2018
Copyright 2020 Maryknoll Fathers and Brothers. All Right Reserved.
Back to top