When Pope Francis goes to Panama to celebrate the 34th World Youth Day in January, thousands of young Catholics will be there to praise God with him. This year, the international gathering takes place as the Church is making major efforts to engage young people and listen to their needs.

“WYD nurtures the faith through an encounter with Jesus in the testimonies, catecheses and particularly the unity of young people who share the same love for God,” says Sofía Cruz, a young adult in charge of the Archdiocese of San Salvador’s delegation going to World Youth Day.

But she says, youth need to be heard, accompanied and to feel they belong in the Church. “The Church responds to those needs by providing spaces where young people can be protagonists,” she adds, offering opportunities to engage in “mutual listening.” 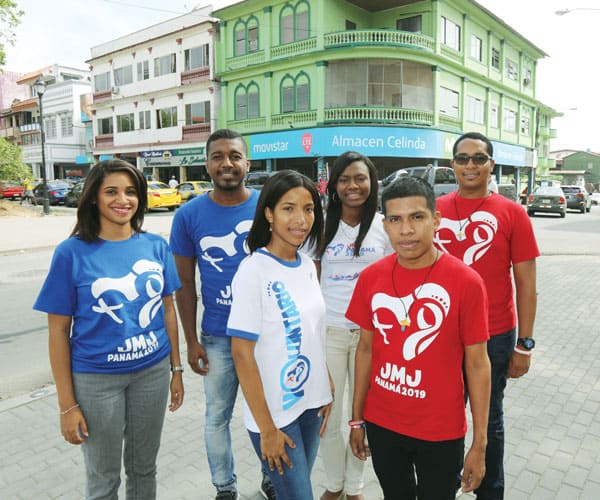 Making youth and young adults a priority, Catholic ministry leaders have been focusing on ways to better accompany young people—many of whom can feel disenfranchised from organized religion. While World Youth Day—initiated by St. John Paul II in 1985—may be the most visible and exciting of the Church’s outreach to youth, other recent efforts include international and national processes like the Synod of Bishops focused on young people, the V Encuentro of Hispanic/Latino Pastoral Ministry and the National Dialogue initiative in the United States.

These efforts are important for “how we work with young people and how we mobilize young apostles for the present and the future of the Church,” says Kevin Ahern, an assistant professor of religious studies at Manhattan College in New York City.

Ahern says focusing on young people and treating them as peers is countercultural because society telegraphs the idea that youth are not yet ready to handle challenges or leadership opportunities. The culture “wants them to be consumers rather than participants,” he says. “We have a lot of resources in our (Catholic) tradition to challenge that.”

During last October’s Synod of Bishops in Rome, participants spent a month reflecting on the theme “young people, the faith and vocational discernment.” Synod voting members were called to recognize the challenges young people face and renew the Church’s ministry to them. Some of the issues discussed included poverty, violence, hunger, exploitation and trafficking, unemployment, vulnerable youth, the treatment of women, human rights, migration and the refugee crisis. 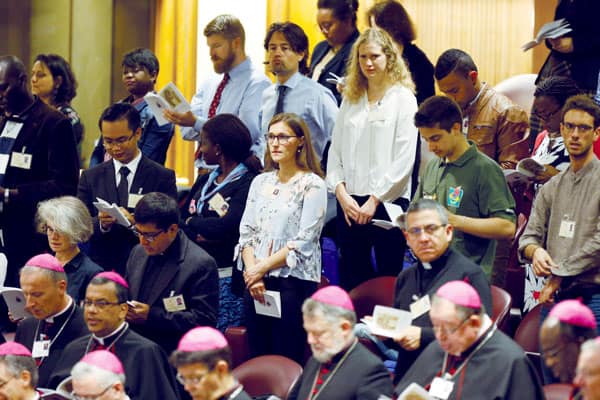 Bishops and observers pray at the Synod of Bishops in October. (CNS/P. Haring/Rome)

To prepare for the synod, the Vatican sent questions to dioceses around the world and launched an online questionnaire for young people ages 16 to 29. Additionally, 300 young adults participated in a pre-synod meeting—while thousands of young people followed the pre-synod on Facebook—so their input was included in the synod’s working document.

“The potential to have an impact is huge,” says Anna Johnson, Maryknoll’s young adult outreach coordinator. Based in Seattle, Johnson was one of 15,000 young people collaborating on the content of the preparatory document through social media.

Cherylanne Menezes, from India, one of 34 young people who attended the synod as auditors or observers, said in a video the month-long synod was a time of “joy and communion” marked by mutual openness. Themes that resonated included the need for dialogue, authenticity, and spiritual mentors who are joyful witnesses of Christ. Young auditors stressed that by listening to them, the Church can benefit from their gifts while they can see the Church as teacher. Auditor Daniel Bashir, from Pakistan, said this synod was “not about the Church talking about you, but talking with you.”

The groups also discussed what needed to be emphasized in the synod’s final document. For example, Cardinal Wilfrid Napier of Durban, South Africa, called for the inclusion of non-Western perspectives. He added that while young people in the West are becoming disaffiliated from the Church, in Africa “young people are looking for Jesus and looking for answers to their problems.”

In the United States, the V Encuentro (or Fifth Encounter) also had young people at the forefront of the multi-year process, with nearly one-third of its participants being emergent leaders ages 18–39. Data shows more than 50 percent of U.S. Catholics under 30 are Hispanic.

Ana Sierra and Secilia Blanco, two young delegates at the V Encuentro, said one of the ways they engage youth in the Diocese of Baton Rouge, La., is to ask them to volunteer. “If you invite them to help (others), they are always willing to get involved,” says Sierra, who was born in Mexico.

Blanco, a daughter of Salvadoran parents who knows the importance of faith and culture, adds that support, formation and spiritual mentorship are needed to consistently engage young people who want to go beyond “warming the pews” during Mass. (To read about the V Encuentro, go to V Encuentro Empowers Young Hispanic Catholics)

Father Alejandro López-Cardinale, president of La Red–National Catholic Network de Pastoral Juvenil Hispana, says throughout the Encuentro process and preparation for the synod, young people have been consistent in outlining their needs. This includes asking for more moral transparency and consistency so people can be real witnesses who lead in a cohesive way; a call back to the fundamentals of the Catholic faith; theological formation for laypeople; and more access to education.

“One of the most important things they ask is for the Church to be a place where they can find the space to be encountered by Jesus,” Father López-Cardinale says, adding that young people are attracted to a Church that does not preach itself, but Jesus. “Sometimes the accent is on how you should believe the content of the faith, instead of (emphasizing an) opportunity to have the experience to be loved and to be understood as you are and (then) move forward to deeper understanding of the Catholic faith.”

Elinor Rodriguez says her involvement with Christian Life Communities at her university—which started with an invitation from a peer—eventually led to an “all-encompassing transformation of heart” that led her to be involved in other ministries and even changed her career path from psychology to pastoral care.

“Young people want a sense of community and belonging,” she says. “We all have a place in the body of Christ, to come as we are, equals in God’s eyes. Extend invitations to young people to come participate, welcome them to find a community in God and each other.”

Considering youth and young adults as agents of ministry is very important for the future of the Church, says Christina Lamas, executive director of the National Federation for Catholic Youth Ministry (NFCYM).

NFCYM and La Red are part of the core organizations involved in yet another pastoral opportunity to listen, accompany and understand how to serve youth and young adults in the United States. Called the “National Dialogue,” this three-phase effort seeks to offer a space for conversation between Church leaders and young people. In addition to core organizations and the U.S. bishops office, the National Dialogue has unified nearly 100 youth-oriented organizations that will facilitate dialogue through guides and questions for young people at different stages of their faith. This platform was also planned to help ministers, parents and young people to process and implement the recommendations from the synod and V Encuentro.

“Now is the time that the Church is critically focused on listening to young people,” Lamas says. Through dialogue and discernment, “we would learn how to modify how we approach youth ministry.” 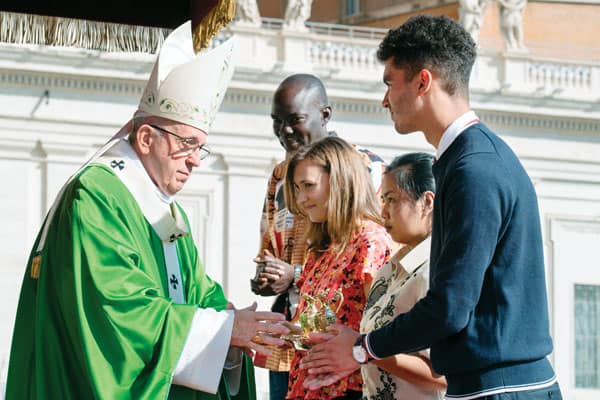 Pope Francis accepts the offertory gifts from young people at the opening Mass of the Synod of Bishops last October in St. Peter’s Square. (CNS/Vatican Media/Rome)

Catholics dedicated to youth and young adult ministry around the world followed the synod’s developments, says Christopher Derige Malano, pastoral administrator of the Newman Center at the University of Hawaii-Manoa.

Malano, who co-edited an Orbis book on small Christian communities in college campuses with Ahern, said book contributors held “listening sessions” with young people in Nairobi, New York and Rome, which yielded recommendations such as renewing the role of young people in local church governance.

Young people “want active participation and not in a tokenistic kind of way,” Malano says, adding he was grateful for this synod’s openness. Acceptance and support from long-time ministers at parishes is also important, he adds. “If we can open doors and think creatively, we would be able to achieve the sense of integration and participation and ownership in the Church,” he says.

As agents of ministry, Lamas says, young people can be engaged in “continuing peer-to-peer evangelization, taking the initiative, being agents of catechesis on social media or within their own communities.”

Besides supporting National Dialogue efforts, Johnson says, the Maryknoll Fathers and Brothers, who have been working with young people overseas for 100 years, is also reaching out to U.S. young adults with a bilingual survey and listening sessions. The aim is to “take the pulse” of young people in their 20s and 30s on the Church and world issues that concern them. Preliminary results show young people in the United States are concerned about climate change, wars and violence, as well as homelessness, economic justice and equality. Many of them volunteer their time to address these issues, Johnson adds.

“Young adults want to make a difference in the world. They are out there on the ground helping people,” she says. “I hope that by hearing where young adults are leading us and what they need, we can create resources that help them, fuel them and keep them in this work for the long haul.”

Johnson, who will be at World Youth Day with a delegation from the Archdiocese of Portland, Oregon, agrees. “Young adults carry a huge amount of hope,” she says. “I’m really excited to see this on the ground” with other young pilgrims in Panama.

Giovana Soria contributed to this article. 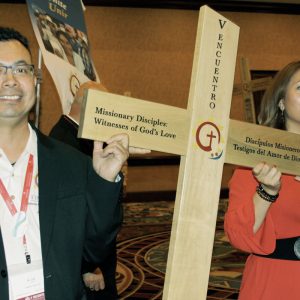