Catholic Nonviolence Initiative to present document on nonviolence and faith

This April, the Catholic Nonviolence Initiative—a global project supported by Pax Christi International, Maryknoll and other Catholic organizations—plans to present a document focused on the application of nonviolence in our faith tradition. The document, which will be presented during the second “Nonviolence and Just Peace” conference in Rome, follows from the first “Nonviolence and Just Peace” conference that was held in Rome in 2016.

At that time Pope Francis affirmed the work of Catholic peacebuilders, including Maryknoll missioners, who had gathered to share their stories, by reminding them that nonviolence is at the heart of the Gospel message.

“Your thoughts on revitalizing the tools of nonviolence … will be a needed and positive contribution,” the pope told participants.

“We agree with Pope Francis that humanity needs to refurbish all of the best available tools to help people fulfill their aspirations for justice and peace,” says Judy Coode, coordinator of the Catholic Nonviolence Initiative.

One of the first steps taken by the Initiative was to issue an appeal to the Catholic Church to recommit to the centrality of Gospel nonviolence. “The time has come,” the appeal states, “for the Church to be a living witness and to invest far greater human and financial resources in promoting a spirituality and practice of active nonviolence and in forming and training our Catholic communities in effective nonviolent practices. In all of this, Jesus is our inspiration and model.”

The appeal calls on the Church to take specific actions, including integrating nonviolence into the Church’s sacramental life, initiating a global conversation on nonviolence with people of other faiths, supporting and defending those whose work for peace and justice puts their lives at risk and continuing the development of Catholic social teaching on nonviolence as well as advocating for the abolition of war and nuclear weapons.

The Initiative recently wrapped up a yearlong effort to gather the expertise of Catholics engaged in active nonviolence around the world, especially those working in conflict zones such as South Sudan, the Philippines, Pakistan and Guatemala. Their experiences and knowledge helped to produce the document to be presented to the Vatican, which could potentially inform a future encyclical by Pope Francis.

The Catholic Nonviolence Initiative hopes this document will serve as the basis of a new Catholic teaching on active nonviolence and peacebuilding around the world.

The Initiative invites people everywhere to learn more about Gospel nonviolence and to seek ways to promote it in their everyday lives.

Faith in action:
• Sign and share the “Appeal to the Catholic Church to re-commit to the centrality of Gospel nonviolence” by clicking here. All individuals and organizations are invited to endorse the appeal.

• Pray for the success of the meeting in Rome in April between members of the Catholic Nonviolence Initiative, including Maryknoll representatives, and representatives of the Vatican. We pray the words of Pope Francis: “Nothing is impossible if we turn to God in prayer. Everyone can be an artisan of peace.” 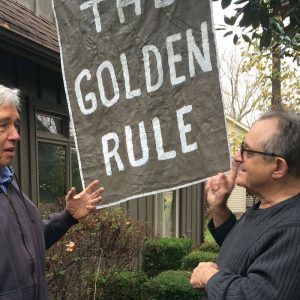 Partner in Mission dedicates himself to propagating the Golden Rule || My friend Ray Kalainikas has a banner hanging...