Returning from home leave in the States to the community of La Esperanza in El Salvador, where I serve as a Maryknoll lay missioner, I began visiting the 35 families who use our mobile library.

One book popped out of my wheelbarrow. As I picked it up, a woman and little girl passed me. “Would you like a book?” I asked. The woman approached.

She introduced herself as Yasmine and her daughter as Leslie. Yasmine took a book from the wheelbarrow, Doley, the Guatemalan Street Dog, and showed it to her daughter. “Do you want this one?” she asked, speaking very slowly.

Leslie didn’t respond, so the mother pointed to the book and then to Leslie. “My daughter doesn’t hear or speak well,” she said. “I’d like to sign the story to her. We’re learning sign language.” She opened the book and the girl’s eyes blossomed wide. Doley was barking up at two quetzals in flight. The text said, “Doley keeps birds up in the sky.” Leslie took the well-used book as if it were a Christmas treasure.

Since then, I’ve made a few rounds of book lending to Leslie and Yasmine. I asked the mother how to say “How are you?” in sign language. She placed open hands on each side of her heart and fingered them up to her shoulders and then put two thumbs in the air.

A few days later I saw Leslie and asked how she was. Her grin conveyed my sign language needed a lot of practice. So I went home and spoke in fingers and thumbs in front of a mirror until I could feel “How are you?” from the heart. I look forward to meeting Leslie again, to see how I’m doing with my new language.

Richard Dixon
Rick Dixon, from Orange, Calif., is a Maryknoll Lay Missioner whose ministry takes place in a squatter settlement that dates back to the El Salvador civil war.

New missioners sent forth to serve 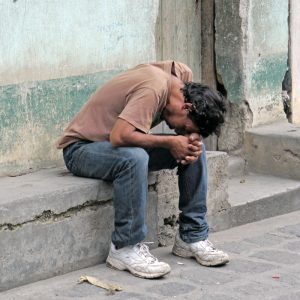 Even when we feel far from God, God never leaves us || When inviting people to come to church, I sometimes hear: “I...