" /> Jonathan Hill: Called to Share God's Grace and Love as a Maryknoll Priest

Jonathan Hill was awestruck by his sacred call the day before his diaconate ordination last December, when he took his permanent oath to the Maryknoll Society.

“Here I was, dedicating my life to the service of God’s most favored—the poor, the marginalized and the outcast,” he says. “I was giving my entire life to the missions with Maryknoll.”

As he happily awaits his ordination to the priesthood on June 1st, he reflects on his vocation journey.

The younger of the two sons of Larry David and Ramona Hill, Jonathan was born on March 9, 1983, into the seventh generation of a family that has lived in Florida since the 1840s. His call to mission, he believes, was a natural response to his environment.

“I grew up in my grandparents’ house, along with my parents and my older brother,” he says.

His maternal grandfather spent his career in the U.S. Air Force, and his grandmother briefly worked for the FBI before marrying his grandfather in Paris. Then, they lived in Germany.

“The house reflected their travels,” says Hill, who has an uncle, now a Baptist pastor, who was a missioner to Honduras. “They were also well educated, and often my childhood bedtime stories would come from the Encyclopedia Britannica. I often read the National Geographic and loved stories of the world.”

Jonathan Hill during his overseas training program in Tanzania. (Courtesy of J. Hill/Tanzania)

Hill’s desire to see the world melded with the strong religious upbringing of his Southern Baptist family. He says he first felt called to overseas mission as an eighth-grader, but put it off.

In high school he joined a program of the U.S. Navy that offered a scholarship to the University of Florida. Wanting to become a naval doctor, he grew unhappy with a major in nursing that he could not change because of the scholarship. Overwhelmed by the rigorous schedule of the university and military duties, he stopped attending church.

“This led me to leave the program and to return home, seeking a new start,” he says.

At an Easter service in 2002, Hill again felt God’s call and this time decided to follow it. He attended the Baptist College of Florida and engaged in mission activities, including, building a hospital in Honduras, working with refugees in Rome and participating in Bible study groups in the Philippines.

In the Philippines, Hill went to a religious service at an African-American Holiness Church with a friend, whose father was the pastor. The difference in religious teaching and beliefs challenged his Baptist faith.

He returned to the States and while working at his father’s gas station in Chipley, Fla., asked God “for a clear sign and direction to find truth in the midst of thousands of denominations.” That same day, he went home, turned on the television and saw a program where an ex-Baptist minister was explaining why he became Catholic.

“Eventually, I felt that unless I became Catholic, I would not be true to my conscience and where I felt the Spirit guiding me,” the future priest says.

In 2004, Hill was confirmed a Catholic in Panama City, Fla., and was offered a job to open and run a gift shop at his home parish, St. Dominic Catholic Church, while he finished an associate degree in business administration at Gulf Coast Community College.

The call to mission was still burning in Hill’s heart when he met Maryknoll Father Michael Sloboda, a mission promoter working in Florida. “He stopped by the parish for a few minutes and I learned about Maryknoll and their work,” says Hill.

Two years later Hill was working in Wyoming and discerning whether to enter the diocesan seminary in Cheyenne or join Maryknoll. Again, he asked God for a clear sign.

“I lost my job due to the economic recession, and as I was leaving, I received a call from Maryknoll,” Hill says. “God’s clear sign for me was answered.”

Hill entered the Maryknoll Fathers and Brothers in 2010, earned a bachelor’s degree in philosophy from Loyola University in Chicago and a master of divinity degree from Catholic Theological Union in Chicago.

He spent his two-year Maryknoll overseas training program in Tanzania, where he fell in love with the people and the East African culture and where he will return after his ordination.

“In Tanzania, my work was with altar servers in a Maryknoll parish in Mwanza, 60 boys and girls in all. I would train them, lead them in daily recreation and in caring for the elderly infirm and homebound,” says Hill, who felt inspired by the people he met in mission.

One homebound woman stands out.

“I would visit her each week,” he says. “She was quite a distance away from the parish on foot, and her house was at the top of the rocky cliffs that make up the landscape of Mwanza. She was nearly blind, but she was always joyful. She would sit next to me and hold my hand while we talked. I think about her often and miss her.”

“He was probably the busiest person I have ever met, but he always had an air of patience, kindness and generosity about him,” says Hill. “I never heard an angry word from him or experienced impatience, whereas I certainly felt it often. He is an example for me of how I wish to be: a gentle shepherd among the people, always taking the time to listen to their concerns and cares and to be responsive in the way they need me to be.”

Self-described as a sinner who has experienced great grace and love from God, Hill expresses a strong desire to be in relationship with people in a way that they, too, can experience that love and grace.

“God calls us in different ways to be effective for God’s purpose in the world,” he says. “I don’t think I would have been happy being successful in the business world; that is not my call. Other people are called to be priests in their home culture; that is not my call. I get energy from living and traveling in places where it is not apparent that I belong. For me, that energy comes from God’s Spirit and call in my life.” 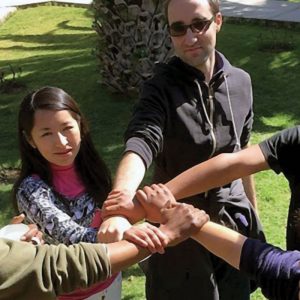 Ryan Thibert, from Canada, takes his permanent oath as a Maryknoll brother || Recalling his first visit to the Maryknoll...