Maryknoll priest returns to Yucatán, Mexico, to celebrate missioners who served there

One balmy evening last November, I walked in liturgical procession behind the panoply of acolytes, readers and a deacon through the arches of the church of San Sebastian in Mérida, Yucatán, Mexico. As the presider at this Mass in honor of Maryknoll missioners who served in the Yucatán for decades, I was accompanied by Father Lorenzo Mex, the pastor of what used to be our parish in Yucatán.

As I entered the church, I saw the wizened faces of the earlier generation of parishioners who made this an excellent community. I passed in front of the side chapel in whose walls rested the remains of four Maryknollers, and I was conscious of being the symbol of the spiritual presence of all our Maryknoll priests, brothers and sisters who graced this country with missionary activity for 69 years.

Present at this Mass were grandchildren of Alvaro Dominguez and Eufemia Juanes, who gave hospitality to our pioneering group of Maryknollers in 1943. In my homily, I focused on the great people who enshrine for us the best of our spiritual values. Providentially, that day’s Gospel from Luke mentioned the “poor widow” praised by Jesus in the temple, reminding me of the poor widow in a nearby community who in 2002 in response to a recent hurricane donated anonymously a portion of a kilo of rice, all she could afford, most of which had served for her family’s meals. My message was that the great and the small have been giving marvelous Christian testimony here in this community for decades.

After the Mass, all were invited outside for refreshments where the local Maryknoll Affiliates of the Yucatán had a table to recruit folks to their chapter, continuing the spirit of Maryknoll there.

Finally, an emotional highlight of my visit was meeting 90-year-old María Teresa Muñoz, who at learning that I am a Maryknoller, shared her memory of meeting Maryknoll Bishop James E. Walsh at her home in 1942 when she was 14 years old. He was passing through the area en route to Bolivia to set up Maryknoll’s first mission in Latin America.

John P. Martin, M.M.
Father John Martin was born in New York City and was ordained a priest in 1966. His first assignment was to Mexico from 1966 until 1975, and he later served in Bangladesh. 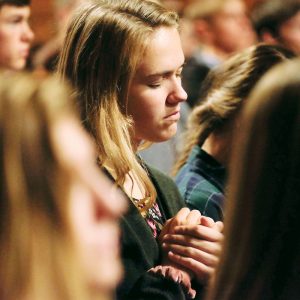 Priest reflects on how to see the Holy Spirit at work || Faced with life-changing decisions, as people of faith we’re...