Sent Forth to Serve in Mission

The joy of the Gospel that Pope Francis describes for those who encounter Jesus was palpable on the Maryknoll Society campus in Ossining, N.Y., one weekend last spring. Two young men were committing their lives to sharing God’s love with the world, Jonathan Hill as a Maryknoll priest and Ryan Thibert as a Maryknoll brother. Join us in reliving the three-day celebration. 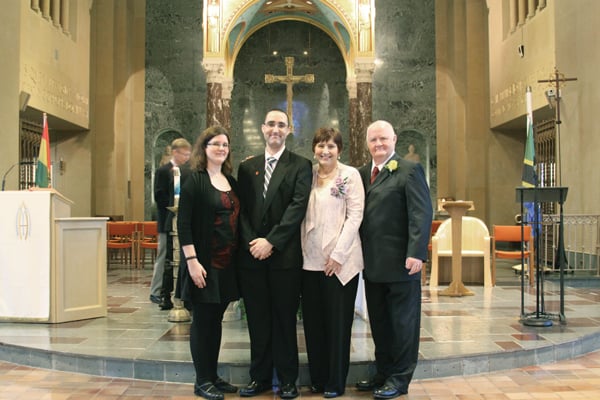 Parents Rox-Ann and Larry Thibert and sister Jennifer join Ryan at the Solemn Evening Prayer Service during which he takes his permanent oath as a Maryknoll brother. (His brother Aaron could not be present because his flight was canceled.) “I’m amazed at God’s goodness to our family,” says Rox-Ann Thibert of Ryan’s religious vocation, but Ryan praises his parents: “I am who I am because of their unconditional love.” 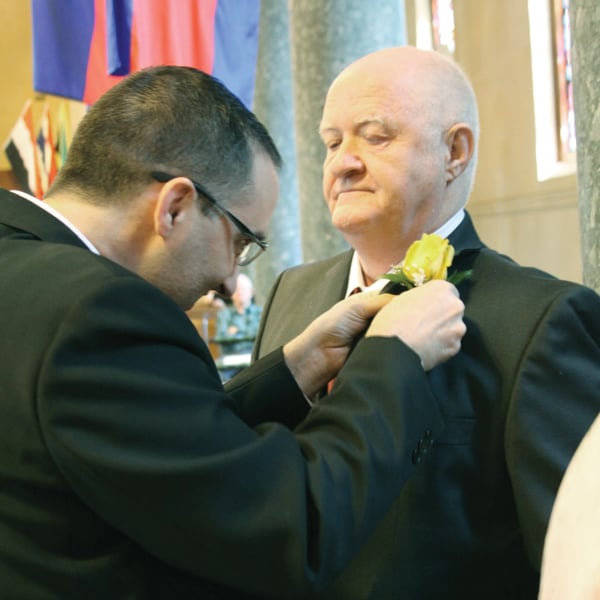 Ryan pins a boutonnière on his proud dad’s lapel. “I brought you a boy and you gave me back a man,” Larry Thibert says to the Maryknoll Fathers and Brothers. 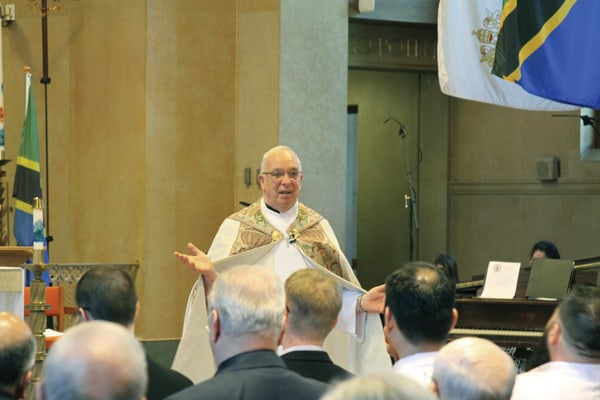 In his homily, Maryknoll Superior General Father Raymond Finch alludes to the day’s feast of the Visitation and likens the missioner’s role to that of Mary, who “immediately after saying ‘yes’ to God’s call rushes out to share the good news with her cousin Elizabeth.” 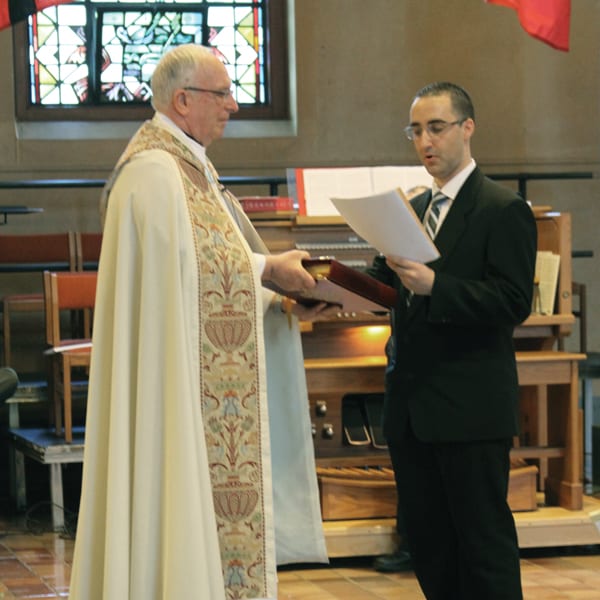 Brother Ryan Thibert places his hand on a Bible held by Father Raymond Finch and in a clear, steady voice declares, “I promise and swear that I will consecrate my life to the missions committed, or to be committed in the future, to the Society, to observe the Constitutions and to obey my legitimate Superiors. So help me God and these His Holy Gospels.” 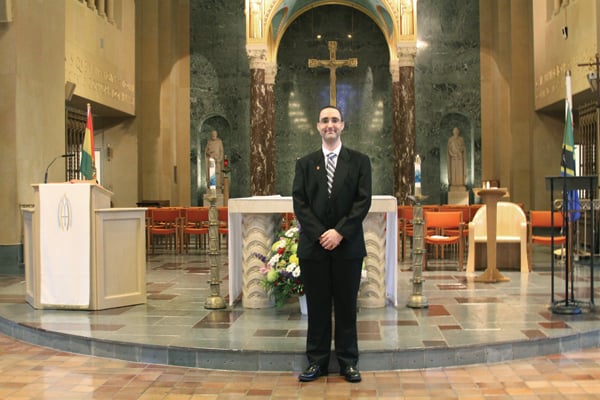 “I feel a sense of deep peace and serenity knowing my vocation as a Maryknoll brother has been finally realized through the grace of God,” says the 37-year-old native of Ontario, Canada, as he takes this final step in his formation process, following eight years of study and service.

On the day of his ordination, Jonathan Hill is surrounded by his family (left to right): nephew Mason, brother Jeremy, mom Ramona, dad Larry, sister-in-law Jessica and (front) nephew Colton, all members of the non-denominational Evangelical Church. Jonathan says he risked their rejection when he became a Catholic in 2004. “But I only experienced love and care,” says the 36-year-old native of Chipley, Fla. His mother says, “The Body of Christ has different parts. We are all called to serve and bring others to Christ.”

The theme of service runs through the readings chosen by Jonathan Hill. The Old Testament passage from Isaiah, read by Jonathan’s brother Jeremy, describes the mission of every priest and prophet: “to bring good news to the poor.”

“I felt God’s spirit and the weight of Maryknoll during the laying on of hands,” says Jonathan Hill as all priests present lay their hands on him, conferring the gift of the Holy Spirit. “All those hands connecting me to God’s presence made me feel the privilege of being in that line.” 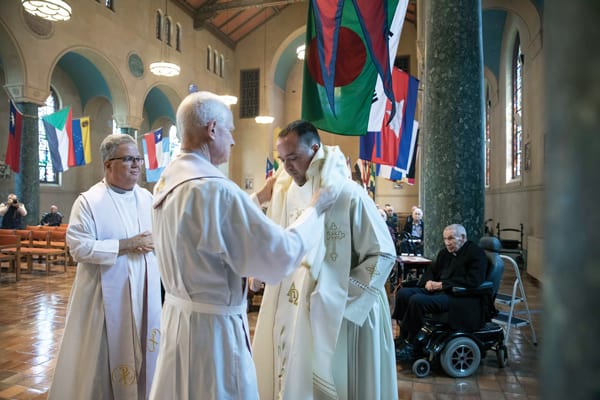 Maryknoll Fathers John Waldrep (left) and John Eybel vest Jonathan in a stole and chasuble, which he will wear celebrating the Eucharist. These are gifts from the people of Mabatini parish in Tanzania, where Jonathan served during his overseas training. “The gift brought me to tears,” says Jonathan, adding that the vestments were hand-sewn by the Bujora Women’s Empowerment Center run by African sisters. 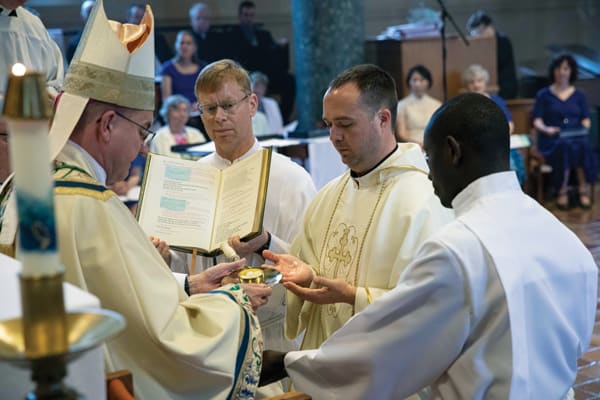 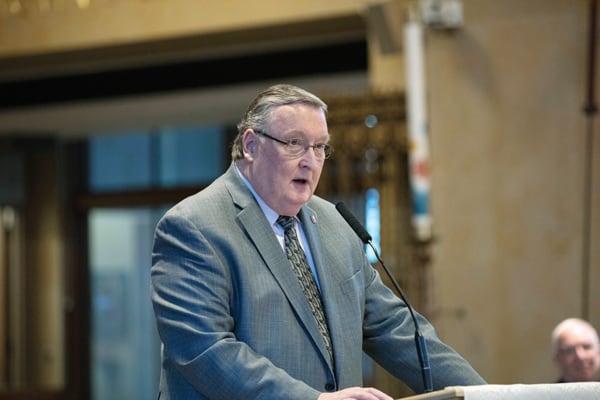 Quoting Pope Francis, Maryknoll Brother Wayne Fitzpatrick tells the two missioners about to be sent forth: “Do not be afraid of holiness … do not be afraid to let yourself be guided by the Holy Spirit.” 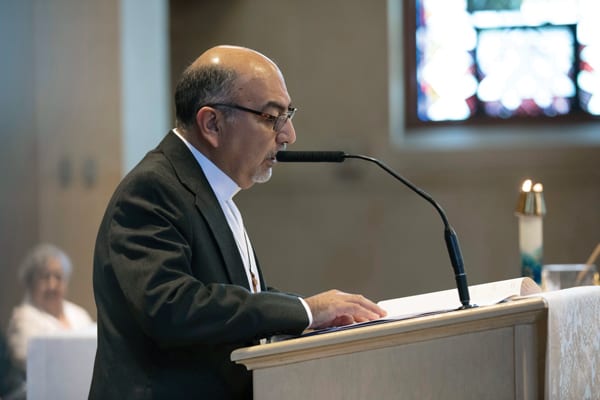 Maryknoll Father Raymond Finch confers the mission crucifix on Ryan Thibert and Jonathan Hill and says, “Wear it humbly, spending your life in loving service to the Church and the people of God.” 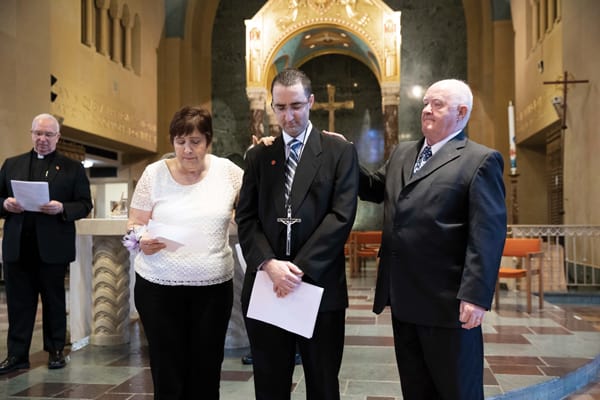 Rox-Ann and Larry Thibert bless their son Ryan as he goes to Bolivia: “May your presence, your words and actions always reflect the love and compassion of Jesus.”

Larry and Ramona Hill send forth their son Jonathan to Tanzania with the prayer: “May your hands build and your heart preserve what is good and beautiful in our world.”

For information on becoming a Maryknoll priest or brother, go to MaryknollVocations.org

Featured Image: Standing by the Maryknoll Society mission bell, Father Jonathan Hill (left) and Brother Ryan Thibert are ready to be sent forth to their missions in Tanzania and Bolivia, respectively. (O. Duran/U.S.) 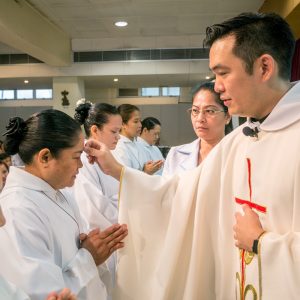