When 6-year-old Agness came with her mother to enroll in kindergarten at Mercy Montessori School in Mwanza, Tanzania, the child had a history of passive behavior in class at her previous school.

During the pre-registration interview with Agness and her mother, Mercy Montessori’s director, Maryknoll Sister Celeste Derr, sensed that the girl’s “emotional problems” might stem from her fear of being physically punished by her mother if she didn’t do well or made mistakes.

Corporal punishment of children is not only a common practice among Tanzanian parents—many of whom believe firmly in the African equivalent of the old adage “spare the rod, spoil the child”—teachers also regularly administer corporal punishment such as beatings in school. In Agness’ case, the mother readily admitted to beating the girl to discipline her. 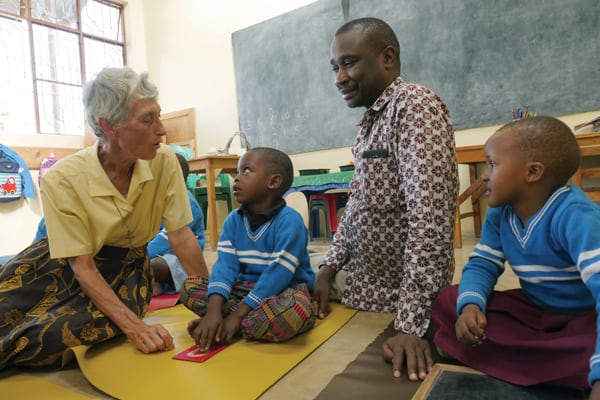 At the Mercy Montessori school, located on the church property of Sacred Heart of Jesus parish in the Ilemela section of Mwanza, Tanzania, Sister Celeste Darr and the parish pastor, Father Pamphilias Madata, join some of the pupils in a learning exercise. (Photo: S. Sprague/Tanzania)

“Even the day of the interview with the child, I was very concerned.,” Sister Derr says. “As we did some work with numbers and letters, I was afraid that if she didn’t do well, if she didn’t answer the questions, when she got home, she was going to get beaten.”

For Sister Derr, eschewing physical punishment and emphasizing the positive are core values, and the name of Mercy Montessori School is no mere coincidence. “The mission is really important: to be merciful and compassionate caregivers here in our school,” she says. “No beating, no shaming,” she says, just “positive reinforcement of educational concepts.”

When Sister Derr started her mission in Tanzania 12 years ago, her goal was to work with vulnerable youth. The missioner from Akron, Ohio, had years of experience as a teacher and pastoral worker as a sister with the Akron Dominicans, including working with runaway youths at Covenant House in New York City.

In 1990, she went to Guatemala with Maryknoll as a sister associate and worked with indigenous people in San Andrés Sajcabajá parish in the Quiché province in the Guatemalan highlands. Her ministry there included helping establish an education center at the Guatemala parish for indigenous youth to study from pre-primary through ninth-grade level. In 2005, Sister Derr decided to transfer to the Maryknoll Sisters as a full member and also opted to go to Mwanza, Tanzania. 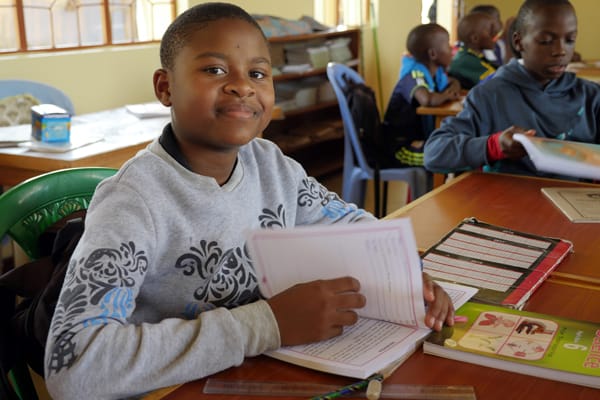 A middle school student at Mercy Montessori School in the Igombe section of Mwanza, Tanzania. Mercy Montessori, was founded by Maryknoll Sister Celeste Derr focuses on education with a gentle and compassionate touch. (Photo: S. Sprague/Tanzania)

“When I came here, I wanted to work with vulnerable children,” says Sister Derr, who is now 72. She adds that initially she worked in the country with Maryknoll Lay Missioner Joanne Miya at an after-school program (see story, page 34).

When the pastor of Sacred Heart of Jesus Church asked her soon afterward to help set up a preschool at the parish, she reluctantly agreed—with conditions: she believes in education with a gentle and compassionate touch.

“I explained to the pastor that, if I got involved in a program, I would prefer a model such as Montessori, a model different from the traditional Tanzanian model. We would use positive learning methods. There would be no hitting or beating, as I had already been exposed to that in Tanzania. He agreed.” 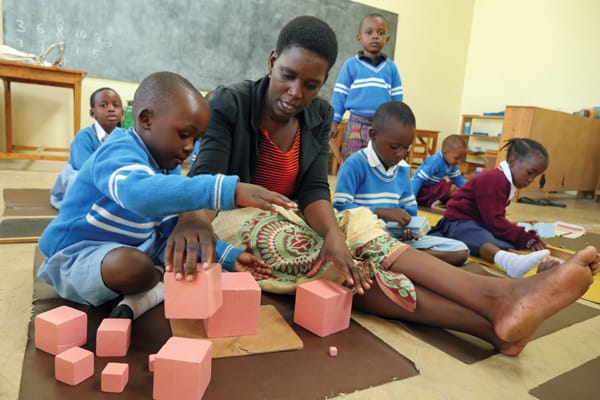 Since then, the program has grown from a preschool to an elementary school up to seventh grade. This year Mercy will graduate its first class of students, including many who started in the preschool. The parish hopes eventually to expand the program even further to educate the students all the way through high school.

Mercy Montessori now has more than 100 students in several preschool classes in two locations. It also has 222 students in grades one to seven.

One preschool is at the parish compound, where Mercy Montessori started, and the newly constructed pre/primary school is about 25 minutes away in Igombe, on the rural outskirts of Mwanza, on land given to the school by Bishop Jude Thaddaeus Ruwa’ichi.

The schools’ donors, including the Maryknoll Fathers and Brothers, provided funding for two buses to transport students to the Igombe location. 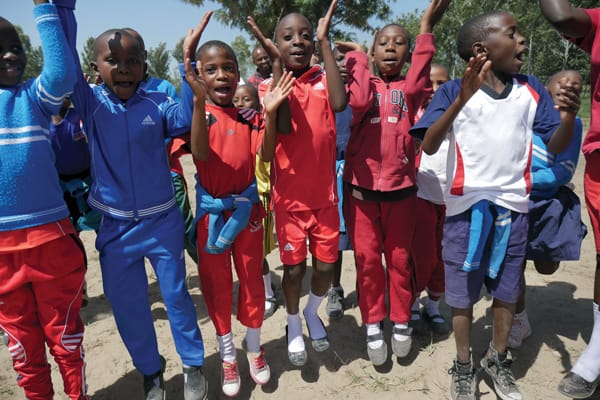 A group of students who attend Mercy Montessori elementary school in the Igombe section of Mwanza, Tanzania, jump for joy during an outdoor school assembly. (Photo: S. Sprague/Tanzania)

While the school is not limited to students with physical, emotional or learning challenges, she says, the staff is attentive to the needs of individual students and so Mercy has drawn students whose parents realize their child might need special attention and/ or absolutely require a positive environment.

Achieving that positive learning environment, however, takes work because corporal punishment is ingrained in the culture and is seen by many people as a necessary part of child rearing. “It’s not always easy with our Tanzanian teachers, who have backgrounds with lots of beatings in their families, also lack of personal recognition and a lack of positive reinforcement for the good things they can do,” she says. “So it’s work here with our students; it’s work here with our Tanzanian brothers and sisters also.”

The need for positive reinforcement goes beyond trying to end the hitting of children as an acceptable form of punishment. She sees a general lack of positive recognition for things students do well in the comments parents write on their children’s report cards. ”We ask them to write their comments, and they’ll say, ‘You can do better. Try harder,’ even if the child has A’s and maybe has A-pluses,” she says.

“What we’re trying to do is break down that whole idea of having to be perfect,” she says. “Accepting children as they are, helping parents to understand more about the reality of their child, the reality of all of us, and trying to help parents also reflect on their (own) behavior.” 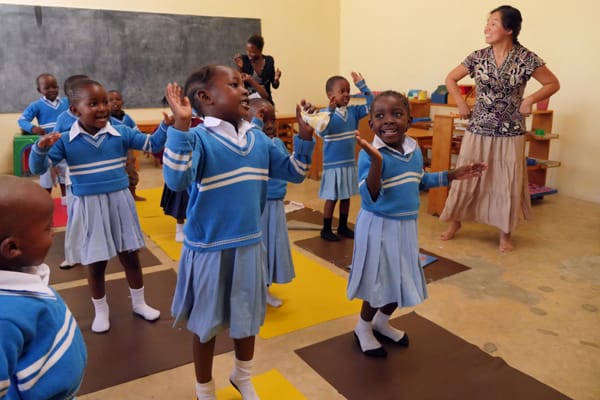 Guadalupe Petro, right, a Maryknoll lay missioner, leads pupils of the Mercy Montessori School in Mwanza, Tanzania, in a lesson that is reinforced with song and dance. (Photo: S. Sprague/Tanzania)

Guadalupe Petro, a Maryknoll lay missioner who was assisting Sister Derr with administrative tasks at the school and helped set up the new school’s library, says the culture can change. She recalls growing up in Peru and being hit by the principal on the hand or on the behind for being late to school. Today, she says, the culture has changed. “It’s not like that anymore,” she says.

Peru is one of 56 countries worldwide that have prohibited outright the corporal punishment of children, including in their homes, according to the Global Initiative to End All Corporal Punishment of Children. Neither Tanzania nor the United States have such clear-cut prohibitions.

“I know this is going to change, but it has to be more schools, more teachers, more parents; then they can do it,” says Petro, who has since completed her mission in Tanzania and has returned with her lay missioner husband, Charles Petro, and their two children to the United States. 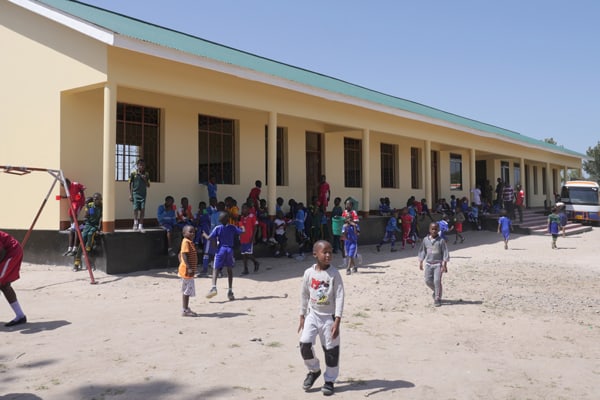 Students at the Mercy Montessori School in Igombe, on the outskirts of Mwanza, Tanzania, take a break from classes during an outdoor assembly. (Photo: S. Sprague/Tanzania)

Sister Derr sees that change happening before her eyes, even if it is sometimes just one child or one family at a time.

Fortunately for Agness, her mother listened when the sister explained that things are done differently at Mercy Montessori. Agness’ mother agreed immediately to stop hitting the child as a form of punishment.

“The first two years that she was here, it was very difficult for her to come out of herself,” Sister Derr says of Agness, but today the girl is doing well, has friends, appears happy, passed her fourth grade National Examinations with a B and is in the fifth grade at Mercy Montessori.

Called to Fullness of Life 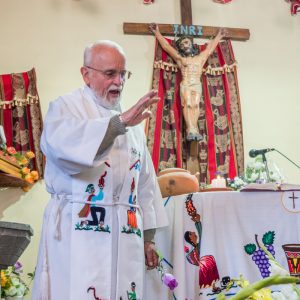 Missioner and indigenous preserve the faith in Puno || Before the All Saints’ Day Mass in the highland village of Jayllihuaya,...