By demanding respect for the cultures of indigenous peoples, Pope Francis was not promoting pantheism, but — tapping into his Jesuit roots — urging respect for a worldview that sees God in all things.

The pope Oct. 9 told the Synod of Bishops for the Amazon that he was disappointed to see a newspaper evoke the Carnival celebrations in Rio de Janeiro to describe the synod’s Oct. 7 opening prayer service with its Amazonian symbols and song.

Many of the synod members, most of whom minister in the Amazon region, agreed with the pope. The Vatican News summary of the synod discussion Oct. 9 said, “the view of the synod hall enlarged to include the theology of creation, where the Word of God resides.” 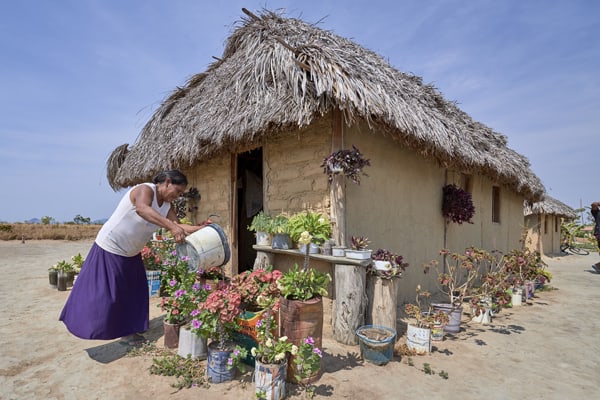 That understanding is shared by many Amazonian indigenous peoples, who consider the natural world sacred because God is present in all of creation. That is very different from pantheism, or the belief that elements of nature themselves are gods, experts said.

“Our Christian faith and the church teach us to seek and to find God in all things, as St. Ignatius says in the Spiritual Exercises. There is no pantheism in this,” Jesuit Father Adelson Araujo dos Santos, a professor at the Pontifical Gregorian University’s Institute of Spirituality in Rome, told Catholic News Service.

“Pantheism means to believe that a tree is a god, the sun is a god,” said Moema Maria Marques de Miranda, a lay Franciscan who is an observer at the synod.

The theology of creation being discussed at the synod instead reflects what St. Bonaventure, a Franciscan, called “panentheism,” the “recognition that all of creation is an expression of the love of God,” she told CNS. 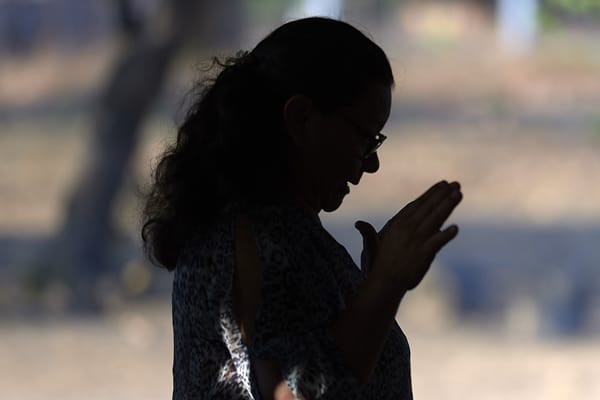 A woman prays during Mass April 6, 2019, in St. Ignatius, Guyana. Franciscan Father Joao Messias Sousa, who works among indigenous in the Amazon, said the people believe “God is in all things, but those things are not gods.” (CNS Photo/Paul Jeffrey)

When St. Francis renounced a life of luxury and went barefoot into the countryside, the reawakening of his senses to the natural world “made him realize that all things, human and nonhuman, have one and the same Father,” Miranda said. “There is a profound connection, because the love of God is present in every being created by God, just as the love of parents is present in each of their children.”

When Europeans arrived in South America four centuries after St. Francis had his revelation and 300 years after St. Bonaventure wrote about panentheism, they misinterpreted the Amazonian indigenous people’s relationship with the natural world, she said.

“The Amazonian people relate to the cosmos as part of it, and that makes them part of the earth,” Archbishop Roque Paloschi of Porto Velho, Brazil, told CNS. “The earth, the water, the air, the forests are part of them and make them part of the whole. Everything is sacred, and therein (lies) the manifestation of the sacred.”

While St. Bonaventure wrote about panentheism as a theological concept, the Munduruku people of Brazil live it, said Franciscan Father Joao Messias Sousa, who works with the Munduruku in Brazil. 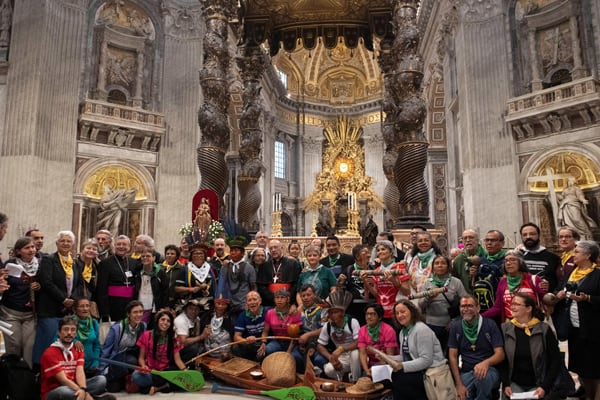 People are pictured during a prayer service at the start of the first session Synod of Bishops for the Amazon at the Vatican Oct. 7, 2019. Among those pictured is Cardinal Pedro Barreto Jimeno, center, of Huancayo, Peru. (CNS/Vatican Media)

For them, “God is in all things, but those things are not gods,” he said. That means “God is not distant. He is close by.”

When missionaries build chapels in Munduruku communities, he said, the people accept it, but wonder why it is necessary to have a building in which to worship.

“The sacred dimension, for them, does not have a wall around it,” he said. “How are you going to build a place for God if God is in everything?”

Many Amazonian people also believe that every element of creation has a spirit, often translated into Spanish or Portuguese with the word for “mother.” That does not mean they see the trees or animals as gods, but it reflects their belief that the sacred is present in the world, Father Sousa said.

Recognizing the sacred, he said, means “loving the presence of the Creator in everything. When you speak of the mother of the fish, of the forest, of the animals, it is (an expression of) respect, because they are sacred, the same way (a person is) sacred.”

Because of that divine presence in creation, a person cannot be the owner of those things and must not destroy or use them irresponsibly, he added.
Pope Francis’ call for an end to the destruction of the environment for economic gain therefore is supported by both the Christian understanding of creation and the indigenous belief that God is in present in all things.

Deforestation and harm to the land and rivers from extractive industries, such as logging and mining, and from large infrastructure projects, such as hydroelectric dams, were among the problems most often mentioned during the presynod consultations held in church jurisdictions throughout the Amazon region.

Those concerns are reflected in the synod’s working document, which also notes that the ancestral wisdom passed down from generation to generation among Amazonian indigenous people “inspires care and respect for creation” and prohibits abuse of the environment.

The document “simply recognizes that some of the values present in indigenous cosmovisions, which involve greater care for and preservation and protection of nature, help us remember that, as Christians, we have to perceive the world as creation, where man contemplates the features of God,” Father dos Santos said.

Ultimately, Archbishop Paloschi said, the theology of creation, of God’s presence in everything, runs through all of church history.

“St. Augustine says that the first book written was creation,” he said, “so there is no contradiction between the Christian faith and the spirituality of the Amazonian peoples.”

For more Catholic News Stories on the Amazon Synod see:

Featured Image: A woman paddles a canoe in Santarem, a city alongside the Amazon River in Brazil’s northern Para state. Franciscan Father Joao Messias Sousa, who works among indigenous in the Amazon, said the people believe “God is in all things, but those things are not gods.” (CNS/Paul Jeffrey) 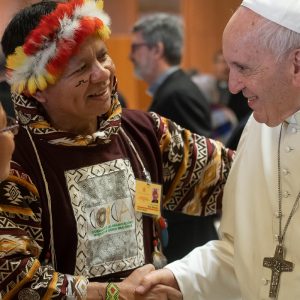