Assembly addresses key issues for Pope Francis:
Care of creation and cry of the poor and the displaced

Poor people from the Amazon have shown that God’s creation must be treated “not as a resource to be exploited but as a home to be preserved, with trust in God,” Pope Francis said as he celebrated Mass to mark the end of the Synod of Bishops for the Amazon in October.

The synod brought together bishops, priests and religious, and lay men and women, including indigenous people, from the nine Amazonian countries, with some participants regularly wearing their native dress and feathered headdresses. 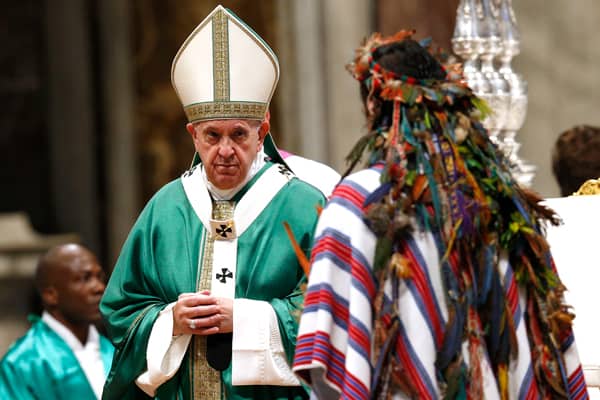 Pope Francis accepts offertory gifts from an indigenous man during the concluding Mass of the Amazon Synod. (CNS/Paul Haring/Rome)

During the assembly, indigenous observers described the environmental devastation and social problems caused by mining in the Amazon. They told a history of plundering of timber, rubber, minerals and other natural resources in the Amazon. That rapaciousness, they said, has displaced people from their land and spurred violence, including human trafficking and the murder of people who try to defend their territories.

The synod’s final document, released at the end of the assembly, reflected signature issues for Pope Francis, specifically concern for the environment and the plight of the suffering poor and the displaced.

The synod members said the “unprecedented” environmental and social crisis in the Amazon calls for “a deep personal, social and structural conversion” that will lead to new ways of caring for “our common home.” 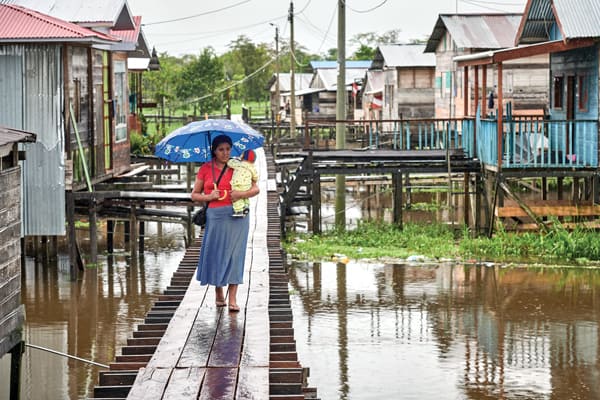 Carrying a child, a woman walks along a raised sidewalk in Islandia, a town in the Peruvian
Amazon. (CNS/Paul Jeffrey/Peru)

“God has given us the earth as a gift and as a task, to care for it and to answer for it; we do not own it,” the synod members wrote. They said that in seeking new forms of development that are just and promote solidarity, the Church must learn from the region’s original peoples “in a dialogue of wisdom.”

“In this synod we have had the grace of listening to the voices of the poor and reflecting on the precariousness of their lives,” Pope Francis said at the closing Mass.

The “scarred face of the Amazon region,” he said, shows that past experience has not been enough “to stop the plundering of other persons and the inflicting of wounds on our brothers and sisters and on our sister earth.”

Synod members said in their document that caring for the earth requires an integral ecology that connects “the exercise of care for nature with the exercise of justice for the most impoverished and disadvantaged on earth.” Integral ecology, they said, is not just one path open, “it is the only path, because there is no other viable route for saving the region.” 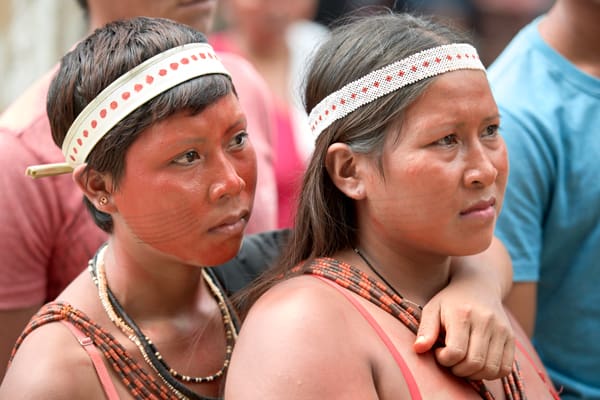 Protesting a plan that would limit their access to healthcare, indigenous women march through the streets of Atalaia do Norte in Brazil’s Amazon region. (CNS/Paul Jeffrey/Brazil)

Denouncing the environmental destruction and human rights violations related to extractive industries, synod members also affirmed their support for campaigns that call for institutions, including the Church, to give up investments in extractive companies that cause environmental damage or social harm. Though it may not be possible to change that model of development in the short run, the Church must decide where it stands, and what implications faith has for politics and ethics, synod members said.

“The future of the Amazon is in the hands of us all, but it depends mainly on our immediately abandoning the current model that is destroying the forest, not bringing well-being and endangering this immense natural treasure and its guardians,” they wrote. 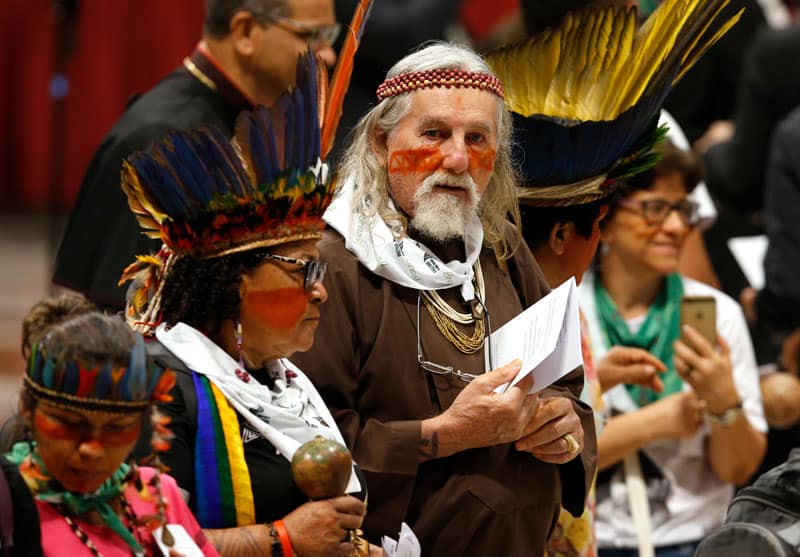 People participate in a prayer service in St. Peter’s Basilica at the start of the first session of the Synod of Bishops for the Amazon at the Vatican in October 2019. (CNS photo/Paul Haring)

Those guardians are the Amazonian communities, especially indigenous peoples, who protect the forests and rivers of the Amazon.

“They have clearly stated that they want the Church to accompany them, to walk with them, and not to impose on them a particular way of being, a specific form of development that has little to do with their cultures, traditions and spiritualities,” the synod members wrote.

“They know how to take care of the Amazon, how to love and protect it,” the members added. “What they need is for the Church to support them.”

Indigenous people who were synod observers asked the Church to back them in demanding legal recognition of their territories, to protect against incursions by illegal loggers and miners or the concession of their lands to development projects or extractive industries.

The synod document specifically mentioned the importance of defending territories inhabited by semi-nomadic people who shun contact with outsiders.

The presence of indigenous regalia during the opening Mass three weeks earlier had prompted the pope to rebuke a bishop who made a derogatory comment about an indigenous man wearing his headdress. During the synod some Catholic groups also claimed that a carved image of a pregnant indigenous woman that was used during some prayer services was a pagan idol. 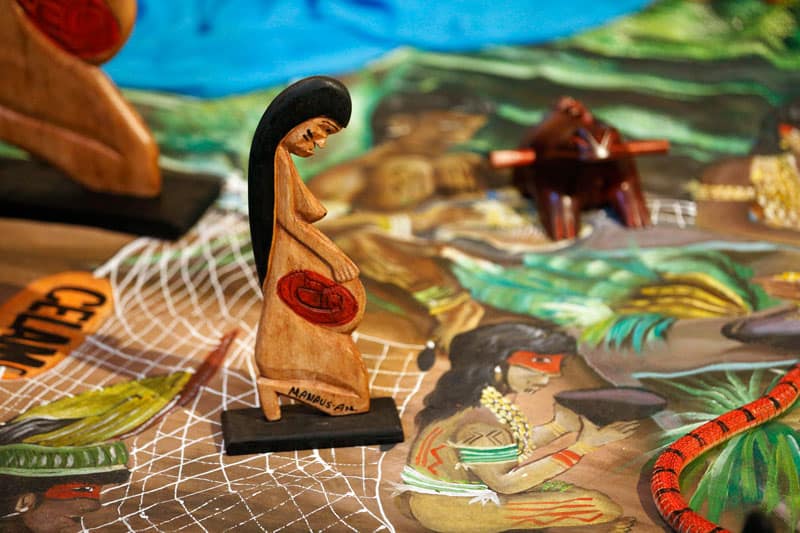 A wooden statue of a pregnant woman is displayed at the Church of Santa Maria in Traspontina in Rome in October 2019. The church near the Vatican hosted exhibits on the Amazon region during the Synod of Bishops for the Amazon. (CNS photo/Paul Haring)

Pope Francis urged synod participants, however, to reflect on “whether we too may think that someone is inferior and can be tossed aside, even if only in our words.” He also expressed solidarity with the Amazonian people by carrying a carved wooden crosier at the closing Mass, instead of using a crosier made of precious metals.

As a follow-up to the synod, the members proposed creation of a pastoral office that would work with Church institutions, other organizations and representatives of indigenous peoples to track socio-environmental conflicts and help the Church “take a position, make decisions and defend the rights of the most vulnerable.”

The synod called for parishes and dioceses to create ministries of “care for our common home,” to promote integral ecology, raise awareness of the teachings in Pope Francis’ encyclical Laudato Si’, and engage in education and advocacy. 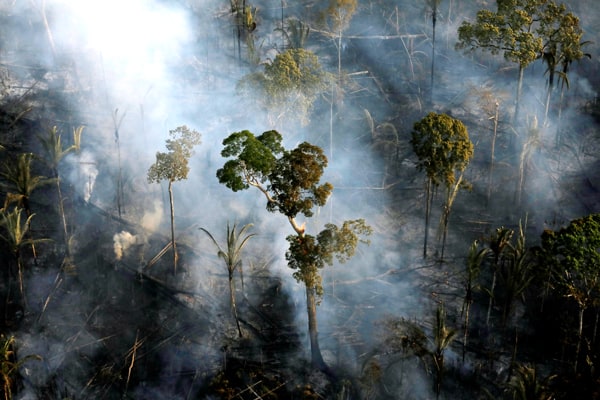 Smoke billows during a fire in an area of the Amazon rainforest near Porto Velho, Brazil.
(CNS/Bruno Kelly, Reuters/Brazil)

Members of the synod asked that women be given leadership roles in the Catholic Church, although they stopped short of calling for women deacons. Speaking after the vote on the document, Pope Francis said the synod’s discussion on women “falls short” of explaining who women are in the Church, particularly “in the transmission of faith, in the preservation of culture.”

Instead, the document asked that Amazon synod members be able to share their experiences and reflections with members of the commission Pope Francis set up in 2016 to study the role and ministry of women deacons in the New Testament and in early Christian writings.

“Let us pray for the grace to be able to listen to the cry of the poor,” Pope Francis said at the closing Mass. “This is the cry of hope of the Church.” 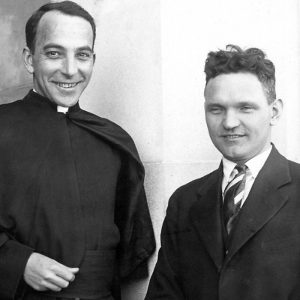 Church studies sainthood cause for Maryknoll’s first seminarian and pioneer missioner to China || The name of Maryknoll...