||
Story and photos by Joshua Irwandi

Ever since his arrival 40 years ago among the Asmat people of West Papua, Indonesia, Maryknoll Father Vincent Cole has had a clear mission to these indigenous people. “My job as a missioner is to promote a critical appreciation of their own culture in the light of Gospel values,” he says. “It all starts with our fascination with the Asmat.”

That means admiring their strength rather than trying to fix their weaknesses. Integrating Catholicism with Asmat spirituality has been Father Vince’s approach since he stepped foot on the swampy land of the Asmat on the western side of the island of New Guinea. 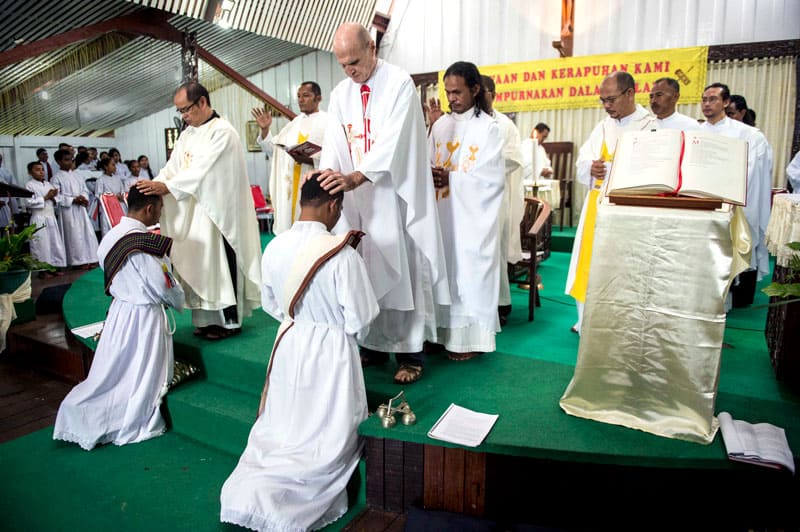 Father Vincent Cole, who serves the Asmat indigenous people of West Papua, Indonesia, blesses Father Siprianis Flori Lana Koten, from the Indonesian island of Flores, who is being ordained to serve in the Diocese of Agats. Photo by Joshua Irwandi/Indonesia

The church next to his house is a prime example. Instead of the usual Gregorian-style building, this church follows the shape of the Asmat traditional longhouse. Gathering material from the jungle, the people built their church in Sa-Er, one of 10 villages of Sawa-Erma parish where Father Vince is pastor.

Rather than stamping Roman rites on people who never heard of Jesus before Catholic missionaries arrived in this remote area after World War II, Father Vince collaborates with the Asmat in incorporating their reality into liturgical celebrations. For instance, he celebrates baptism in the jungle, where they spend most of their time. I witnessed a baptism.

Father Vince was hoisted on a stretcher paraded into the jungle with loud chants to welcome him as the representative of the Holy Spirit. The procession made its way to an area symbolizing a mother’s womb. An old woman squatting inside the area made a humming sound each time parents carried their children to Father Vince, who baptized them with blessed forest water. The baptism was as close to a grand Asmat ritual feast as possible. The names of the 90 newly baptized were carved onto a wooden pole erected on the baptismal site. 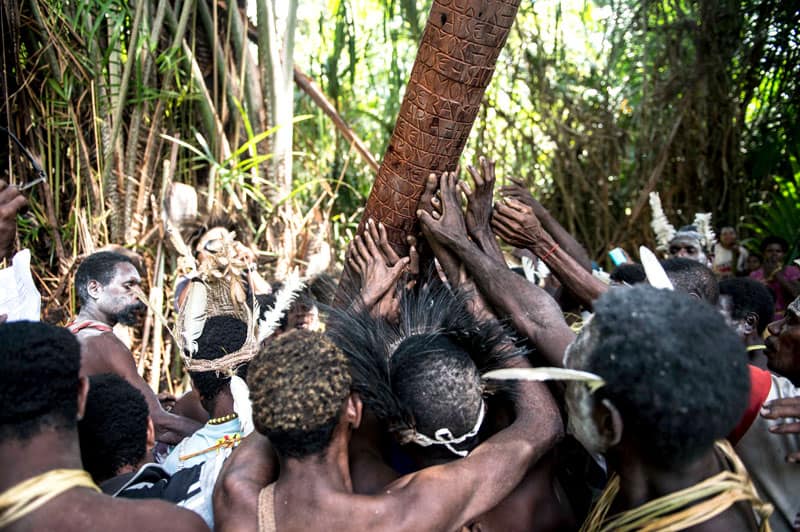 Following a baptism in the jungle of West Papua, Indonesia,, Asmat people erect a wooden pole with the names of the newly baptized children. Photo by Joshua Irwandi/Indonesia

Since 2015 the Maryknoll missioner from Detroit has been mentoring a group of young Indonesian volunteers who dedicate their lives to the Asmat people. Andreas Wahyu and Rosa Dahlia oversee the youth groups. Frans Nay is a catechist. Ignas Bri and his wife Elsita conduct social development projects and Yeni Kristanti deals with health. To volunteer in Asmat requires the strength of steel. Over the decades many charity groups have come and left, giving up hope for the Asmat.

The history of the Papuans of Indonesia, of which the Asmat are a tiny fraction, has been about Indonesians trying to educate and modernize the lesser “tribe,” who lived in isolation with limited access to the outside world. Disenfranchised in their own land for decades, the Asmat now face losing their identity. The volunteers have joined Father Vince in helping the Asmat salvage their indigenous culture while adapting to modern life.

That is difficult for foreigners trying to introduce pastoral programs to people scraping by in a cashless economy. The volunteers look to Father Vince as their role model. 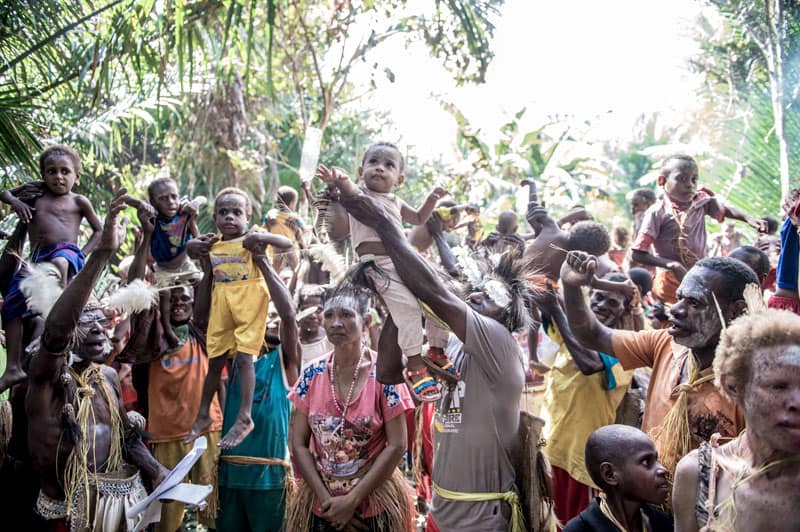 The Asmat people of Sa and Er villages lift their newly baptized children at the end of the jungle baptism ceremony. Photo by Joshua Irwandi/Indonesia

Rosa Dahlia recalls watching villagers going about their daily life when she had an important realization. “I used to think maybe they needed my help,” she says. “But at that moment, I thought, ‘Rosa, you’re the one who needs them!’

“I don’t think some of our early programs touched their hearts. It’s our programs, not necessarily something they need. So, what is it they want, something they cannot do but want to try doing? That may be a point I could support and facilitate.”

It took three years for Rosa and the other volunteers to see positive responses to the projects they initiated, such as encouraging harvesting crops from local gardens and producing and selling artwork of Asmat weavers and carvers. When an elderly woman in the village offered the use of her home for Rosa’s activities with women and girls, Rosa said, “For me, it was a door wide open.”

Health issues present a huge challenge. In February 2018, the Asmat stole international headlines when measles, diarrhea and malnutrition caused the death of more than 100 children in Asmat villages. Malaria poses a constant threat. Since 2011, cases of HIV have been reported. 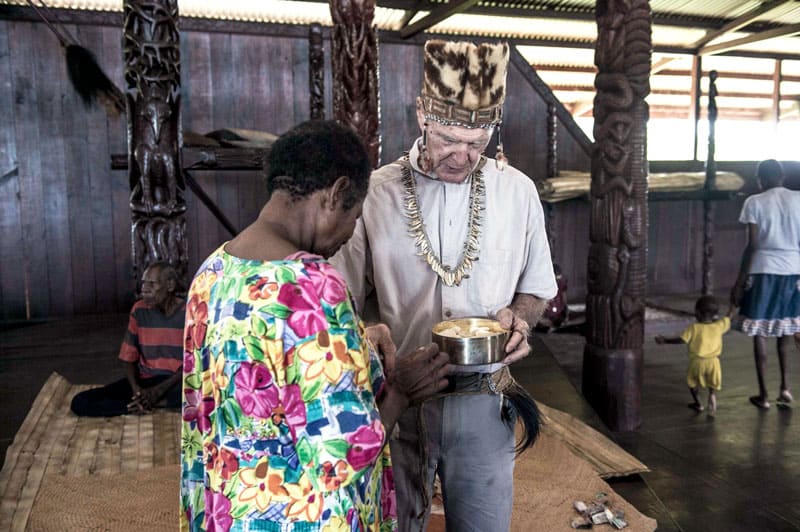 Recently Father Vince sent me a message telling me Paulinus Jok died of AIDS. Jok worked at the diocesan Justice and Peace office. He was a talented carver and helpful translator.

Yeni Kristanti is the volunteer tackling health issues. She is not a doctor, but a dedicated person whose life’s goal is helping people, especially necessary since there is no doctor within a 32-mile radius.

For Yeni, dealing with the HIV/AIDS pandemic is like putting together a puzzle in which new pieces keep coming out of the box. Yeni is always on the lookout for additional training and works with a village elder to raise awareness of HIV.

“The best prevention is if they are well-informed of the danger of HIV,” Yeni says. But HIV, she says, is not the biggest killer here. “There are more deaths related to hygiene, cleanliness, simple household matters, that really exacerbate every other life-threatening disease,” she says. “It’s unawareness that allows diseases to seep in.” 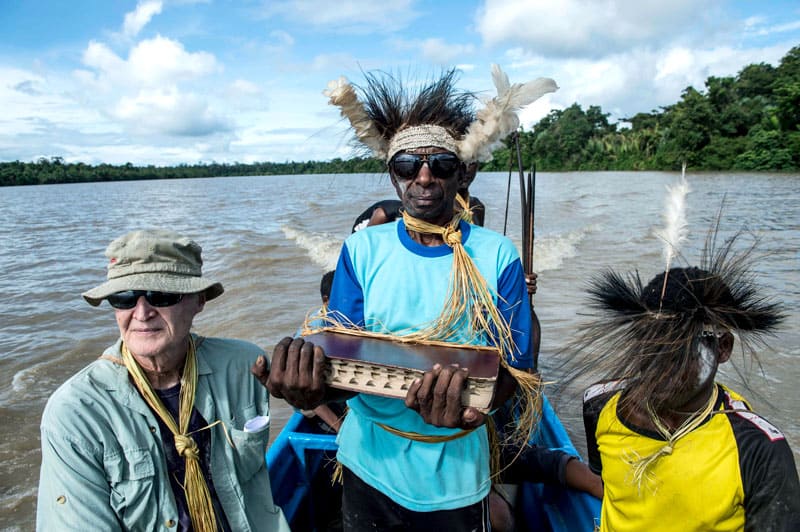 After baptism in the jungle, Asmat villagers accompany Father Cole on the boat trip to his home in the village of Er. Photo by Joshua Irwandi/Indonesia

Meanwhile, Father Vince continues his work along with the six volunteers. “Any positive visible change in Asmat is part of a long process that will take generations,” he says. “We have to realize we happen to be very close to the beginning of that process. Because of that, it is not realistic to either expect a lot of visible results or to measure our worth in Asmat based on that.”

“I know for a fact that Rosa is having a strong influence, even though it might not yet be clear to her,” he continues. “People see that she cares. Every day she’s out among them trying to learn, respecting them and their culture. They feel loved and respected and to me that is what they need most at this time in their history.”

Featured Image: Asmat people of Sa-Er carry Bible and a ritual mat into the jungle for a baptism that Father Vince Cole will conduct incorporating their Asmat symbols. Photo by Joshua Irwandi/Indonesia

Joshua Irwandi
Joshua Irwandi is an Indonesian photographer based in Jakarta and a former staff member of the Asmat Museum of Culture and Progress in West Papua. 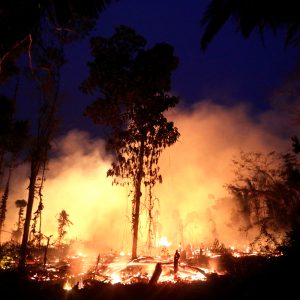 Assembly addresses key issues for Pope Francis: Care of creation and cry of the poor and the displaced || Poor people...