Maryknoll priest reflects on humanity’s quest
for something bigger, more powerful than ourselves

At noon every day, an office worker in New York City drops into the cool silence of Holy Cross Church on 42nd Street for Mass. Nine thousand miles away, Asmat fishermen offer prayers and fruits to the sea for a bountiful catch before setting sail. Meanwhile in the altiplano of Peru, a yatiri, or holy man (who got “ordained” by surviving a lightning strike) offers incantations, herbs and incense to heal a sick Aymara child of fever. The Luo of East Africa, while embracing Christianity, still take care to placate the spirits of their deceased relatives and ancestors to ensure harmony and blessings, and ward off misfortune.

From time immemorial, humans have searched for the sacred in the world and in their lives, for something bigger and more powerful than themselves and their individual existence. Anthropologists opine that such beliefs and practices were indicative of primitive, uneducated societies trying to overcome fear of the unknown. But the greatest civilizations (Egypt, Greece, Rome, Aztec, Inca, India, China, to name a few) all had strong religious underpinnings.

While modern Europe seems to be undergoing secularization—for many reasons—the United States still enjoys a robust religious and spiritual dimension. Indeed, New York City, arguably the most materialistic, financially powerful, ethnically diverse, culturally important, most educated and politically influential place on earth, is, at the same time, extremely religious, with more than 6,000 houses of worship.

These churches, synagogues, mosques and temples don’t include the countless other places people go to search for the sacred: the ocean-side, the forest, a mountaintop or starlit sky. Or attending a concert. Or helping at a soup kitchen. The most famous record of humans searching for the sacred is, of course, the Bible. Spanning millennia, its histories, myths, parables, psalms, prophesies, epistles and gospels run the gamut of emotions and experiences.

The Bible offers a veritable treasure trove of wisdom on where, what and who is sacred. Adam and Eve enjoyed the presence of God even after the Fall. Abraham and Sarah experienced the sacred while showing hospitality to strangers. Realizing he was standing on holy ground, Moses removed his shoes when he encountered the sacred in a burning bush on a mountaintop.

The people of Israel experienced God’s miraculous power to deliver them from slavery. Conversely, God resisted the human impulse to confine divinity in a man-made temple: “Thus says the Lord: The heavens are my throne, the earth, my footstool. What house can you build for me?” (Isaiah 66:1)
The greatest guide for searching for the sacred and encountering God in this world is contained in the Gospels. By celebrating the incarnation of God in Jesus, the Gospels invite us to search for the sacred in everyday and very human events.

What is more human than two pregnant women, Mary and Elizabeth, visiting one another? The Magi crossed borders, cultures and religions to find holiness in the form of a newborn baby in a lowly stable. The Samaritan woman, while drawing water in the heat of the day, instead quenched her soul’s thirst for the sacred in the life-giving words of a Jewish rabbi. And, of course, the most shocking of all, is to find the sacred nailed to a cross.

As missioners, our duty and joy is to accompany people on their quest for the sacred. We do this through our acts of charity and solidarity. As St. Mother Teresa said, “I give people an experience of God. After that, it’s up to them how they choose to worship.” People may be at different places in their journey toward the sacred. It is imperative to respect where they are and not belittle their beliefs or impose our own.

Many times we come to an appreciation of the sacred through them, their beliefs, prayers and rituals. As Maryknoll Father Vincent Cole, who lives among the Asmat people in the jungles of West Papua, Indonesia, said, “The pagan who prays to the wind may be closer to God than the Christian who does not pray.” 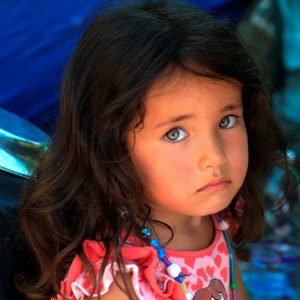