Jose Lopez was 7 years old when he came from Mexico to Los Angeles, Calif., with his family. He went to school and to Mass on Sundays with his mom. But everything changed when he turned 14 and got involved with gangs.

“There were a lot of gangs and I don’t know why it appealed to me to talk to them. I was silly,” Lopez remembered. Los Angeles has been nicknamed the “Gang Capital of America,” with an estimated 450 active gangs.

Lopez joined a gang. He started drinking alcohol and later a gang member gave him heroin. When Lopez was 17 years old, he dropped out of high school, left home and became a heroin addict.

“I was in the darkness, or rather spiritually dead,” he says. For 32 years, Lopez was in and out of rehabilitation centers and prison. Many times, he found himself living on the streets of Los Angeles.

“I ate from the trash cans. I used to pick up bottles from recycling bins of people’s houses to make some money to buy drugs,” says Lopez.

On July 19, 2007, he was arrested by the police for drug possession and that was the last time he used drugs. “I finally hit rock bottom. I got tired and I wanted to get out of the darkness,” he says. “I asked God to change me.” Lopez was sent to a rehabilitation center and to Narcotics Anonymous.

Then Lopez met his future wife, Maria, who invited him to come to the Church of Our Lady Queen of the Angels, known as La Placita, to volunteer. La Placita in downtown Los Angeles offers food and other services to homeless people. 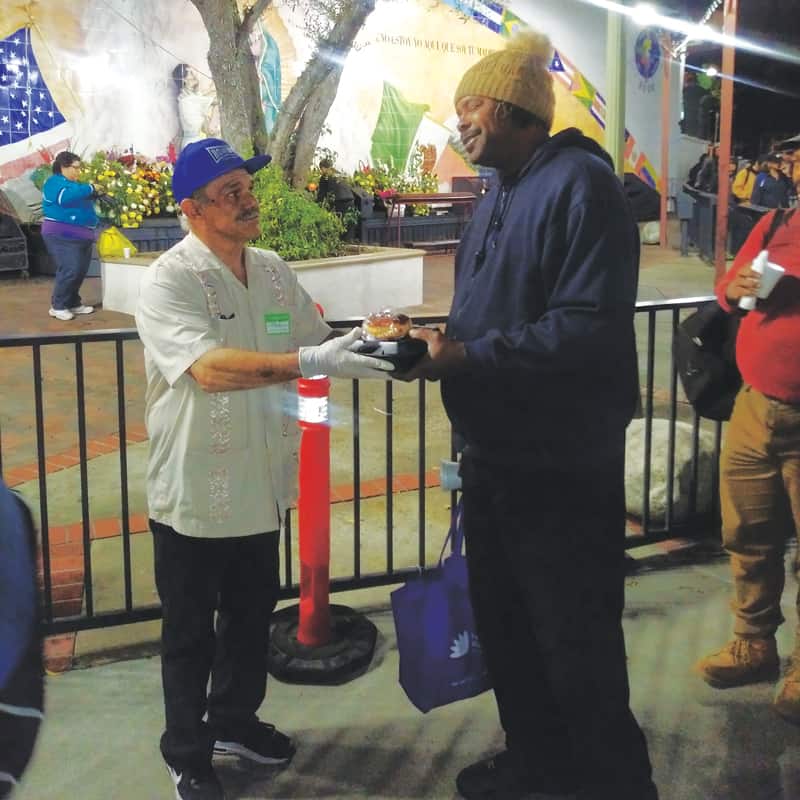 As a volunteer now, Jose Lopez (left) serves food to homeless people at the Church of Our Lady Queen of the Angels. (Lorena Zepeda/U.S)

Lopez has been volunteering there for over 10 years. “I know what homeless are going through. I feel their pain and suffering,” he says. “I do this to thank God.”

Lopez is in charge of the volunteers, who set up the tables, put out the food and serve dinner to the homeless.

This ministry was started by Father Luis Olivares 35 years ago in partnership with five other churches. They feed 250 to 300 homeless people every night.

A major cause of homelessness in big cities like Los Angeles is the rising cost of rent. A one-bedroom apartment can cost up to $2,000 a month.

In 2019, the Los Angeles Homeless Services Authority reported that there were close to 60,000 homeless people living in the county, with more than 36,000 of them in the city.

“For homeless, low-income, or immigrants and refugees, the only resource is the Church,” says Lorena Zepeda, director of the social services ministry. “They don’t have anywhere else to go. We take care of them.”

Other services the church offers include a food bank, a thrift shop and health services. Once a week, a nurse takes blood pressure, checks for diabetes and treats homeless people for minor injuries.

Zepeda says La Placita has enlisted the help of local services for the homeless. A social worker from the county comes to the church to explain what resources are available for them, including where to go for food stamps, how to apply for Medicare or Medicaid, and what other benefits the government has for them.

For Zepeda the Church’s mission is not only to offer services, but to have compassion for the homeless, who include people from all races and backgrounds suffering from problems ranging from addictions to mental illness. She recalls last Valentine’s Day, when Father Arturo Corral, the pastor of La Placita, took care of Terry, an elderly homeless man with mental illness, who was found near the church wet, shivering and ill with fever. 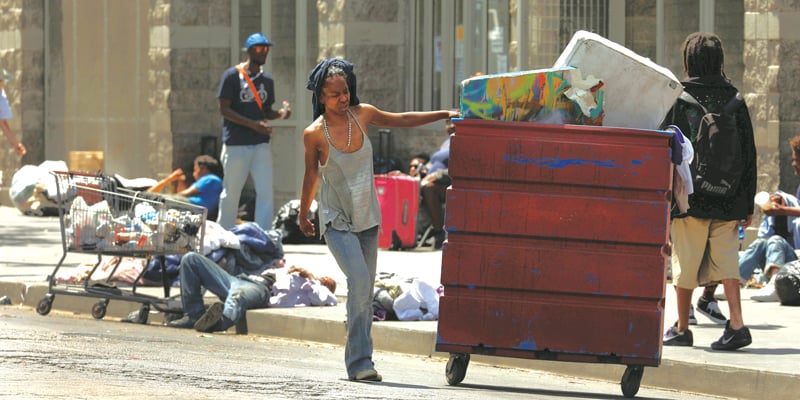 A woman (at left) pushes a cart with her belongings in downtown Los Angeles. (CNS/Patrick Fallon, Reuters)

“Father Corral changed him and cleaned him. We couldn’t find the key to get the blankets from the storage, but Father Corral went up to his room, brought his own blanket, covered him and called the ambulance,” she says. “It was a lesson for me.”

“We never had any issue with the homeless; they respect us,” Father Corral says. “To help them, we have to understand how to treat them.”

For the priest it is very important to collaborate with the city council to find possible solutions. For two years the church, with the help of the city, has been offering a space for the homeless to store their belongings during the day while they look for jobs and housing.

In the fall of 2016 the city’s Proposition HHH passed. It authorizes $1.2 billion to build approximately 10,000 units of housing for homeless and low-income people. Building the units is now in process across the city of Los Angeles.

“When I see people sleeping on the streets and around the church, it is heartbreaking, but I know God is with them,” Father Corral says. “They are not alone. There is a lot of help from the Church, the community, the city and county of Los Angeles.”

As for Jose Lopez, he is a eucharistic minister and has a full-time job, and he says he will continue serving the homeless. “I feel joy and peace in my heart, because I know this is my new plan,” he says. “I thank God for being here. It is a miracle to be alive.”
Featured Image: A homeless woman sits outside her tent in the Skid Row area of downtown Los Angeles. (CNS/Lucy Nicholson, Reuters) 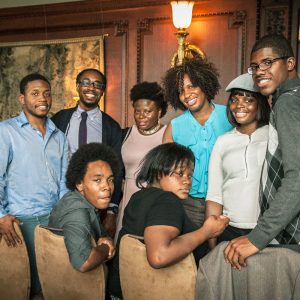