OXFORD, England (CNS) — Catholic aid agencies have urged the evacuation of Syrian war refugees from camps in Greece to “avert a catastrophe” from the coronavirus.

“More than 42,000 people are trapped in hopelessly overcrowded camps and horrific conditions—there is no hope of containing any outbreak,” Caritas Europe, Jesuit Refugees Service and more than 200 other organizations said in a March 24 appeal.

“Time is of the essence. We urge emergency action to guarantee the health and safety of the asylum-seekers, local population and humanitarian aid workers on the islands.”

The statement, addressed to heads of European Union institutions and Greek Prime Minister Kyriakos Mitsotakis, said recommended measures such as social distancing and frequent hand-washing were “simply impossible” in the camps. It urged EU leaders to ensure member-states continued accepting asylum-seekers. It added that it was “well within the EU’s capacity” to cope with the crisis, but said obligations to help were being “circumvented by illegal pushbacks.”

“We urge immediate evacuation of the refugee camps and hotspots on the Greek islands to avert a catastrophe,” said the appeal, co-signed by Protestant, Jewish and Muslim aid groups. 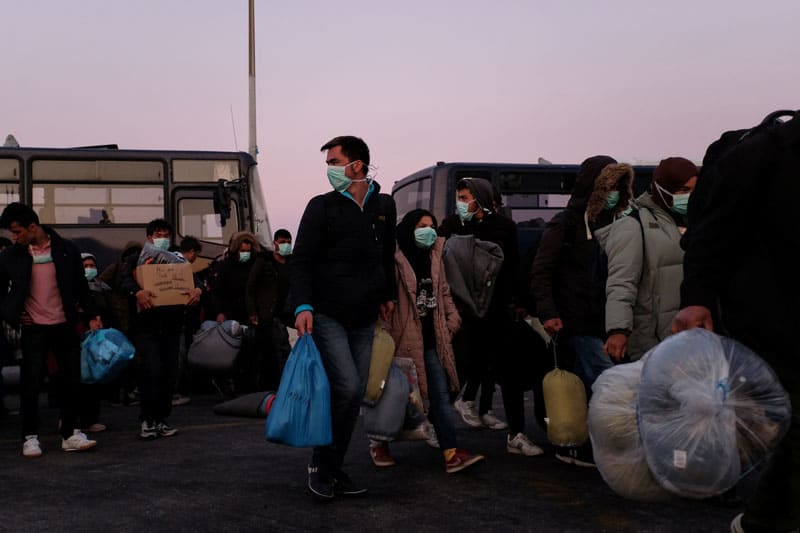 Migrants wearing protective face masks as a precaution against COVID-19 prepare to board a ferry to mainland Greece; they were at the port of Mytilene, on the island of Lesbos, March 20, 2020. (CNS photo/Elias Marcou, Reuters)

“We demand that the universal human right to seek and be granted asylum, as guaranteed by the European Charter of Fundamental Rights, be immediately restored and upheld. This includes accepting asylum applications and considering them in fair procedures, not punishing people who cross borders.”

Refugees from Syria began massing on the Greek-Turkish border in late February, after Turkey said it would allow their departure. The Mitsotakis government used riot police and tear gas to hold back arrivals.

The Greek government said March 1 it was suspending applications for refugees to come to the mainland, leaving thousands stranded on Lesbos, Samos and other islands close to Turkey’s coastline.

In a website message, Caritas Europe said the Moria camp on Lesbos currently had a single water tap for 1,300 people, with no toilets, electricity, medical care or education. It urged EU governments to give priority to relocating the camp’s unaccompanied children and most vulnerable.

Several European church leaders have also appealed for action, including Archbishop Stefan Hesse of Hamburg, the German church’s refugees commissioner, who told the Catholic news agency, KNA, March 20 that he regretted his country had also suspended its “humanitarian admission process.”

Cardinal Jean-Claude Hollerich, president of the Commission of the Bishops’ Conferences of the European Union, told Vatican Radio March 24 that many EU states were violating Christian values by “blocking their borders and making decisions only for their own people’s benefit without regard for others.” 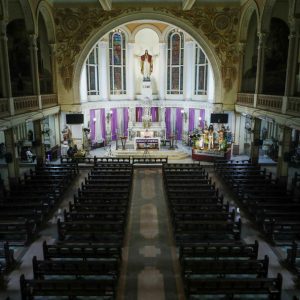 WEB-ONLY FEATURE: Future of pandemic will be determined by what happens to densely populated countries, WHO official says || MUDGEE,...

Mar 25, 2020
Copyright 2019 Maryknoll Fathers and Brothers. All Right Reserved.
Back to top