When Maryknoll Father Thomas Henehan visited his old neighborhood in Santiago, Chile, 15 years after leaving the country, he heard “Vecino Tomás!” He could not help but smile. “In Chile, the title of vecino (neighbor) is priceless,” he explains. “To be called neighbor meant that we had gained the people’s trust.”

This vecino remembered Father Henehan because of his solidarity during times of political oppression. Others remember him for his work empowering lay ministers in Santiago’s most impoverished areas. 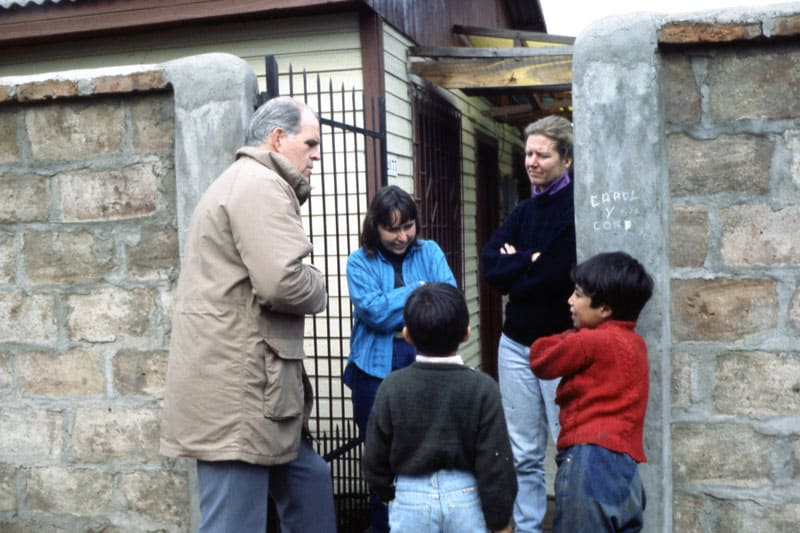 “We are called to act like the good Samaritan and respond to the needs of others,” says Father Henehan, who will celebrate 55 years as a priest this year. “To know they can be part of the mission of the Church, God’s mission, provides a sense of purpose.”

Even though Henehan grew up in a devout Catholic family in Chicago, discovering his mission came later. He was a dedicated three-sport athlete at Loyola Academy in Wilmette, Ill., and a linebacker and captain of the track team at the College of the Holy Cross in Worcester, Mass. The discipline and teamwork he learned during his athletic career prepared him for mission, he says.

During his senior year at Holy Cross, Henehan was intrigued by the witness of Maryknoll Father Edwin McDevitt, who served in Japan, and, suddenly, the young man felt drawn to the priesthood. He decided to miss a track meet to take Maryknoll seminary’s entrance exams. When asked about his player’s whereabouts, his coach said that Henehan “went to become a priest.” The announcement made the local news. The young athlete—whose post-graduation options had included law school, the air force or pro-football—had to quickly discern how to tell his parents, his girlfriend and his teammates of his new direction. He joined the Maryknoll Society after graduation. 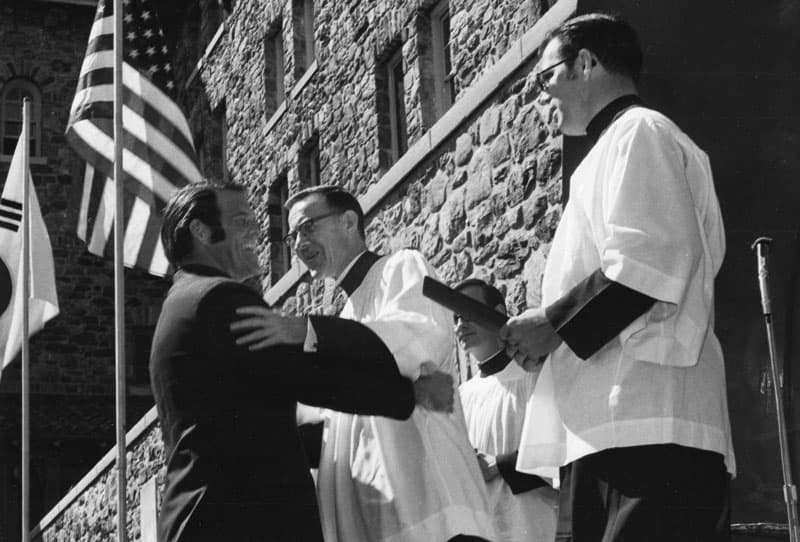 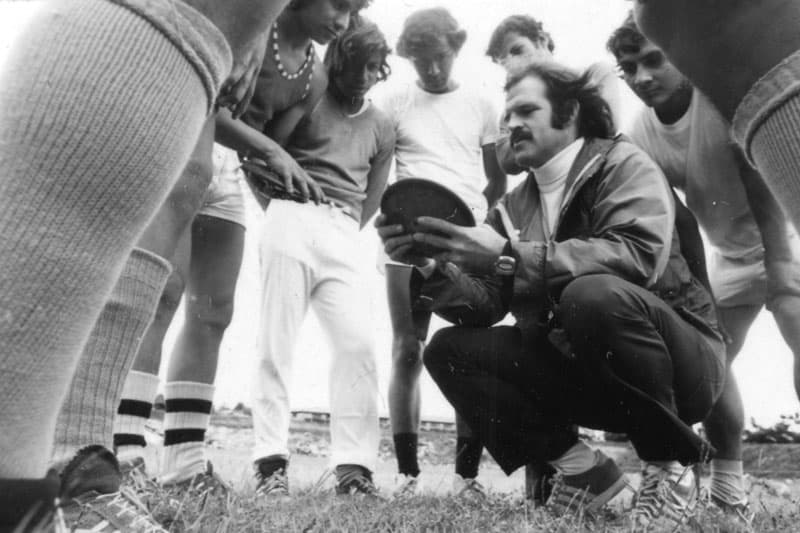 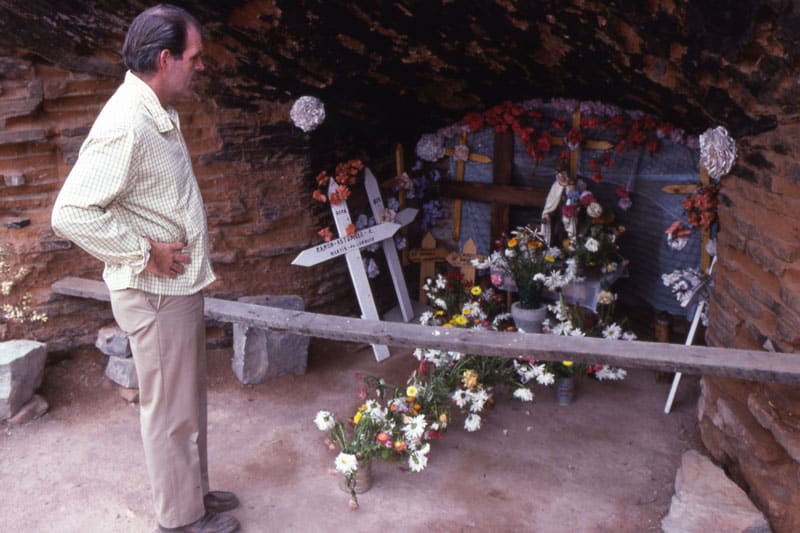 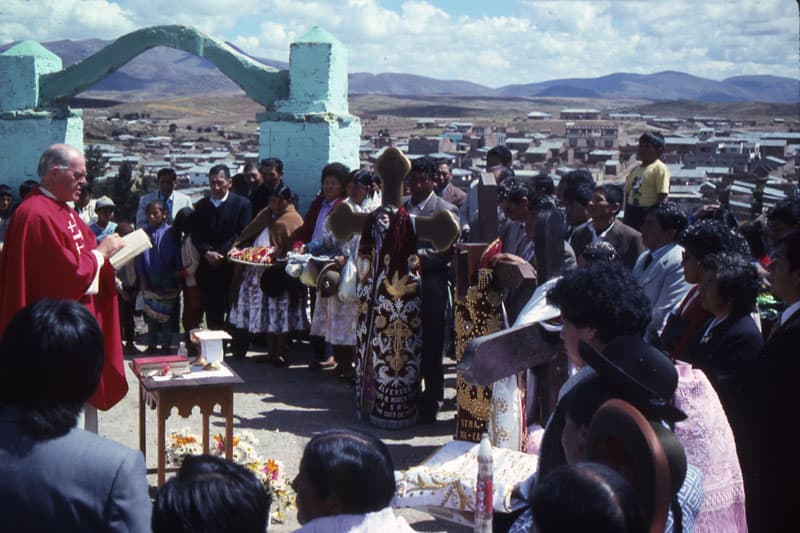 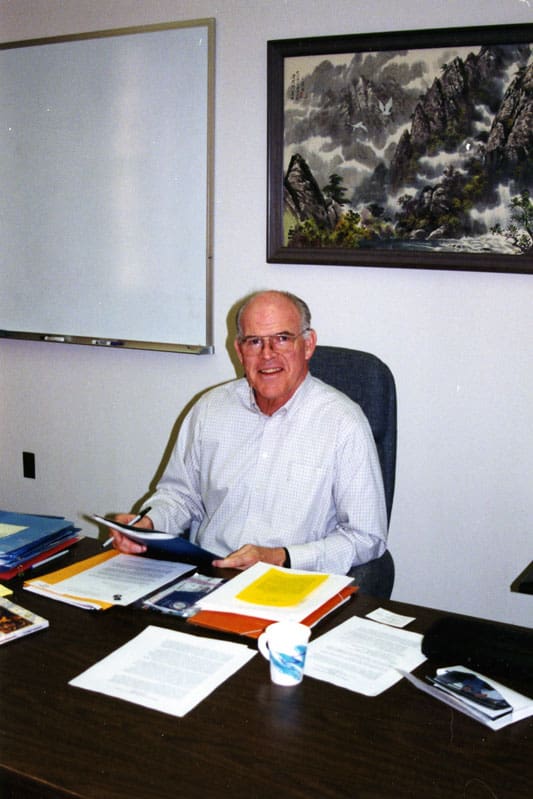 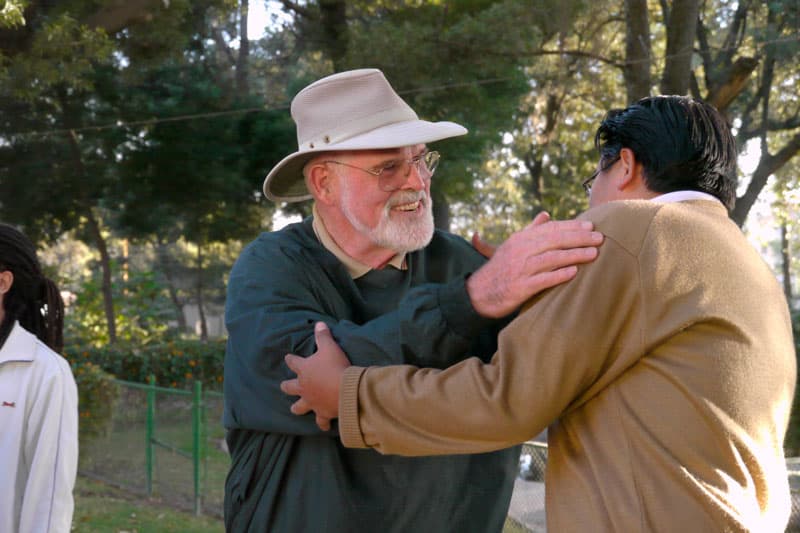 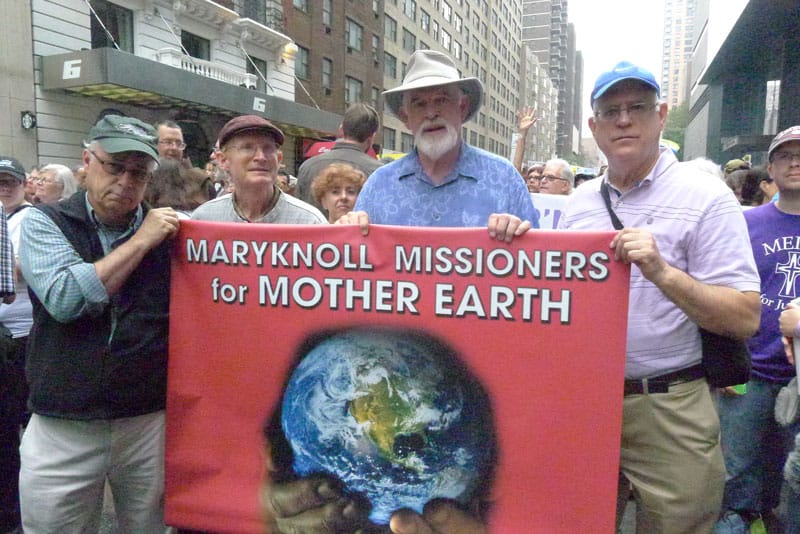 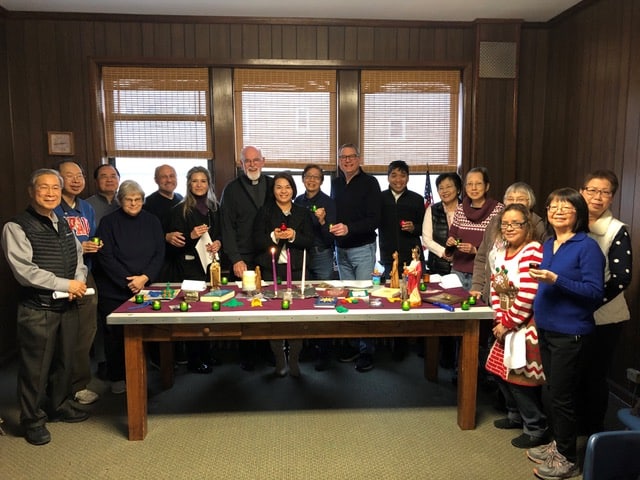 After his ordination in 1965, he did mission promotion and then served in Guatemala, coaching the national track team and establishing an archdiocesan youth center. In 1975, Maryknoll assigned him to a large parish in Santiago, Chile, which had over 150,000 parishioners and several small Christian communities. What they lacked in resources they made up for in dedication and giving spirit, he says.

“The bishop was installing 130 lay ministers a year,” says Father Henehan. Many lay people sought spiritual formation, he adds, so the bishop tasked the priest with establishing the Center for Pastoral Reflection.

The center helped train thousands of lay leaders to respond from a Christian perspective to problems such as unemployment, political repression and family crisis.

“I discovered another type of priest in them. A different kind of commitment and service,” wrote the late Alberto Cancino, one of four lay leaders working with the Maryknoll priests at the time. “Their witness challenged me … I feel more energy and self-worth to confront my commitment to the parish.” Later on, Cancino and other Maryknoll-trained lay leaders took over the center’s direction. 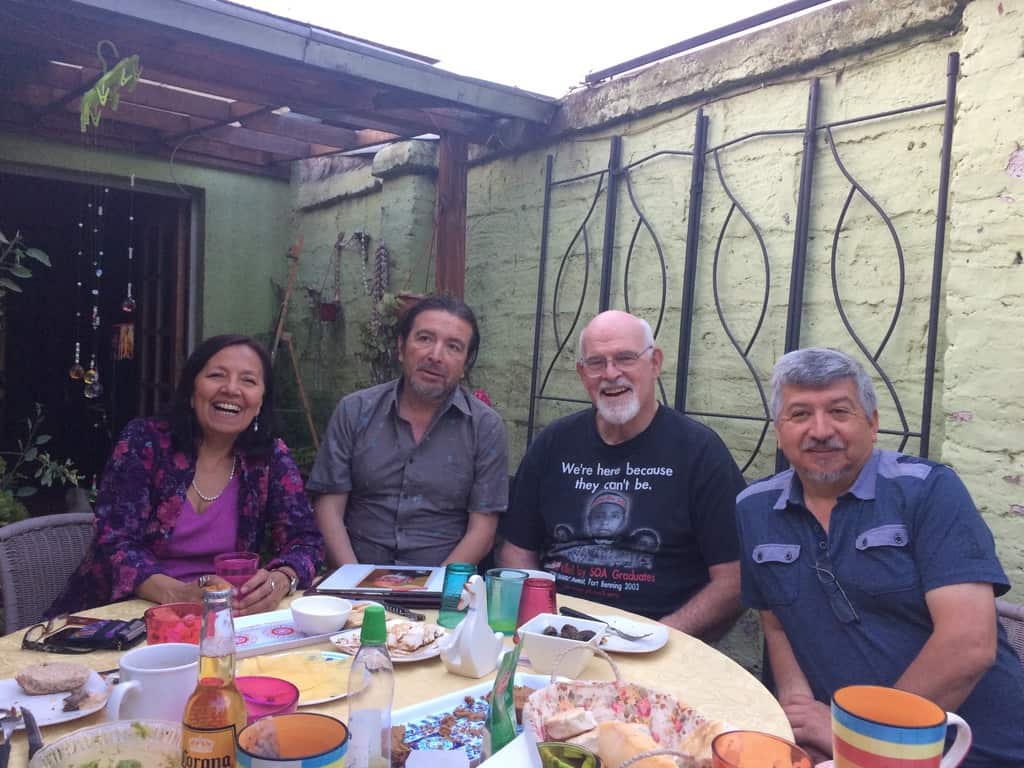 Meeting of members of the Pastoral Center team in Chile in 2018. In the photo, from left to right, Doris Muñoz, Alberto Cancino, Tomás Henehan, Tito Reyes.

Knowing themselves to be loved by God can inspire people to defend their rights, Father Henehan says. “You accompany people in such a way that they are empowered… They discover the power you have within you as a child of God.”

“Empowerment through accompaniment,” as he calls it, has been crucial during his 44 years as a missioner in Latin America. But empowering the laity was not easy during the dictatorship of Augusto Pinochet. “There was an environment of repression, of fear, of threats to the Church,” he says. “Women did not know if the police were going to stop their father or their sons. We experienced tremendous fear.”

During Pinochet’s 17-year regime, some 40,000 people suffered human rights violations and more than 3,000 of them were executed or disappeared, according to two national commissions. When civilians were targeted, priests and religious would go to the neighborhoods to pray and show them they were not alone, Father Henehan recalls. “To accompany the people is essential,” he says.

Being “a Church of the poor for the poor” was seen as suspect then. But “God is not separated from reality,” Father Henehan explains. “If it is a reality of poverty, violence, injustice and discrimination, the theology must reflect finding God incarnated to defeat those sins.”

The government retaliated against those supporting the people’s call for democracy and peace. Father Henehan’s small house was raided four times. In 1986, after an attempt on Pinochet’s life, the government encircled the poorest areas of Santiago and arrested 40 people, including Father Henehan and another Maryknoll priest. The government ransacked their house and falsely accused them of distributing political material. The detained Maryknollers were released eight hours later, but their Chilean permanent residency was revoked. Nonetheless, the Maryknollers continued their pastoral work using temporary visas, gaining the credibility of the people. They lived on edge until democracy was restored in 1990.

In 1996, Father Henehan was elected to the Maryknoll Society’s General Council in New York, where he served until 2002. Afterward, he brought his educational experience to the Maryknoll Mission Center in Latin America (known as CMMAL) in Cochabamba, Bolivia. He helped direct the Latin American Office for Mission Services, publishing materials to train missioners in the region. He also helped develop programs at the grassroots, national and international levels. The Latin American bishops, as well as members of the Maryknoll family, sent their leaders to Bolivia for missionary formation.

Father Henehan’s mentee Cancino also went to Bolivia and helped develop formation programs that emphasized “learning by doing.” These programs informed future educational tools, the missioner says. He adds that Cancino illustrates how accompanying people in their Christian development yields fruit. “I learned more from my student than I could have imagined,” he says. 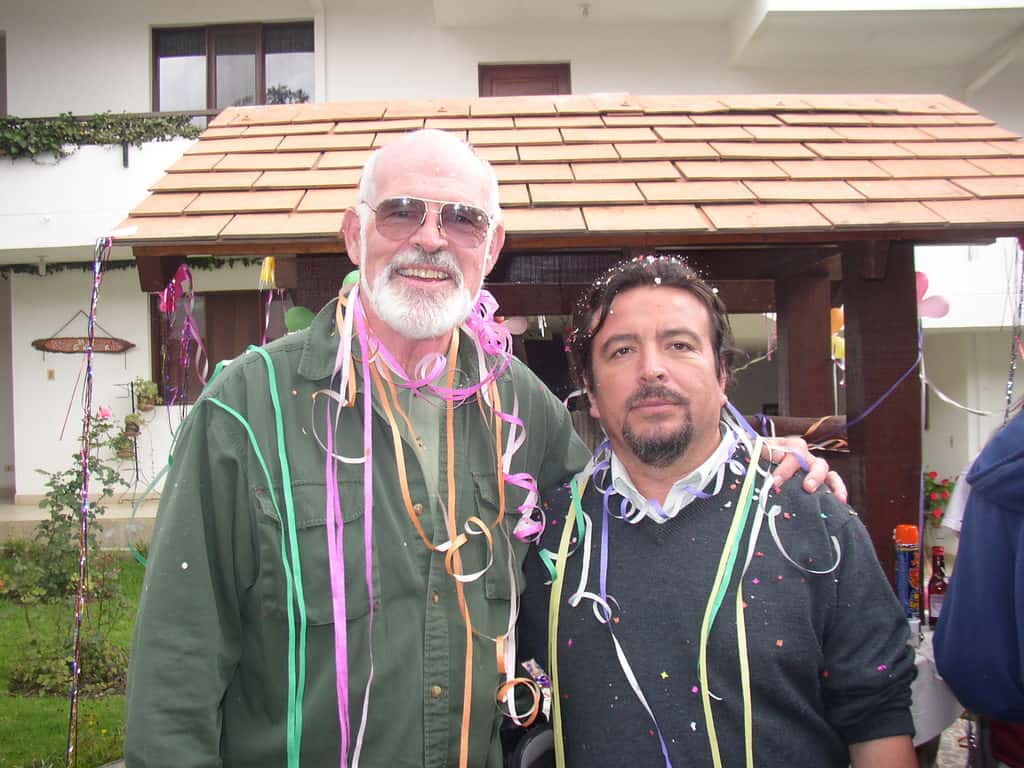 The pedagogue Alberto Cancino and Father Henehan celebrate during the closing of the missionary formation program that Cancino had facilitated in CMMAL, Bolivia, in 2006. (Photo courtesy of Thomas Henehan, M.M./Bolivia)

When Maryknoll employees who visited Cochabamba challenged CMMAL to create a program for the growing population of Hispanics in the United States, Father Henehan accepted the challenge.

He reached out to pastoral organizations and mission offices to learn about the community’s realities. He later partnered with Hispanic Pastoral Institute Fe y Vida, based in California, to develop a four-year mission formation program. “Sixty percent of all Catholic youth (younger than 18) in the U.S. are Hispanic,” Father Henehan says, citing a statistic from the U.S. bishops’ Secretariat on Diversity in the Church. “We have to be conscious of their responsibility as a missionary church.” 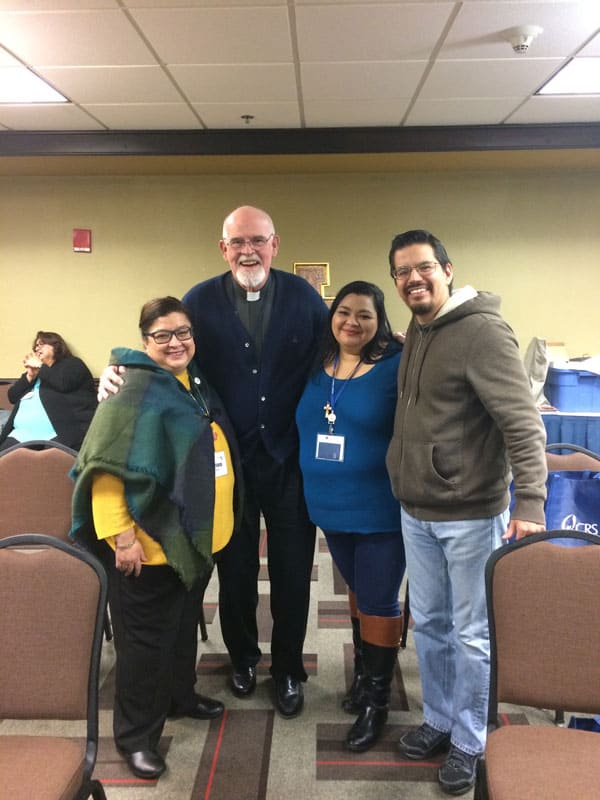 As part of the Maryknoll Hispanic Outreach team (known as Discípulos Misioneros Maryknoll or DMM), Father Henehan has helped develop bilingual programs that encourage people to discover their baptismal call to mission. (Learn more at misionerosmaryknoll.org)

Father Henehan moved back to his native Chicago in 2015. Mission continues for the 81-year-old priest. His life now includes occasionally assisting at 10 parishes, leading retreats and mission formation workshops, training catechists and visiting former classmates in the hospital.

“Father is always ready to help,” says Maria Erazo, a religious education coordinator in Chicago. Inspired by the priest, Erazo attended Maryknoll training workshops in Chicago, New York and Guatemala, which rekindled her commitment to share God’s love in her daily life.

“We talk about needing to be agents of hope,” Father Henehan says. “Mission is a commitment to be an agent of transformation in a world that desperately needs hope and abundant life for all, not just for a small minority.”

Pope Shares His 'Dreams' for Amazon Region, Its Catholic Community

‘God’s Love Has no Borders’ 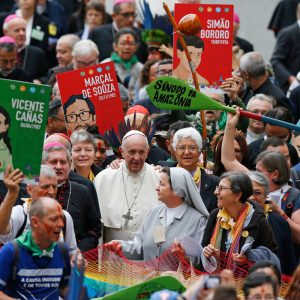 Pope Shares His 'Dreams' for Amazon Region, Its Catholic Community