The Year of Departures

Amid COVID-19, looking back at how the 1918 influenza pandemic impacted the fledgling Maryknoll Society

No vaccine. No antibiotics for treatment. Worldwide control efforts including isolation, quarantine, good personal hygiene, use of disinfectants and limitations of public gatherings.

These words, so resonant today in the midst of the COVID-19 pandemic, were used by the Centers for Disease Control and Prevention to describe the influenza pandemic that ravaged the world more than a century ago. According to the CDC, an estimated 500 million people worldwide, about one-third of the population at the time, were infected. At least 50 million people died, 675,000 of them in the United States.

As the flu pandemic raged, the Catholic Foreign Mission Society of America sent its first departure group of missioners to China, on Sept.7, 1918.

That departure came at the beginning of the second and deadliest wave of flu in the United States. In October alone, an estimated 195,000 Americans died.

How influenza touched the mission society is recorded in its publication, The Field Afar, which later became Maryknoll magazine.

According to those accounts, the first wave of flu in the spring of 1918 almost passed over the Maryknoll Society entirely, but for one priest who contracted the virus on a mission promotion visit to New Jersey. He was nursed back to health by Franciscan Sisters at St. Michael’s Hospital in Newark and sent home to Maryknoll.

The second wave, in the fall of 1918, was not as kind, as 27 cases of flu, one-third of the Society’s membership, were reported at “Mary’s Knoll” in New York. All recovered.

The third wave, arriving in the winter of 1918-1919, finally brought death to the Society’s door.

The first to succumb was Richard Fitzgerald, of Albany, N.Y., a student at the Venard, Maryknoll’s junior seminary in Clarks Summit, Pa. He died on Feb. 23, 1919, at Mercy Hospital in Scranton. The April 1919 Field Afar said: “Fortified with all the sacraments, Dick uncomplainingly resigned himself to the will of God, cheerfully making the complete oblation of his life for foreign missions.” 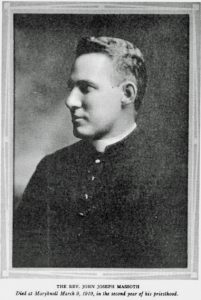 The same issue of the magazine also reported that, “Father Massoth, one of the Venard faculty, showed symptoms of the fever while in New York and was hurried to Maryknoll, where every possible care was given, but after a strong fight for life, the young priest, fortified by the sacraments, expired on Sunday, March 9.”

John J. Massoth, a native of Piqua, Kansas, was ordained at Maryknoll on June 2, 1917. He was described in The Field Afar as “large in stature … and large in heart.” The Field Afar noted that the day after his death, “a funeral Mass was sung…in the Seminary chapel, where Father Massoth had received his early orders… [and] offered his first Mass.”

The Society knew that the effects of influenza on its membership was a microcosm of the effects on its supporters, benefactors and the U.S. population at large. The Field Afar provided this reflection on those painful times: “Those were dark days, such as we know many of our readers have recently passed through, but God was good and we are thankful. Those who were stricken on the Knoll, all, through God’s mercy, were preserved.”

At the Venard, as the school year closed in the spring of 1919, without Father Massoth and Richard Fitzgerald, a fitting moniker was applied to the year past. “The Year of Departures, we are beginning to call it, this scholastic year that we are now closing at the Venard–departures for China, our earthly destination, and for heaven, our eternal abode.”

Letter from Camp in South Sudan 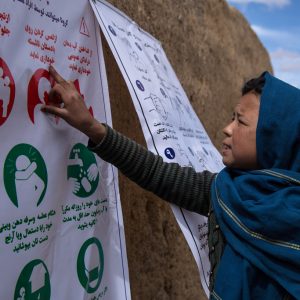 Apr 22, 2020
Copyright 2020 Maryknoll Fathers and Brothers. All Right Reserved.
Back to top