For many countries in Africa, the steps to mitigate the COVID-19 pandemic are exacerbating already dire circumstances, and warnings are mounting of a double tragedy: disease and starvation.

Even as coronavirus preventative measures begin to ease in some developed countries hit earlier in the pandemic, the virus appears to be on the rise in Africa, according to the World Health Organization. And David Beasley, head of the U.N.’s World Food Program said recently the world is on the “brink of a hunger pandemic” and “a global humanitarian catastrophe.”

“That means 135 million people on earth are marching towards the brink of starvation,” he said, adding that number could nearly double by the end of 2020. “That’s a total of 265 million people.”

The worst impact could be in countries across Africa, as well as the Middle East, Beasley told the U.N. General Assembly in late April, singling out South Sudan and others in particular.

For Maryknoll missioners working in South Sudan and other East African nations, specifically Kenya, Uganda and Tanzania, helping those facing the threat of starvation is already a reality as these countries have shut down their economies, halted public transportation and ordered people to stay home. For millions of East Africans who eat only on days they can work, hunger is a daily problem that has become a crisis.

“Hunger is rising to the level of starvation,” says Maryknoll Father John Barth, who works in northern Uganda and South Sudan. “Half the workers in East Africa are in the informal labor market, and what they don’t earn today, they don’t eat today.” 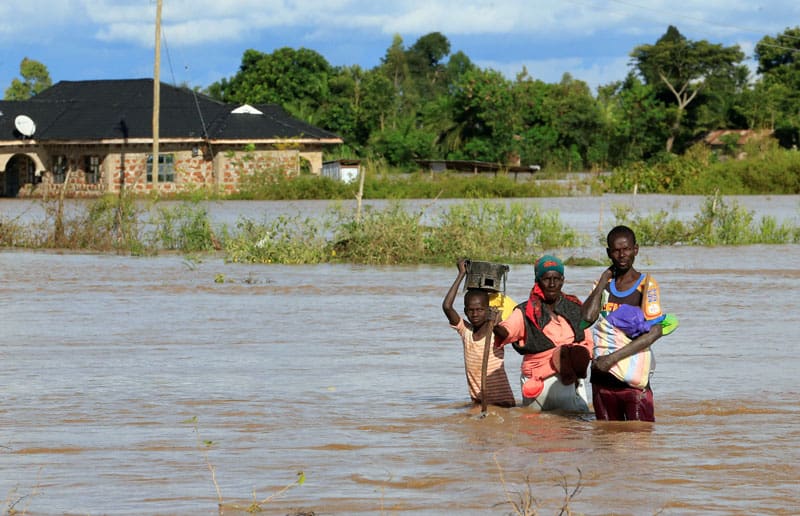 Residents wade through floodwaters in Budalangi, Kenya, May 3, 2020. At least 100 are dead and thousands homeless after heavy rains and thunderstorms led to severe flooding and landslides across Kenya. (CNS photo/Thomas Mukoya, Reuters)

As much as 60 percent of the East African workforce is in what is known as the informal labor force, Father Barth says, meaning they don’t have regular jobs and subsist by selling things on the streets or providing labor or services. With the governments of East Africa, as elsewhere, shutting down everything but essential services, these informal workers are left destitute and hungry.

“These people who were living hand to mouth literally don’t have a chance to make the money they need to pay for today’s food,” Father Barth says.

The situation is compounded by the shutdown of transportation, which not only keeps people from traveling to work if they have it, but is preventing people who are sick or who have pre-existing health conditions, such as HIV/AIDS or Hepatitis C, from getting to a clinic or hospital for their lifesaving medication, he says.

For many people in Africa, the threat of hunger, malnutrition and starvation and the loss of access to critical medical treatment are more urgent than the threat of the COVID-19 infection, which has not yet reached the rural areas or smaller cities, Father Barth says.

Countries on the African continent have reported more than 52,000 cases of COVID-19, with slightly more than 2,000 deaths, as of May 6, 2020, mostly in northern Africa, West Africa and South Africa, according to the Africa Centres for Disease Control and Prevention (Africa CDC), part of the African Union. Far fewer cases are reported in East Africa so far.

In Kenya, where a melee occurred over food distribution early in April in the massive shantytown of Kibera, Maryknoll Father Lance Nadeau is working to get food to parishes in several parts of the country, as well as helping families in the in the capital of Nairobi, where he lives.

In the town of Kibwezi in southeastern Kenya, for example, the Maryknoll Fathers and Brothers, through Father Nadeau’s efforts, were able to give food assistance to almost 700 families, consisting of more than 5,000 people. Working from a distance via electronic fund transfers, Father Nadeau was able similarly to help parishes in western Kenya and in northern Kenya near the border with Ethiopia. 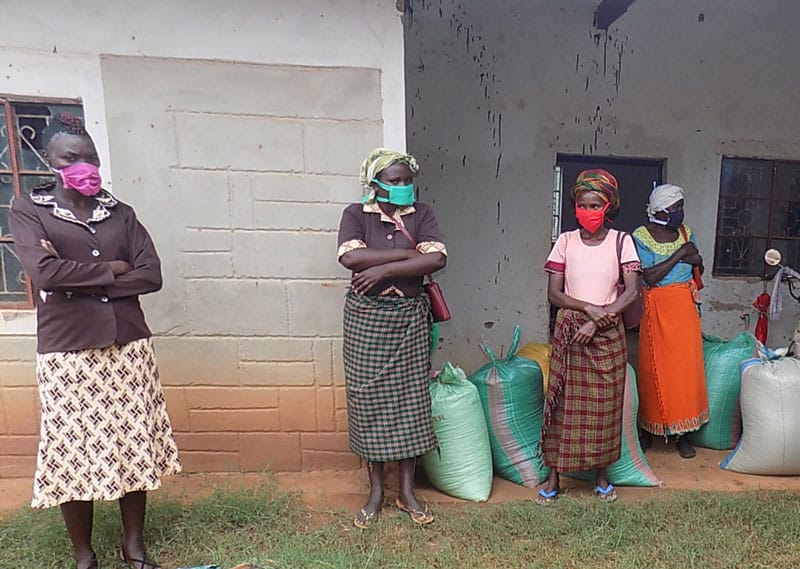 At a parish outstation in Kenya women in protective masks await food distribution supported by the Maryknoll Fathers and Brothers. Many people in Kenya face food shortage and possible starvation as the country shut down in response to the COVID-19 pandemic. (Photo courtesy of Lance Nadeau/Kenya)

To avoid situations such as occurred in Kibera, Father Nadeau works with parishes, women’s groups and local governments and police to ensure orderly and fair distribution of food aid.

“Over the years, I have developed some good working relationships with local clergy and laity,” he says. “Local people know the local situation best. They are able to find the most needy in the area and food suppliers with reasonable prices.”

He says women in both church and civil groups are particularly helpful in food distribution. “Women are concerned about their families and aware of the neediest in the local community,” he says.

“In the past, Maryknoll has offered food assistance through work programs organized by the local parishes,” Father Nadeau says. “Because of the coronavirus, such group efforts have been suspended. But the relationships and community spirit built up through these social welfare projects still serve as the network through which information about need and assistance is passed.”

Similarly, Maryknoll Father Joseph Healey, whose ministry is working with small Christian communities in Nairobi, has switched from physical prayer and reflection meetings to virtual ones using programs like Zoom, WhatsApp and Skype, and those are now his platforms to help in the pandemic shutdown.

“We’ve been trying to listen to what are the felt needs of the people and we’ve been doing that through social media networking,” Father Healey says. The small Christian communities provide a network to identify the most needy in the parishes where the communities are located, he says.

The number one need is food, followed by soap and water to maintain good sanitation, he says. In addition, two natural disasters have pummeled Kenya recently—flooding and locusts.

“There’s heavy rains in parts of Kenya and people through mudslides and landslides are losing their homes,” he says. “The other is the locust invasion. Whole areas of Kenya are now being eaten up by locust invasions.” 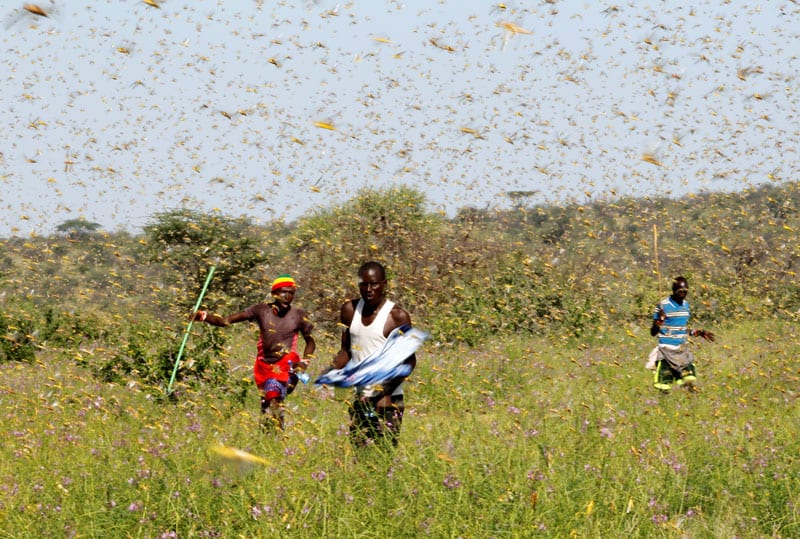 Men fend off a swarm of desert locusts in Samburu, Kenya,, Jan. 17, 2020. Local Catholic priests and villagers say the hatching insects mean new and locally bred swarms, something that must be avoided.(CNS photo/Njeri Mwangi, Reuters)

Father Barth, who works in the Palabek Refugee Settlement in northern Uganda, says that even in the U.N.-run settlement, where the COVID-19 infection has not yet been detected, food scarcity is an issue, and the World Food Program recently cut the monthly food ration by 30 percent.

“It was already low,” he says. The grain allotment per person is the equivalent, he says, of a bowl of cornflakes three times a day. Protein comes from beans and amounts to a little more than 2.1 kilos a month, or 4.6 pounds, per person.

“On top of all this, the UNHCR (United Nations High Commissioner for Refugees) has told us in the camp just recently, there may be another 15 percent cut in the ration of the food by the month of June,” he says.

In addition to working in the refugee settlement of 30,000 people, most of whom fled South Sudan’s recent civil war, Father Barth returns once a month to the parish in South Sudan where he previously lived, bringing food and fuel. Now, however, he can only accompany the supply truck to the border, where he must wait until the vehicle returns from the parish, because only essential workers such as truck drivers are allowed over the border.

Father Barth says that while sparsely populated areas such as northern Uganda and neighboring South Sudan may be some of the last places in Sub-Saharan Africa to have a significant impact from the coronavirus, such areas may suffer tremendously in the future because of the diversion of resources to fight the pandemic.

“There is a potential to reverse progress in infant and child mortality by impairing access to medical care in poorer countries,” he says. “There’s a fear that as the virus evolves here, it’s going to draw down the resources that are already few and far between in Sub-Saharan Africa.” 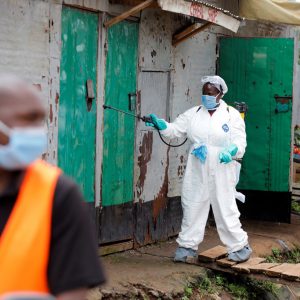 A Maryknoll lay missioner, who worked in East Africa, analyzes the region's response to COVID-19 || By Susan Nagele, MKLM East...

May 8, 2020
Copyright 2020 Maryknoll Fathers and Brothers. All Right Reserved.
Back to top