Spirit of Mission / May 1, 2020
ShareTweet it!LinkedinEmailPrint

Just before starting Mass for the solemnity of Mary, Mother of God (a.k.a. New Year’s Day), I gave the altar server in charge of incense a quick refresher course on how to swing the thurible correctly to produce the desired number of “clicks”: three times for the Blessed Sacrament; two for the Book of the Gospels, Pascal candle and clergy and one for the congregation. Without missing a beat, the acolyte said, “So the clicks are part of the aesthetic?”

I was stunned—and impressed—not just by such an astute observation coming from a high school student, but from a girl no less. Don’t get me wrong. It’s not that a girl made the comment, but in certain quarters even now having female altar servers is debated and scorned, if not banned. Yet there she was, a high school girl, reminding me, a priest of more than 40 years, of the multilayered beauty of our Catholic traditions.

The Roman Catholic Church continues to struggle with the role of women, even though the vast majority of church goers and workers (teachers, volunteers, office help) are women. And women remain the backbone of most parish and religious ed programs.

But as that brief exchange with the girl altar server underscored, women’s insights into life as well as liturgy are seldom sought, much less expected, yet they are not only valuable but also vital.

The Bible attests to the noble role women played at critical moments throughout salvation history. Ruth, the Moabite, after being widowed, remained loyal to her mother-in-law Naomi, an Israelite. Ruth went on to become one of Jesus’ ancestors. Queen Esther risked her life to intercede for the Jews who had been targeted with extermination.

And, of course, Mary, the teenager, changed the course of history by agreeing to be the mother of the Messiah. Jesus respected and interacted with women. Women financially supported his and the Apostles’ ministry. Mary and Martha were his friends.

Recently, Pope Francis sought to restore the unjustifiably damaged reputation of Mary Magdalene by raising her to the rank of Apostle for her witness to the Resurrection. Bible scholars agree that she was not the woman taken in adultery. Actually, her situation was worse.

The Gospel of Mark points out that Jesus had exorcised Mary Magdalene of seven demons. Yet she, a previously possessed woman, was the first person to encounter the risen Jesus, the first person to attest to the central tenet of Christianity—a fact too embarrassing to fabricate.

Catholic saints offer a variety of examples of ways in which women have enriched the faith.

From Joan of Arc, who freed France from English rule, to Julian of Norwich, the first English woman to ever publish a book, the bravery and wisdom of women have ennobled our Catholic heritage. Catherine of Siena and Bridget of Sweden persuaded Pope Gregory XI to desert the luxury of Avignon and get back to Rome. In modern times Dorothy Day and Flannery O’Connor, both lay women, put their writing talents and Catholic insights into print.

In my personal life, my mother, aunts, sister and niece (not to mention female co-workers) have all given me examples of faith, service and selflessness without which my understanding of God would have remained one-dimensional and myopic, that is, limited to my male perspective.

So the faith and witness of women is out there and available to all who seek it, find it and are honest and open enough to appreciate it. Yet until those in decision-making roles in the Church find more ways to emphasize, encourage and empower women, the Church will continue to stumble through life with one arm tied behind its back.

Half the Catholic population deserves to know what the other half thinks about faith. The wisdom of women is too valuable to ignore.

Featured Image: An altar server processes toward the sanctuary at the start of the annual Black History Month Mass at St. Patrick’s Cathedral in New York City. (CNS, Gregory A. Shemitz/U.S.) 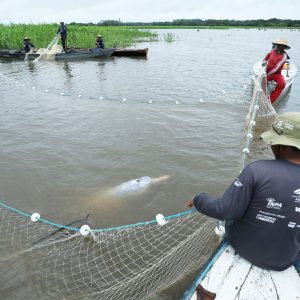 In his new exhortation, Querida Amazonia, Pope Francis describes his "great dreams" for the Amazon region || In February,...