When Maryknoll Father Joseph Thaler started helping workers in the brick factories outside of Kathmandu, the capital of Nepal, young women were regularly being lured out of the brickyards and trafficked into the sex trade in neighboring India.

“Nepal is a country where a lot of women, and even young boys, have been trafficked out of the country,” the missioner says. “There are many different reasons why that would happen. The biggest thing is because of poverty.”

Arati Basnet, who directs CDO-Nepal, an organization she started with Father Thaler to help laborers in the brickworks, says naïve young women from the countryside are easy prey for traffickers. These men profess to love the women and offer to marry them and take them away from the harsh life and grinding work of making and carrying bricks. “So they get married and after a month they just sell them,” she says.

“They are sold,” says Father Thaler, explaining the women are seduced, used and then sold to brothels. “There are estimates of probably more than 250,000 Nepalese girls who ended up in India and other places involved in prostitution.”

Since CDO-Nepal began working, trafficking of women out of those particular brick factories has largely stopped, says Basnet, who strives to educate women to the dangers and convince factory managers to keep traffickers out of the brickyards.

Yet, across Nepal human trafficking continues. “Somebody can go through a village and say, ‘Look, I’ve got jobs in Kathmandu,’ ” Father Thaler says. “Next thing you know, they’re across the border in India, and then they’re gone.”

Despite the efforts of CDO-Nepal and other organizations to stop human trafficking in Nepal, the missioner says, “There’s a long way to go.” 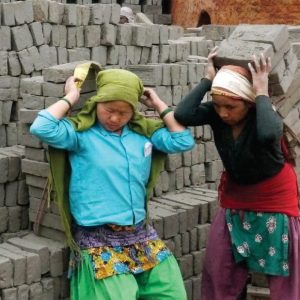 || By Lynn F. Monahan A Maryknoll priest helps bring healthcare and education to Nepal’s brickworks Kathmandu is a city...

Mar 2, 2014
Copyright 2019 Maryknoll Fathers and Brothers. All Right Reserved.
Back to top