Leung Ying, who was partially disabled after a stroke, came to live in our home for the elderly in Hong Kong, where I served in mission. She appeared very sad and would walk up and down, dragging one foot a little and weeping. She continually repeated the same thing, but no one could understand her and nothing we said or did seemed to cheer her up.

One day a visitor discovered she was repeating, “I have 18 daughters. They all went away, but I didn’t go.” We three Sisters who ran the home decided to give her special “tender loving care.”

Each time we saw her we would praise her and give her a big hug. We did this for months with no response. Then, one day after about a year, I gave her a hug and to my delight, she put her arms around me and gave me a tentative hug. What a breakthrough! After that, she would come around to us many times a day for a hug, a kiss, a cookie or two and a sip of coffee. She stopped crying and became a favorite among the staff, bringing lots of laughter and fun to us.

When she died, several women showed up at the funeral and told us they were Leung Ying’s “adopted daughters” and she had been very good to them years ago. When I remember Leung Ying, I recall the words of St. John of the Cross: “Where there is no love, put love and you will find love.”

Our men’s Bible study group in Venezuela had gotten mired into a complaining session about the Church. Several of the men said the bishops just didn’t care about the poor. The cardinal of Caracas had been our bishop in Valencia a few years earlier and I knew him to be humble and caring. So I said: “Why not invite Cardinal José Lebrún Moratinos to visit the barrio?” They scoffed, believing he would never come, but I assured them that if they invited him, he would come. And he did.

Cardinal Lebrún spent the day visiting one of the poorest sections of the city and walked up some very steep hills. The people gave him the only stable chair in the neighborhood and he sat, listened and led them in prayer. When I drove him back to his residence in the evening, he said: “I am very tired, but this has been a great day for me.”

Welcoming new Catholics into the faith is one of the most joyful moments in our missionary work in Japan. During my first Lenten season working in the Tsu Parish, I had the privilege of welcoming and blessing a very elderly Japanese couple who were to be baptized at Easter. Part of the rite included the couple professing the creed. As they began, they spoke so softly that hardly anyone could hear them. But their Catholic daughter standing next to them joined in. Slowly one by one everyone in the church joined in and suddenly everyone was professing the creed with such conviction that it could be heard far away.
I was so moved by their sense of Christian solidarity.

While serving in Tanzania as a Maryknoll lay missioner, I helped a young teacher, Martha, complete her student visa application so she could go to graduate school in the United States. Although Martha has two young boys and a husband, she was willing to make the sacrifice of separating from them temporarily in hopes that her master’s degree would pay off in a better job later. After she left for the States, I stayed in touch with her husband and children and invited them to my house so we could talk with Martha via computer connection. At home they have neither electricity nor indoor plumbing so they would come regularly on Saturdays for chats via the Internet.

One Saturday when the boys asked to go to the outhouse, I said they could use my bathroom and showed them where it was. A few minutes later, as I was driving them home, the boys asked to make a stop. Apparently my Western toilet had been as scary to them as the African squatting toilet is to me. 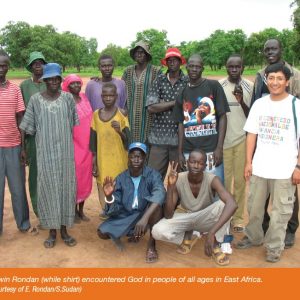 Jan 2, 2014
Copyright 2020 Maryknoll Fathers and Brothers. All Right Reserved.
Back to top