When I served as a Maryknoll Sister in El Salvador from 1997 to 2005, I helped get documentation from Salvadorans who had known or met Archbishop Oscar Romero to support his canonization process. To listen to their stories and encourage Salvadorans to write down their experiences was so important, and for them to proudly sign their letters, knowing they would be sent to the Vatican, was overwhelming for all of us. The Salvadorans wrote from the heart because, in their faith and love and in their sorrow and joy, Romero was already widely called “San Romero,” or Saint Romero, because that is who he was for them!
In a recent article by Catholic News Service on the beatification of Archbishop Romero, the following comment caught my eye: “During Archbishop Romero’s time as archbishop of San Salvador—from 1977 to 1980—kilos of letters against him arrived in Rome. The accusations were simple: He’s political; he’s a follower of liberation theology.” The complaints slowed the sainthood process, said Archbishop Vincenzo Paglia, the postulator or chief promoter of the archbishop’s sainthood cause. Yet, supporters of the cause, he said, collected “a mountain of testimony just as big to counter the accusations and to prove that Archbishop Romero heroically lived the Christian faith and was killed out of hatred for his words and actions as a Catholic pastor.”
What a blessing to have been a part of that. Remember: Our signatures do matter!
Josephine Lucker, M.M.

I recently moved into a new apartment just outside the Chinese city of Dali, which is on the ancient Tea-Horse Caravan Trail stretching across southwest China through Tibet and Myanmar and into India. In the quiet of my new setting, I can hear the call to evening prayer coming from the mosque in the adjacent neighborhood. China has a large Muslim population, something I didn’t realize until I moved to China 15 years ago. Muslims have been part of China’s economy and intelligentsia since the Mongol empire in the 13th to 14th centuries. As the barely audible prayer drifts on the wind into my room, I’m reminded that Muhammad almost certainly drew the call to prayer from the example of the desert monastic communities that called the monks to prayer up to nine times a day. The Muslim call to prayer makes me miss our morning bells at Mass and the Angelus that for centuries reminded Christians to pray throughout their day. I like the call to prayer. It reminds me of what is important in each day.
Larry Radice, M.M.

When I was assigned to Guatemala and El Salvador, I had the opportunity several times to visit Nicaragua. I once asked a few Central American seminarians what they thought of Nicaragua. They liked Nicaragua very much, but one replied, “In Guatemala we eat five tortillas with our meals, in El Salvador three and in Nicaragua two.” Even though it was more than 10 years ago, I have never forgotten that answer. Sometimes a few words tell you volumes about the local reality.
Mary Mullady, M.M.

Last February the Good Seedling Holistic Center where I work on the periphery of São Paulo, Brazil, was assaulted by three men while the center was full of clients. Another volunteer and I lost cell phones and money but fortunately no one was physically hurt. After that, though, the volunteer acupuncturist decided not to come back and other volunteers from the community were demoralized and stopped coming for a time. I, too, thought about giving up my work there.
A week later, Sam Stanton, executive director of the Maryknoll Lay Missioners, was visiting São Paulo and the center was on his schedule. We feared no one would show up because of the assault the previous week, but we gathered some volunteers to tell Sam about our work. One of them, Irene, told the group that God had sent Sam so we would find the courage to go on with the work. They felt his visit from so far away was affirmation of their mission in the community. Sometimes a visitor doesn´t know how important a message he or she may bring at a timely moment.
Flávio Jose Rocha da Silva, MKLM 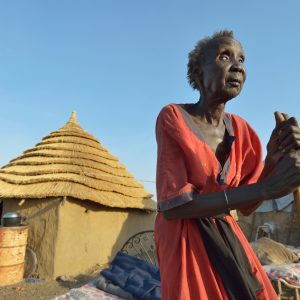 Missioner establishes eye clinic in a country where three out of four people lack healthcare || Two years ago Maryknoll...

Jul 1, 2015
Copyright 2020 Maryknoll Fathers and Brothers. All Right Reserved.
Back to top