With the Holy Spirit in Mabatini

The youngest Maryknoll priest, Father Lam Minh Hua, has taken his first steps as a missioner in the Mabatini settlement in Mwanza, Tanzania, helping people to grow in their faith and encouraging them to build their community.

When Father Hua, 30, was assigned less than a year ago to work in the Mabatini parish assisting the parish administrator, Father Pamphilius Madata, he was returning to a country he already knew. As a seminarian he had spent two years in Tanzania for overseas training, including studying Swahili and supporting Maryknoll missioners there.

Now in his pastoral ministry in Mabatini, Father Hua is working with a very young faith community. “Many of them are youths,” he says. “Although they seem to have great faith, their faith is still in its infancy.”

Transfiguration Parish, which was founded by Maryknoll Father James Eble in 2004, serves about 400 to 500 families divided into 22 small Christian communities. Besides Sunday Mass, once a week these communities get together to share their life and faith. “As part of the pastoral staff, I join them in prayer and reflection on the Gospel,” Father Hua says. “I encourage them to talk to each other about the different issues they are facing and how we can work together with the parish to resolve the issues. I try to give them the theological and spiritual support they need.” 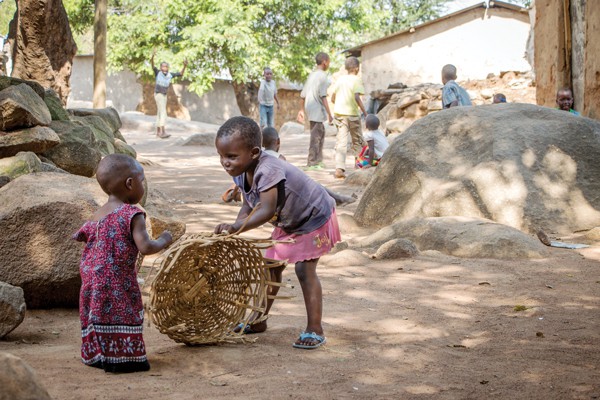 Children of the community of Mabatini in the Tanzanian city of Mwanza play amid the rocks that characterize the rugged terrain where the settlement was founded.

Mabatini, he explains, is an area of rocks on top of rocks, making it difficult for people to build and especially challenging for older people to navigate.

Part of Father Hua’s ministry is visiting the sick. Godwin Michael, a catechist in the parish for more than nine years, accompanies him. “Father Hua is very cooperative. He cares for others and follows the work until it is done,” says Michael.

Father Hua also helps with the parish health project, overseen by Maryknoll Lay Missioner Kristle Bulleman. The program offers seminars on health issues, cleanliness and environmental protection as well as eye exams and screening for blood pressure and sugar levels. “Sometimes people can’t afford to go to the doctor and these health issues can get corrected if people know what the problem is,” says Father Hua.

Natalia Kadio, who worked for more than nine years with Father Eble, now helps Father Hua, whom she describes as “friendly, bright and very energetic.”
“People love him so much,” she says. “Since many of us knew him as a seminarian, after his ordination we were praying for him to come back.”

Kadio adds that Father Hua is reinforcing the spirit of Maryknoll in Mabatini and helping to transform the community. “He listens and brings spiritual help. We hope that Maryknoll continues his mission here,” she says.

Father Hua also fosters educational programs for children and adults, which, he says, are sorely lacking in this community where people don’t even recognize their basic right to education. He is constantly looking for educational and faith formation materials in Swahili, as well as books just for people to read. 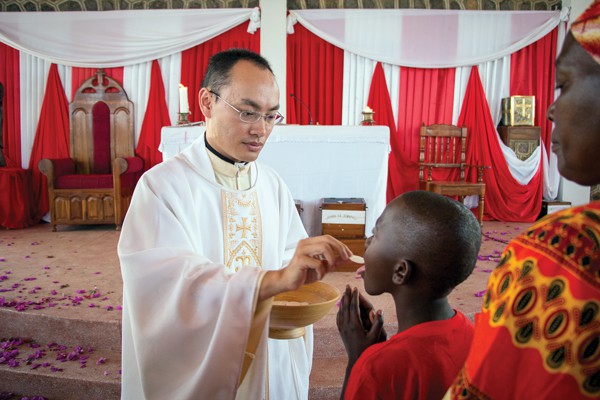 Father Hua gives Holy Communion to a boy in the Transfiguration parish church, which was built by his predecessor, Maryknoll Father James Eble.

Michael says that before Maryknoll missioners came to Mabatini, it was a place where stealing and drinking were prevalent. Now, he says, the area is respected and valued.

“It is a new Mabatini!” he exclaims. The love and care of Maryknoll missioners have transformed people, he says, explaining that after they were invited to be part of small Christian communities, many of the people gave up drinking and started looking for jobs.

Michael recalls when Father Eble first came to Mabatini in 2002. “He started visiting people house by house,” Michael says. He remembers Father Eble saying that people are first and that he built Mabatini parish together with them. Today, he says, Father Hua and Maryknoll Brother Loren Beaudry, who also works in the parish, continue to bring people together. “Those who are Christians and the ones who are Muslims feel as one because the Maryknollers do not divide them,” Michael says.

Father Hua says his faith journey began in Vietnam, where he was born, and was further nurtured in Washington State, where he moved with his family when he was 7 years old. “I grew up as a Catholic and have always been involved in the Church,” he says. “I had a very motivating and supportive family.”

He discovered his calling to mission late in high school after he read the biography of a Jesuit missionary and articles about missioners in Maryknoll magazine. After college, he entered the Maryknoll Society in 2007 and was ordained a Maryknoll priest in 2014.

As the young priest experiences the joys and challenges of mission, he has learned to pray and sing in Swahili, especially to the Holy Spirit. “I believe that only the Holy Spirit can get me through the difficult things that I see sometimes in people’s lives,” he says. “I think everything is in the work of the Holy Spirit, because I really can’t explain how people work through their difficulties and are able to find joy in their lives.”

How can I contact Fr Jim Eble?
Thank you in advance,

Dear Paul: We have forwarded your contact information to Father Eble. Thank you for your inquiry. 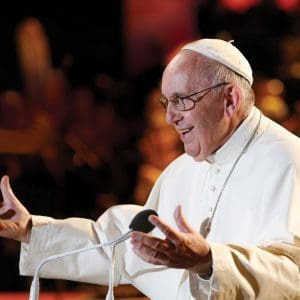 Reflection on Pope Francis' whirlwind visit to three U.S. cities || As any of the millions of people who turned out to encounter...