We begin this Year of Mercy with “mercy moments” from Maryknoll missioners.

Iwas living in Santa Rita, a relocation community of refugees in the Peten region of northern Guatemala, and stopped at our primary school during recess. All the children were enjoying a cup of incaparina (a high protein drink) and a piece of our own homemade baked bread. One of the kids accidentally knocked my piece of bread off the table and sent it rolling across the dirt floor. Another kid retrieved it and gave it back to me. I was looking at it skeptically when little Maria (photo below) said, “I’ll get you another.”
Off she went and soon returned with her cup and a piece of bread, which she handed to me. Realizing she was giving me her own piece of bread, I protested. But she insisted I take it. So we broke it and shared it. A mercy moment I treasure!
Martin Shea, M.M.

Rosa, a beautiful young woman we Maryknoll Sisters knew in our mission in South Sudan, was attacked by a man one night when she was on her way home. Fortunately she and some of her friends were able to fend him off and later identify the attacker.
At his trial, which was conducted by the village elders under the “meeting tree” in this isolated region of the country, the culprit was to be fined. Knowing that Rosa was as poor as a church mouse, one of our Sisters asked her how much she was asking for the fine.
Rosa answered, “Oh, Sister, I can’t take anything. I’m a Christian. I forgive him.”
Mary Ellen Manz, M.M.

In Cojutepeque, El Salvador, where I serve as a Maryknoll lay missioner, there is a prison smack in the town’s center. Some of the most notorious gang leaders are incarcerated there, and two soldiers constantly keep watch. The soldiers wear ski masks to protect their identity from gang members, whose jailed leaders have ordered them to kill off-duty soldiers.
As I walk by the guards, I see only their eyes, as shiny as the barrels of their M-16 rifles. They too have their orders: to stop anyone suspicious, especially young Salvadorans, and search them for gang tattoos. These soldiers are intimidating. I put my head down and move quickly past them.
Then one day I noticed a drunk sleeping at the feet of a soldier. The drunk suddenly woke up and pleaded for water. The soldier graciously handed him his canteen and the drunk proceeded to down the water in one chug, hand the canteen back and continue sleeping. This soldier’s act of spontaneous mercy touched me. Now when I walk past the soldiers, I try to make eye contact and exchange an unspoken nod of human fellowship.
Rick Dixon, MKLM

In South Korea at the National Leprosy Center, where I served as a Maryknoll Sister-nurse, I saw countless moments of mercy among the 4,000 patients who lived in very close quarters in the men’s section. I would see five or six men on mats on the floor helping each other, feeding one another, leading a blind man, holding onto a long bamboo pole to assist an amputee with his prosthesis, never quarreling or arguing, just making life the best they could for each other.
Joan Sauvigne, M.M.

During the past year in Sudan’s Nuba Mountains, where I was ministering as a Maryknoll priest, Hadiya, a widow, was at home when one of the single-room thatched houses in her compound caught on fire. Without hesitation, Hadiya rushed in to pull out the two young girls who were sleeping in the burning room. All three were taken to Mother of Mercy Hospital, where the two girls healed more quickly than Hadiya. She suffered with little complaint. I could not help but marvel at the mercy and compassion of this woman who risked her life to save others.
Thomas Tiscornia, M.M.

Another face of Mission

The Quality of Mercy 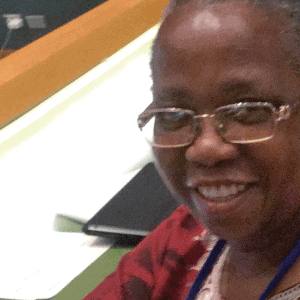 Another face of Mission

Maryknoll Sister who served the poorest people brings their concerns to the United Nations || When Sister Claris Zwareva,...