Mercy in The Former ‘Hindu Kingdom’

The second in our 2016 spirituality series celebrating the Jubilee Year of Mercy.

From my experience of four decades as a Maryknoll missioner in Nepal, the guiding principle of love, shown in care and mercy for other human beings, is amply present in the two main faiths of the country, Hinduism and Buddhism. It is lived out in compassionate deeds and right speech and proper attitudes toward others, whether in the family or in the workplace, and such are certainly outward signs of mercy.

In Nepal, the minority community of about 8,000 Catholics is also celebrating this Jubilee Year of Mercy. This year, they understand, provides them the opportunity to be more tolerant and tender. Catholics of Nepal, unlike many of the other 1 million Christians, do not hesitate to enjoy Hindu and Buddhist festivals, instead of shunning them.

Catholics here find themselves in the midst of a unique kind of Nepalese Hinduism that is tempered with the compassion of Buddhism, which came out of Hinduism. The majority of Nepalese believe in a God with an “innocent childlike heart.” If you would ask an elderly Hindu woman about sin and forgiveness, she might say, “You talk of the need to ask for forgiveness, but how can a God who has not condemned you in the first place forgive you?”

Tolerance has shown itself among the Nepalese in their non-revengeful attitude following the country’s 10-year civil war. When self-proclaimed “Maoist” guerillas launched a violent war in 1996, more than 16,000 Nepalese were killed in the conflict between the guerrillas and the army of Nepal’s last king. More than 3,000 are still missing. The two main leaders who launched this Maoist war both became prime ministers of the country. There has been a show of mercy from all sides, and no serious assassination attempts to settle scores have followed the 2006 peace accord.

Still, there are difficult situations in Nepal that continue to cry out for mercy, issues such as ethnic and caste divisions, religious tensions, the gap between the rich and the poor, people internally displaced by the civil war and environmental factors, refugees in Nepal, human trafficking and the hugh drain of youth from Nepal who migrate to other countries seeking employment. So, there remains in Nepal a need to be mindful of mercy to bring about a cessation of the ongoing distrust and violence, so that people can live in harmony and be respectful of each other’s dignity.

As Christians, we know that the most powerful message of Jesus is mercy. It is a mercy that accepts us as we are and a mercy that does not condemn us as a result of our status because of birth or external circumstances.

After the April 2015 earthquake that struck the middle of the country, killing almost 9,000 people and destroying countless buildings and obliterating entire villages, Maryknoll supporters, like so many others in the United States and elsewhere, showed tremendous mercy in an outpouring of generosity that has helped me and the Maryknoll Nepal team come to the aid of the most disadvantaged and vulnerable in this Himalayan Mountain nation. Nonetheless, thousands of victims are yet to receive relief from the government or aid agencies. Many thousands still live in temporary shelters, but they have shown a characteristic resilience and have often told me, “Yes, life is difficult, but we have each other and our animals also.”

I have learned much from the Nepalese: to have more patience, not to lose hope and to be compassionate. Nepalese are very good at living in the present moment, not the past or the future, just now! Nepal has the possibility to make the world a better place by showing how we can live with little yet find joy and happiness and experience God’s mercy in our lives. As mercy and compassion are so often shown to one another in this largely non-Christian country, I find myself among a people naturally attuned to Pope Francis’ Jubilee Year of Mercy. How appropriate is the line from Luke 6:36: “Be merciful as your Father is merciful.”

Chirendra Satyal, a Nepali journalist and a convert to Catholicism, contributed to this story. He has been a close friend of Father Thaler and Maryknoll in Kathmandu, Nepal, since 1978.

Featured Image: Maryknoll Fathers Raymond Finch, center left, and Joseph Thaler gather with Napalese children in the village of Bhimtar, where Maryknoll is helping to rebuild their school and many of their homes. (Photo courtesy of J. Thaler/Nepal) 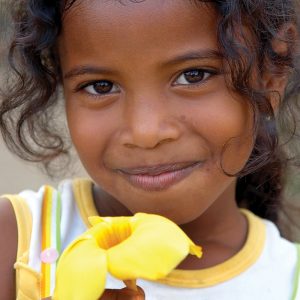 Missioner Tales, March & April 2016 A homily I heard recently reminded me of my ministry with women prisoners in São...

Mar 1, 2016
Copyright 2019 Maryknoll Fathers and Brothers. All Right Reserved.
Back to top