Since the summer of 2014, when the surge in migrants from Guatemala, Honduras and El Salvador began to overwhelm the U.S. Border Patrol and immigration courts, the United States has incarcerated thousands of mothers and children at family detention centers.

Administration officials had hoped that detaining families who crossed illegally would deter others from doing so. This has not been the case. The number of unaccompanied children and families crossing the U.S.-Mexico border in the last three months of 2015 had the sharpest rise since the summer of 2014.

Advocates, lawmakers and detainees continue to speak out against family detention, especially for the children. Jane O’Sullivan, a Maryknoll Affiliate and immigration attorney who volunteers to help detained families, wrote in our March/April 2015 issue about the suffering of families in detention. “Our government’s rationale that family detention is necessary to discourage other would-be refugees can never justify the harm to the detained children that I witnessed firsthand,” O’Sullivan said.

Recently, we checked in with O’Sullivan and she said: “Moms with kids are still being detained at three detention centers around the country—a prison in Berks, Pennsylvania; the Residential Detention Center in Dilley, Texas; and a prison in Karnes, Texas. Generally stays are much shorter now, but not always. Thirty families (in Berks) have been detained for more than six months.”

Many of these women and children are survivors of violence, poverty and family separation that have gotten worse in recent years. Homicide rates in 2015 confirm El Salvador and Honduras vie for the title of murder capital of the world, driving many families and unaccompanied children to flee for their lives.

Mothers and children in detention, victims of violence at home and on their journey to the United States, remain traumatized, isolated and fearful of the future and a confusing legal system. Last year, a federal judge ruled that detaining families for the sole purpose of sending a message to others unlawfully punishes a class of people and “as various mental health experts have testified, it is particularly harmful to minor children.” A report in the June 2014 issue of Lancet Global Health documented increased rates of deliberate self-harm and suicidal behavior, severe depression, poor eating, sleep difficulties, bed-wetting, anxiety, social withdrawal and post-traumatic stress reactions among children in detention.

Another U.S. judge ruled that family detention violates a federal standard that requires that undocumented children be held in the least restrictive setting possible and generally favors a policy of releasing them. The government countered by proposing that the centers be licensed as “child care facilities.” This does not change the fact that no one is allowed to leave.

We pray for the end of family detention and for the courage to welcome every stranger as Christ in our midst.

Share
with your parish the family detention resources created by the Justice for Immigrants Campaign, organized by the U.S. Conference of Catholic Bishops.

Read and share
a U.N. report on a new global strategy to end detention of asylumseekers and refugees. The first goal is to end the detention of children.

Send a letter
to President Obama to ask him to end family detention. 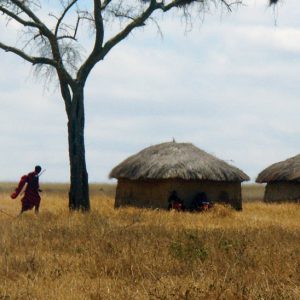 || Driving across the grasslands to a distant chapel to celebrate Easter during the rainy season in Tanzania. Halfway...