At the women’s prison in Macau, China, I was visiting one of the inmates who had recently arrived. “Where is your Bible?” she asked me.

Since the prisoners I visit usually bring their own Scripture readings to discuss, I did not bring a Bible with me.

I learned that this woman was not a Christian, but in the large cell where she was enclosed with several others, she was very impressed with the Catholic women who get together to share Scripture readings and prayer on a daily basis. “They have something that I don’t have and I want that!” she said.

Incarcerated though they may be, those Catholic women have become missioners to others in their cell. What a wonderful example that mission is everywhere and with everyone around you!

When I first came to Cambodia as a Maryknoll lay missioner, I decided to live with university students to learn about the young people I would soon teach. One evening I was sitting with a dozen or so Cambodian students in their dormitory study room. They were focusing on their university courses; I was studying Khmer, their language.

We were elbow to elbow in the oppressive heat sitting at little desks. The worst, though, were the mosquitoes. They were absolutely ravenous, and I was slapping and scratching and nearly going crazy. The young women all worked, once in a while lifting their heads to look at the flailing, pitiable foreigner.

I whispered to one, “How come I’m the only one getting bitten?” Then I jokingly added, “I must have sweet blood!”

We all continued to work. A few minutes later another student leaned toward me and whispered, “Teacher, we are all getting bitten.”

Cambodians tolerate being bitten by mosquitoes as they tolerate many difficulties caused by poverty, illness and corruption. Missioners must “take a seat” and live with the people in the midst of all this. This is solidarity. This is accompaniment.

When I served in the Juli District of Peru, a catechist asked me to intervene in a rural community dispute. I arrived at the scene to find men with clubs in their hands and women with crying babies on their backs shouting at one another. After I calmed them down, they explained the cause of the conflict. The community wanted to build a school, but some wanted it where they were standing while others claimed that parcel of land was private property. Not knowing exactly how to help them, I happened to look at the ground. Before me were two dung beetles pushing a ball of sheep manure up a small incline. I called everyone to form a small circle and watch the efforts of the two beetles. I said, “If two beetles can agree to work together for their common interest, why can’t you?” They all laughed and quickly decided to build the school on undisputed land. It was the spirit of God helping folks reconcile their differences and move forward to form a stronger community.

Here in Haiti, where I work as a Maryknoll Sister, I continue to journey with a group of single mothers who work together in a cooperative as they struggle to support their children. Through the Maryknoll Sisters Mission Funding Program, we were able to get a grant to set up a micro-credit program for them. The women are given a small loan, which they pay back in installments of five months. I have been very encouraged with their response. In five months, 99 percent of the women paid back the loan on time. One woman, however, could not pay three installments because she had given the money to her eldest son when he went to Brazil. He promised to repay her as soon as he got a job. Sixteen months have gone by and the woman has not heard from him.

When I brought the matter back to the group, I was moved to tears when the women said they would pay the money for their group mate. These were women who only a few months before did not trust each other or want to work as a team. For me this is one of the many miracles God is working among us. 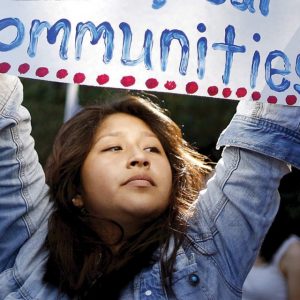 Since the summer of 2014, when the surge in migrants from Guatemala, Honduras and El Salvador began to overwhelm the U.S....