It was the last day of Pope Francis’ recent visit to Mexico when he celebrated Mass in Juárez. Maryknoll Sister Lil (Lelia) Mattingly was privileged to attend that Mass, simulcast on the other side of the border, in El Paso, Texas. She movingly shares her experience in this issue (see “Tears and hope in Juarez”). Sister Lil tells us that, recalling this Year of Mercy, Pope Francis offered a prayer: “With you I wish to plead for the gift of tears, the gift of conversion.”

We are reminded daily in print and during the evening news that thousands of people throughout the world are fleeing situations of oppression and ethnic cleansing, crossing multiple borders and desperately seeking peace, acceptance and a better life for themselves and their loved ones. But often, the pope says, our hearts have not been open to them. He calls us to repent for our lack of compassion toward our brothers and sisters. He also calls us to “shed tears” for our abuse of God’s creation and urges us to bring about with others a renewed creation that we can bequeath with pride to those who follow us.

Since his election in March 2013, Pope Francis has modeled for us Jesus’ teaching of faith in action not only through his own simple lifestyle but also as expressed in his official teachings and other pronouncements. He constantly reminds us that conversion of heart comes when we encounter God’s mercy that empowers us to turn our lives around. The Gospels give us many examples. Luke (7:36–50), for instance, describes Jesus dining at the home of a Pharisee when a woman who had led a sinful life seeks him out and washes his feet with her tears of remorse. Forgiving her because of the great love she has shown, Jesus starts her on the path of conversion.

What is the personal and communal recognition of our own neglect of one another and of our environment to which Pope Francis and Jesus are calling us? What is the change of heart and attitude that are being offered us? In his homily at the border in Juárez, Pope Francis said, “We still have time to transform what is destroying us as a people, what is demeaning our humanity.” How will we respond to this urgent call?

Robert Jalbert, M.M.
Father Robert A. Jalbert served four years in the U.S. Air Force as a Russian linguist in Italy and Turkey before earning a B.A. in English Literature from Holy Apostles Seminary College in Cromwell, Connecticut. He entered the Maryknoll novitiate in Hingham, Massachusetts in 1973, and after training in Tanzania earned his M.Div. in Theology from Maryknoll School of Theology, New York, where he was ordained in 1979.

Jesus was a Migrant

My brief Googling of “gift of tears” brought me, after some desolate patches, to Pope Francis, and so I added “conversion”, and came even closer to Pope Francis, and away from the desolation of regarding these tears, or this term, as a car wash for the soul, as someone described going to Mass: why not a drive-through?
I propose that conversion has a concrete meaning: a letting go of a wall of anxiety, to use a concept from Henry Nouwen in an address to a mixed audience at Notre Dame U. I saw once in a videotape. You could see how anxious he was himself to get across to his audience. He described how we build a tower of anxiety around ourselves, and each stone makes us even more anxious as we cut ourselves off, and yet we seek to solve the anxiety by adding even more stones.
My idea of desolation and consolation is Tom Green’s, in Opening to God. He compares desolation to water falling on a flat rock and consolation to water falling on a sponge. The water stands for what is happening. So consolation is letting things in.
But that image needs Fr. Nouwen’s corrective: this choice of rock or sponge is not A versus B, for we choose rock over and over again until it is hard to get ourselves into the other option.
When we do, it is natural to experience a tremendous sense of liberation, unburdening.
And this is the limit of my theory, for I see now that the tears may be the first step in the process and the letting in, the relenting, the “mellowing out” only the proper follow-on to this initial display of God’s grace: a sign that our being in the world of phenomena and each other is no accident. 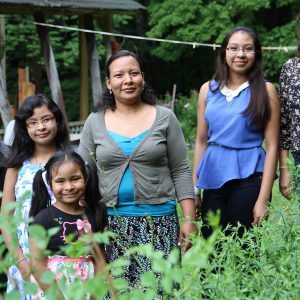 Jesus was a Migrant

Immigrant family gives Pope Francis copy of Orbis book || One frigid December morning six years ago, my husband and I were...