The fourth in our 2016 spirituality series celebrating the Jubilee Year of Mercy.

Before coming to Bangladesh in 1975 to begin a ministry of Christian witness, I never realized how important the concept of mercy is to the people of this predominantly Muslim South Asian nation. During these 40 years of living among Muslims in one of the poorest and most densely populated countries in the world, I have observed so many signs of mercy, beginning with the very names people bear.

Here, where every native male Muslim is named Muhammad in honor of their religion’s founder, I have discovered that most of them also have a second name taken from one of the 99 beautiful names of Allah—the word of God in Islam. The names describe the attributes of the Most High, including Wadud, (the loving one), Karim (the generous one), Gaffar (the forgiver), Rahman (the beneficent one) and Rahim (the merciful one).

The people have a saying, “Your smiling in your brother’s face is charity,” which highlights for me the similarity of Islamic and Christian thoughts on mercy. The acts that the Merciful One inspires in the Muslim faithful are kindness, sympathy, cooperation and help, much like the acts that result from Christian love.

In this Jubilee Year of Mercy I have reflected often on the many examples of mercy I have both witnessed and received.

As part of my ministry, I ride my bicycle to poor villages to seek people, particularly children, who are disabled and may be burdened for a lifetime by their physical conditions. With a small camera I take photos of their afflictions: cerebral palsy, burns, muscular dystrophy, cleft lips, hernias, tumors and broken bones caused by accidents. Then, I go to Dhaka, the capital, to show the photos to doctors, who make provisional diagnoses. With this information I help arrange for free treatment for these people at one of the government hospitals in the city.

One of these children was Suriana. Her mother was so grateful for her daughter’s successful operation that she urged her son, a student of Islamic law, to pray to the most Glorious One for me, their Christian helper.
One of my neighbors, Jasna, seeing that I was exhausted after a long morning in the bicycle saddle, urged me not to cook for myself that day, and offered me her own meal.

Kamrula, another neighbor, chided me for fearing that clothes I had left outdoors to dry would be soaked in a rainstorm while I was miles away. She took down the clothes before the rain, and later said: “You serve the poor, so don’t you think we want to serve you?”

In another town, Jahangir loaned me his cellphone to call a doctor for a sick person. Jahangir was very pleased to cooperate in an act of mercy and said: “The Merciful One has mercy on the merciful.”
I have been especially moved by the people’s kindness to one another.

When Shofiqul, a Rotary Club member, learned of a disabled and homebound boy, Iusub, in a faraway village, he sent a wheelchair that enables the boy to sit daily in the local market surrounded by people and action.

Rohima, a widow, lost her 8-year-old daughter, Shamee, from complications after surgery. Learning about Shamee’s death, one of Rohima’s distant cousins traveled 100 miles to comfort her and to accompany her back home with the girl’s corpse.

One day, I visited Nitu, a 7-year-old girl with progeria, a genetic disorder that causes premature aging and early death. Her mother often buys her new dresses and shoes, with money she needs for the seven other family members. “After Nitu is gone, our whole family would regret having refused the clothing she longed for,” the mother said.

Being a Christian living among Muslims, I am energized as I recognize mercy in their appreciation for people who live merciful lives. Their little acts of mercy and kindness make life worth living. As a song made popular in the United States half a century ago says, “Little things mean a lot.”

Featured Image: A mother in the Bangladeshi village of Narail thanks Father McCahill for visiting hersick child for whom the missioner will get medical treatment.(S. Sprague/Bangladesh)

Robert McCahill, M.M.
Father Robert McCahill, from Goshen, Indiana, was ordained a Maryknoll priest in 1964. He has served in the Philippines and presently in Bangladesh. 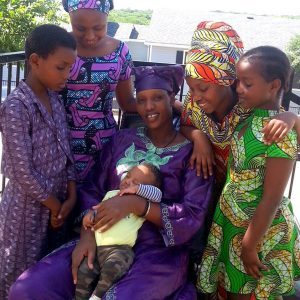 A Maryknoll Affiliate and members of her parish expand their vision by helping refugees find a home in North Carolina || Think...