A World Without Nuclear Weapons

Pope Francis’ virtues of courage, compassion and commitment to the Gospel are breathing new life into the campaign for nuclear disarmament.

“There is urgent need to work for a world free of nuclear weapons, in full application of the non-proliferation treaty, in letter and spirit, with the goal of a complete prohibition of these weapons,” the pope said in his speech to the U.N. General Assembly last September.

Yet, the five nuclear-armed nations in the non-proliferation treaty (the United States, Russia, United Kingdom, France and China) remain committed to “the indefinite possession of nuclear weapons.” And while President Obama began his administration seven years ago calling for a “world without nuclear weapons,” U.S. spending on nuclear weapons is at an all-time high, and includes a 30-year program to “modernize” the U.S. nuclear arsenal and production facilities.

The Cold War-era theory of deterrence—intended to keep other countries from attacking with their nuclear weapons through threat of “mutually assured destruction”—means always keeping nuclear weapons at the ready. In a seminal January 2007 op-ed in The Wall Street Journal, veteran Cold War policymakers Henry Kissinger, Bill Perry, George Shultz and Sam Nunn reversed their previous positions advocating deterrence, and asserted that far from making the world safer, nuclear weapons have become a source of extreme risk.

The current tensions with Iran and North Korea over their nuclear programs are the latest examples of the threat of continuing nuclear proliferation.

Pope Francis names a culture of fear that fuels the nuclear-armed nations’ desire to possess nuclear weapons and stresses the immorality of their possession. “The fear that drives the reluctance to disarm must be replaced by a spirit of solidarity that binds humanity to achieve the global common good of which peace is the fullest expression,” the Holy See said in a paper presented to the Vienna Conference on the Humanitarian Impact of Nuclear Weapons in December 2014.

This is a historic opportunity for the nuclear-armed nations to take the world to the next stage. A few weeks after Pope Francis’ speech to the U.N. General Assembly, the United Nations established an open-ended working group to address concrete effective legal measures, provisions, and norms that will need to be concluded to attain and maintain a world without nuclear weapons. The group plans to present a recommendation on nuclear disarmament at a meeting of the U.N. General Assembly in October.

Send a letter
to President Obama, who was scheduled to visit Hiroshima in May, asking him to follow through on his commitment “to seek the peace and security of a world without nuclear weapons.”

Send a copy
of “Nuclear Disarmament: Time for Abolition” to your elected officials. Urge them to insist that the United States honor its non-proliferation treaty obligations on nuclear disarmament and to support the start of negotiations on a treaty banning nuclear weapons. 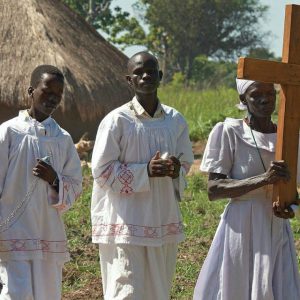 Missioner Tales, July & August 2016 Veronica Calleman is a member of the Catholic community I serve in the U.N. camp...