" /> Mission Came to Her | Maryknoll Magazine

From the time she was a young girl in St. James Parish in Dallas, Texas, Therese Caffey wanted to be a missionary.

“When I was in the fourth grade, I read Bernie Becomes a Nun by Maryknoll Sister Maria del Rey Danforth,” she says. This story of a young New York girl, Bernadette Lynch, entering the Maryknoll Sisters ignited Therese’s dream of serving as a missionary Sister overseas. Bernie went to Peru; Therese wanted to go to Mexico.

There was just one problem. Therese was born with cerebral palsy and contracted polio when she was 11 months old. Walking has always been difficult for her.
Nevertheless, her pastor, the late Monsignor Francis Leroy Becker, encouraged her to investigate religious orders that had overseas missions. They all said her physical limitations would be too much of an impediment.
Therese found another path.

She earned a bachelor’s degree in education and went on to earn a master’s degree in library science at the University of North Texas. Then she embarked on a 40-year career as a school librarian and religion teacher. She worked in five inner-city parochial schools in Dallas, ultimately spending 17 years at Our Lady of Perpetual Help School, where students were mostly poor immigrants from Mexico and Central America.
One day, a high school classmate, Patricia Ridgley, a Sister of St. Mary of Namur who was then director of the Maryknoll Mission Education Center in Dallas, dropped by Our Lady of Perpetual Help. “When she saw me with my students, she smiled and said, ‘You couldn’t go to Mexico, so Mexico came to you!’ ” Therese recalls.

“In a very real way, I am a missionary,” Therese says. “Being a missioner means to be sent, not necessarily overseas. The experience of working with kids who had nothing taught me so much.”

Therese never lost her love for Maryknoll. She joined the Maryknoll Affiliates when the North Texas Chapter was formed in the 1990s. She shares her wisdom and gentle humor with these mission-oriented people, who, she says, energize her own mission spirit. She assists in their ministry of providing formation for groups going on short-term mission trips.

Throughout her career, Therese says, she always joined the parish of the school where she was working. “I wanted the children to see me at Sunday Mass,” she says, “and follow me.” Now retired, she belongs to Holy Spirit Parish in the Dallas suburb of Duncanville. She lives in a tiny apartment with her cat, Ursula.

Needing a walker to get around hasn’t slowed her down. She serves on the advisory board of Mount St. Michael Catholic School in Dallas and volunteers in the school library and office. She is a leader in ACTS Retreats, a parish-based retreat program given by parishioners. (ACTS is an acronym for Adoration, Community, Theology, Service.) For 30 years she has been a member of the God’s Delight Covenant Community, a Catholic charismatic prayer community in Dallas. Friends and colleagues know they can call her day or night and ask her to pray with them.

Reflecting on the blessings she has received, Therese says, “Mission is an exchange, not just a one-way thing. That’s why I love it. The neatest thing for me is I don’t have to go out of my backyard to find that exchange. Mission keeps me young.”

Witnesses to These Things 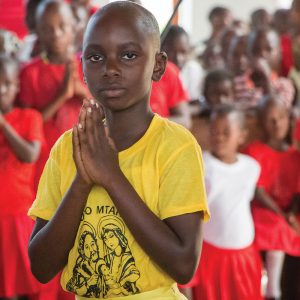 Witnesses to These Things

Today's Good News, July/August 2016 || Jesus repeatedly affirmed that he had come to do God’s work and was empowered...