Maryknoll missioners In Cambodia and Myanmar are seeing the return of fishermen who have been rescued from slave-like working conditions on Thai fishing boats in the seas off Indonesia. Recruited by false promises of a living wage, these vulnerable people incur crippling debts and suffer terrible abuse by their employers, some for years.

An estimated 45 million people worldwide are victims of trafficking, which uses force or other forms of coercion, abduction or deception for the purposes of exploitation, such as for sex or labor. Two-thirds of the world’s human trafficking occurs in the Asia-Pacific region, according to the Global Slavery Index for 2016. Trafficking occurs at all stages of the seafood supply chain, from catching fish to processing and shipping it for export. Coupled with global demand for cheap seafood, lawless conditions at sea enable this modern slavery to flourish.

Thailand is the world’s third-largest seafood exporter. A report by The Associated Press last year found that some seafood caught and processed by trapped and enslaved workers on Thai boats—mostly migrants from Myanmar and Cambodia—was shipped to the United States for sale at supermarkets and pet food stores.

The AP report includes details of what workers endure at sea: 18– to 20–hour workdays, seven days a week; hazardous and life-threatening conditions; inadequate food and blatant disregard for their basic medical needs and injuries. Employers routinely beat and torture workers to force compliance. Some workers are held at sea for years on large fishing vessels because of a lack of regulation. On land, women and even children working in the seafood processing and canning facilities are subjected to long hours, unsafe conditions, physical abuse and neglect of injuries.

As a result of the AP’s Pulitzer Prize-winning investigative reporting, more than 2,000 trapped fishermen have been rescued, more than a dozen alleged traffickers arrested and millions of dollars’ worth of seafood and vessels seized.

“One of the greatest concerns now is to help these traumatized people reintegrate into society,” says Father Kevin Conroy, a Maryknoll priest associate from the Diocese of Cleveland, on mission in Phnom Penh, Cambodia. “Many of them are returning to their families in debt and with medical, psychological and social needs. They also need help getting paid the wages promised them and taking legal action against the brokers and corrupt border officials who work in tandem to smuggle their victims and profit from this trade.”

As the largest importer in the world, the United States is in a unique position to demand information on what’s involved in the production of goods we use every day. Faith-based and civil society groups are working with Congress to pass legislation that will shine a light on business supply chains to ensure that companies do not use trafficked and forced labor.

Send a letter
to your members of Congress, to ask for their support of the Business Supply Chain Transparency on Trafficking and Slavery Act (H.R. 3226 and S.1968). The bill requires public companies with over $100 million in global gross receipts to publicly disclose any measures to prevent human trafficking, slavery and child labor within their supply chains as part of their annual reports to the Securities and Exchange Commission. Disclosures would be posted on the SEC and company websites for public access. It is a good first step toward improving reporting and transparency, enforcing existing laws against labor abuses and allowing consumers to make more informed decisions.

Read and share
“Seafood from Slaves,” the Pulitzer Prize-winning investigative report by The Associated Press on labor abuses in the seafood industry in Thailand.

Learn
how to be an ethical consumer.

A Gregarious, Cheerful Brother To All 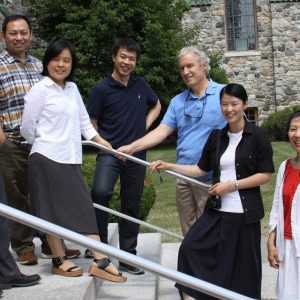